The Peerless Prognosticator is ON THE AIR!!! -- Game 17: Red Wings at Capitals, November 18th

The Washington Capitals, fresh off their 7-1 thumping of the Pittsburgh Penguins on Wednesday night, take the ice on Friday for the second of their season-long five-game home stand. The seven goal explosion was the high-water mark for goal in a game this season for the Caps and it comfortably surpassed the total number of goals they scored in their previous four games (five goals).

Meanwhile, the Detroit Red Wings are not making their last year in Joe Louis Arena a memorable one. It started out as if it might be such as season, the Wings 6-2-0 in their first eight games. However, in their last nine games they are 2-6-1, causing them to slip to seventh place in the Atlantic Division.

It is not as if the Wings have been blown out in their losses. Of their seven losses in their last nine games, four of them were by one goal and another (a 5-3 loss to the Winnipeg Jets on November 4th) featured an empty net goal by the Jets with less than ten seconds left in that game.

Detroit’s problem has been getting anything resembling consistent scoring. In their 2-6-1 slide they have just 16 goals (1.78/game), and they have been shut out twice. Dylan Larkin and Henrik Zetterberg split six goals over those nine games. Larkin is a bit of a curious case so far. With five goals on the season, he is roughly on a pace (24 goals) to match last year’s total as a rookie (23, tied for third among all 2015-2016 rookies). However, through 17 games he has just one assist, that coming on Opening Night in Tampa Bay against the Lightning. And, he has not been much of a road warrior, going 1-1-2, minus-6, in seven road games (he does not have a “plus” game on the road this year). In three career games against the Caps, Larkin is 1-1-2, plus-2.

Then there is Henrik Zetterberg. At 36 years of age, he is the oldest member of the Red Wings. And the way his season started, one might have thought the years were starting to show on his frame. In his first ten games, Zetterberg did not record a goal (although he did have four assists) and was a minus-1. In his last seven games he is 3-4-7, plus-1. His road performances have been uneven so far, going 1-2-3, minus-2, in seven road games but failing to record a single shot on goal in two of them. He was once one of the best two-way forwards in the league, going five straight seasons with at least 20 goals, at least 65 points, and five straight top-ten finishes in the Selke Trophy voting for best defensive forward (although he has never won it). However, he does not have a 20-goal season in his last four seasons coming into this one and cleared the 65-point threshold once (66 points in 2014-2015). His progress this season bears watching. In 17 career games against the Caps, Zetterberg is 6-6-12, minus-1. 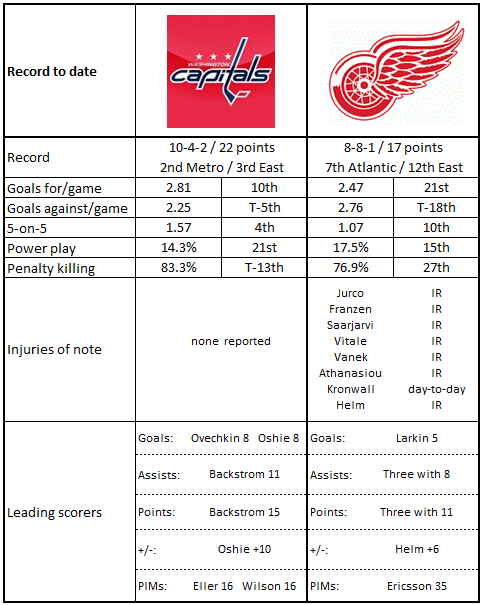 2.  Detroit has scored more than three goals on the road just once in seven road games this season, losing 6-4 to the Tampa Bay Lighting on Opening Night. Odd thing about that game. Detroit had 34 penalty minutes in the contest, a total surpassed just twice in a single game since the 2004-2005 lockout and not at all since February 18, 2008 in a 4-0 win over the Colorado Avalanche.

3.  Only three teams – the Toronto Maple Leafs (18), the Edmonton Oilers (18), and the Caps (19) – have more first period goals this season than Detroit (17). Trouble with that is that there are only six teams allowing more third period goals than the Red Wings (17).

4.  On the blue line, Mike Green has three goals. The other seven defensemen to dress for Detroit this season have a total of four. Green has 11 points. No other defenseman has more than four. Green is the third-oldest defenseman on the squad, and he is older than 15 other skaters on the team. The “Young Guns” days seem long ago.

1.  The seven-goal performance by the Caps against Pittsburgh on Wednesday night was the 13th time since the 2004-2005 lockout that the Caps scored seven or more goals in a single game on home ice. It was the third time they did so and scored both a power play and a shorthanded goal in the process. Oddly enough, in none of those 13 games did the Caps record as many as 40 shots, not even in their 10-2 win over the Boston Bruins on March 3, 2008 (10 goals on 34 shots).

3.  The Capitals’ plus-11 first period goal differential is far and away the best in the league (Columbus is plus-8).

4.  Nicklas Backstrom had three assists in his five-point effort against the Penguins. Since he came into the league, no player has more games with three or more assists than Backstrom (32). Sidney Crosby is second with 30.

5.  The Caps do a good job stifling opponents’ offense on an overall level. They rank fifth in Corsi-against per 60 minutes (51.67; numbers from Corsica.hockey).

Gustav Nyquist was a fourth-round draft pick of the Red Wings in the 2008 entry draft. He was a good, if not great goal scorer for a couple of years with the Wings’ AHL affiliate in Grand Rapids. Then, in the 2013-2014 season, he exploded for 28 goals in just 57 games. Since then, though, his goal scoring totals have been like air slowly leaking out of a balloon – 27 goals in 82 games and then 17 goals in 82 games last season. So far this season he has three goals in 17 games (a 14-goal pace), and he brings an 11-game streak without a goal into this contest. He has only three points on the road this season (all assists), and he has only eight shots on goal in seven road games. It is starting to show up in his ice time, which over the last four games has dropped from 22:53 to 18:37 to 15:25 and finally to 14:34 last Tuesday night in a 4-3 loss to the Lightning. Nyquist is 5-3-8, plus-2, in nine career games against the Caps.

If you had “Karl Alzner” as the Washington Capitals defenseman leading the team’s blueliners in goals almost one-fifth through the season, buy a lottery ticket. Until Wednesday night against the Penguins, he was the only Capital defenseman to score a goal this season (Dmitry Orlov got his first). Five other defensemen – John Carlson, Nate Schmidt, Matt Niskanen, Brooks Orpik, and Taylor Chorney are a combined 0-for-114 shooting. Some of that is expected; Orpik and Chorney would be hard pressed to get two goals combined this season (okay…Orpik had three last season, including his first regular season game-winner). However, Niskanen, Schmidt, and especially Carlson going this long without even an accidental, ricochet-off-two-sticks-and-the-pipe goal, is bordering on the bizarre. Last season, the Caps had seven defensemen record at least one goal, all of them represented on this year’s team, so you would think it is just a matter of time and continuing to pound shots on net. But it does look odd.

Perhaps the days of the Detroit Red Wings being the dominating team are over. Clearly, they are not the club that over a 12-season span won 50 or more regular season games five times, went to the Stanley Cup final five times, and won the chalice on four occasions. The last three seasons the Wings bowed out in the first round of the playoffs, and at the moment they look like a club that will struggle to make the postseason for the 26th straight year. It is a team that is having a devil of a time finding the back of the net, especially on the road (1.86 goals per game).  And their defense has shown cracks.   They have allowed four or more goals in five of their last eight games.  On top of that, the Red Wings have a rather lengthy injury list.

The Caps are hardly a team that can afford to be complacent about this game or this team, though.  One blow out win does not a winning streak make, and the 7-1 win on Wednesday means only that the Caps are 2-2-1 in their last five games.  But if the Caps come out as hungry as they were on Wednesday, they can get a good start on the weekend.