The Peerless Prognosticator is ON THE AIR!!! -- Game 47: Hurricanes at Capitals, January 23rd

The Washington Capitals enter their final week of the “first half” – the week preceding the All-Star Game break – looking to continue their successful 2017 year to date as they host the Carolina Hurricanes on Monday night at Verizon Center.

The Caps take an 11-0-2 record over their last 13 games into the contest after coming from two goals down to beat the Dallas Stars, 4-3, on Saturday night.  The Hurricanes will be trying to snap a three-game losing streak in which they have scored just four goals while allowing 14.  That is a very bad recipe to bring to Washington against a Caps team that has scored 58 goals in its last dozen games.  It is a departure from the offense that scored 26 goals over a six-game span before the drought hit.  Still, the Hurricanes find themselves just two points out of a playoff spot going into Sunday’s games.

Jeff Skinner is, to no one’s surprise, the leading point-getter on the club so far this season (17-18-35), on a pace to record his third 50-plus point finish in his past four seasons.  On January 13th, Skinner had two goals and an assist in a 5-2 win over the Buffalo Sabres to become the 15th player in franchise history to reach the 300-point mark with the club.  Unfortunately for the Hurricanes, he does not have a point in four games since reaching that plateau.  Skinner is 11-11-22, plus-1, in 31 career games against the Caps.

It is a mark of the turnover on the club that the next two top scorers are names that might not be household names in the long rivalry between these teams.  Victor Rask was a second-round draft pick by the Hurricanes in the 2011 entry draft.   After spending two years in Canadian juniors and parts of two seasons with the Hurricanes’ farm team in Charlotte in the AHL, he joined the parent club in 2014-2015.  His progress over his two and a half NHL seasons has been steady.  After going 11-22-33 in 80 games in his rookie season, he went 21-27-48 last season.  With a 13-19-32 scoring line so far this season, Rask is on a pace to continue his progress in scoring numbers (projected 23-34-57).  He has gone cold of late, though, going without a point in his last four games.  That might not be all that it seems, though, since the Hurricanes are just 12-9-3 in the 24 games in which he has a point this season.  In ten career games against the Caps, Rask is 1-4-5, even.

Sebastien Aho is third in scoring for the Hurricanes so far this season (12-13-25).  His 25 points ranks seventh among league rookies, and his 12 goals ranks third among the rookie cohort, trailing only Patrik Laine (21) and Auston Matthews (22).  He has picked up his goal scoring pace of late with nine goals in his last 21 games, a 35-goal pace per 82 games.  Unfortunately for the Hurricanes, his scoring has not been an accompaniment to winning.  Carolina is just 7-8-4 in games in which Aho recorded a point so far this season.  He has been quite successful against the Caps, though, going 2-3-5, plus-3, in two games against Washington. 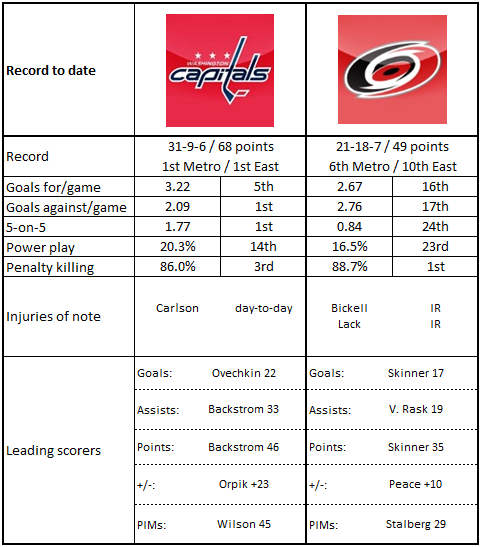 4.  Carolina is the least penalized team in the league in minutes per game (5:57).  Only 14 times in 46 games have they logged more penalty minutes than their opponents, and they have been shorthanded fewer times (115) than any team in the league this season.

4.  If Washington scores a power play goal against Carolina, it would tie a season-high five straight games with at least one power play goal, accomplished in Games 26-30 in mid-December.

5.  The Caps have the second-best Corsi-for at 5-on-5 (adjusted for score, zone, and venue) in the league at 53.13 percent, trailing only Boston (55.34 percent).  Their goals-for percentage is right in line with that, tops in the league at 63.86 percent, well ahead of Minnesota (60.12 percent; numbers from Corsica.hockey).

Lee Stempniak is one of those many foot soldiers in the NHL who carve out a career by having enough versatility to make himself attractive to any number of teams.  Carolina is the tenth franchise for which he has played in a career covering 12 seasons and 836 regular season games.  For six of franchises he skated for, he logged fewer than a season’s worth of games, including the 46 games played to date for Carolina.  It is not unreasonable to think that before the end of this season he will find his way to his 11th city in his NHL career, depending on whether the Hurricanes can sustain their challenge for a playoff spot as the trading deadline approaches.  What he is not is a good luck charm.  Carolina is just 3-4-1 in the eight games in which he recorded a goal this season.  In 21 career games against the Caps, Stempniak is 4-9-13, minus-1.

You might not always see him or notice him on the ice, but he’s there more often than any other Capital.  Since he arrived in Washington in the 2014-2015 season, no Capital has recorded more games with at least 22 minutes of ice time than Matt Niskanen (150 games to John Carlson’s 137 games).  His ice time has only increased in recent games, especially with John Carlson on the shelf with an injury.  Niskanen has been over 22 minutes in 11 of his last 13 games and averaged almost 24 minutes a game over that span.  On top of that, Niskanen is on a pace to challenge his career high in points (46), recorded with Pittsburgh in 2013-2014.  With 19 even strength points in 45 games, he would seem good bet to top his career best in points at evens (31 in 2013-2014).  He comes into this games with multi-point games in three of his last four games (2-5-7, plus-2).  What Niskanen does not have is a goal against the Hurricanes in his career.  He is 0-10-10, plus-2, in 27 career games against Carolina.

This will be the 104th meeting of these two teams since the Hurricanes took up residence in Carolina after their incarnation as the Hartford Whalers.  The Caps hold a 57-31-8 record (with seven ties) in that span.  Almost half of those wins were of the one-goal variety, though (28).  This season the teams split two games in Raleigh, the Caps losing a 5-1 decision on November 12th, then winning a 4-3 trick shot decision on December 16th.  The Hurricanes have hardly been an easy mark, despite their rank in the standings.  However, the Caps do have the second-best home record in the league (18-5-1), trailing only Pittsburgh (20-2-2), and they are 7-0-1 in their last eight home games.   This will be the Caps only home game in a seven-game stretch that started last Monday in Pittsburgh and ends in Brooklyn against the Islanders on January 31st.  Get home cooking while it’s available.