The Peerless Prognosticator is ON THE AIR!!! -- Game 40: Capitals at Canadiens, January 9th

The Washington Capitals reach Game 40 of their regular season on Monday night when they visit Montreal to face the Canadiens at Bell Centre.  The Caps will be looking to extend their current winning streak to a season-tying high of six games, while the Habs will be trying to win their fourth straight game extend their points streak to seven straight games.

Both teams have been experiencing one-goal decisions with frequency in recent games.  The Caps have had eight such decisions in their last 11 games (going 4-2-2, one of the losses a 2-1 decision at the hands of Montreal on December 17th), while the Canadiens had five straight extra-time decisions and six straight one-goal games before taking down the Toronto Maple Leafs, 5-3, on Saturday night.

Montreal comes into this game a team crippled by injuries.  Six players are currently on injured reserve who account for 27 of the team’s 123 goals scored so far this season (22.0 percent).   And, the absences have been spread around the roster - defensemen Greg Pateryn and Andrei Markov; forwards Alex Galchenyuk, David Desharnais, Andrew Shaw, and Brendan Gallagher are, for the moment, on the shelf.

That has placed a premium on defense and goaltending, and that means the focus, even more than usual, is on goaltender Carey Price.  He certainly seems up to the challenge.  His 2.06 goals against average matches that which he had last year, although he was limited by injury to just 12 games last season.  His save percentage is at .930, to date his third straight season with a save percentage of .930 or better.  Of 58 goalies with at least 2,500 minutes over the past three seasons, Price leads all of them in goals against average (2.00) and save percentage (.933).  He ranks fourth in shutouts (13), but his shutouts per games played (0.12) is well clear of every other goalie in the group.  He has been un-“Price”-like lately, though.  In his last five games, he is 2-1-2, 2.94, .904.  Price is 6-9-4, 2.97, .900, with one shutout in 19 career appearances against the Caps.

One Canadien doing his best to cope with the injury plague is Max Pacioretty.  Montreal’s leading scorer at the moment (19-15-34) is one of three players to record a five-point game this season, recording four goals and an assist in a 10-1 win over the Colorado Avalanche on December 10th.  His four goal effort in that game is one of just two such games this season (Toronto’s Auston Matthews has the other in what was his first NHL game back on October 12th).  Pacioretty has been quite productive of late.  Since December 4th, he is 14-5-19, plus-2, in 16 games and has points in eight of his last ten contests.  In 24 career games against the Caps, he is 2-9-11, minus-2.

So, how’s that trade looking?  That would be the trade of defensemen the Canadiens and Nashville Predators pulled off to send P.K. Subban to Nashville and bring Shea Weber to Montreal.  At the moment, Weber has the superior numbers, ranking second among league defensemen in goals (10), fifth in total points (26), and tied for seventh in plus-minus (plus-17), while Subban is 7-10-17, minus-11.  Weber has the distinction of being the only Canadien defenseman to appear in all 40 games this season, another indicator of how the impact of injuries is running through the team.  He comes into this game on a four-game points streak (1-5-6) and points in six of his last eight contests.  Weber is 3-7-10, plus-2, in 13 career games against the Capitals. 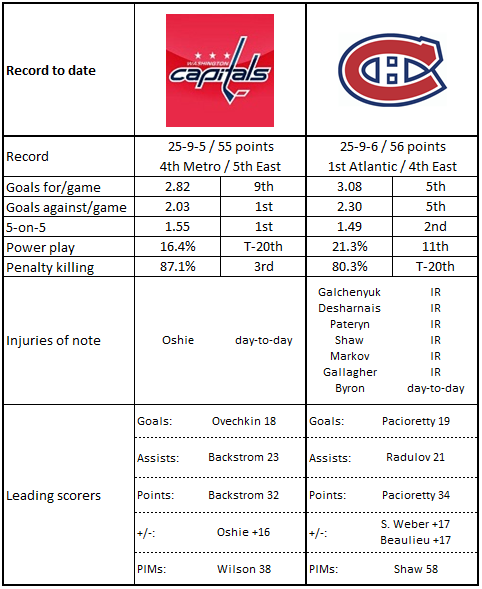 1.  The injuries seem to be a recent phenomenon for the Canadiens.  According to mangameslost.com, Montreal has lost 118 man-games through Saturday’s contests, 13th most in the league.

2.  The three-game winning streak the Canadiens bring into this game is their longest such streak in almost two months, when they had a four-game streak from November 5th through November 12th.   That they are still 25-9-6 is largely a product of their 13-1-1 start to the season.  They are 12-8-5 since.

3.  First intermissions matter to the Canadiens, at least when they trail.  The have just one win this season when trailing after 20 minutes and have the fourth-worst winning percentage (.111/1-6-2).

4.  This game is not likely to be a blowout, but if it is, it might not end well for the Caps.  Montreal is tied with Minnesota for the league’s best winning percentage in decisions of three or more goals (.900/9-1).

1.  The Caps have allowed two or fewer goals in five of their last six and six of their last eight games.  They have three shutouts in that eight-game span, all of them authored by Braden Holtby.

2.  At the other end, the Caps have 20 goals in their last five games, their most prolific five-game stretch of the season.

5.  The Caps take a pretty good possession record on the road. They are sixth overall in Corsi-for at fives in road games (51.86 percent) and are second in Corsi-for adjusted for score, zone, and venue (54.74; numbers from Corsica.hockey).

It took a while, but perhaps at the age of 30, Alexander Radulov has finally found his place in the scheme of things in the NHL.  Once upon a time, he was a 15th overall draft pick of the Nashville Predators (2004), and when he posted 26 goals and 58 points in his sophomore season in 2007-2008, big things were expected of him.  However, in the summer of 2008 he signed a three-year contract with Salavat Yulaev Ufa in the KHL, despite his having time remaining on his contract with the Predators.  It made for a contentious summer between player and NHL club, eventually resulting in Radulov’s suspension without pay by the Predators.  Radulov went on to play four years in the KHL before returning to Nashville for the end of the 2011-2012 seaosn.  It didn’t go well before it got worse.  Radulov went 3-4-7, plus-3, in nine regular season games, but it was what he did off the ice that threw sand in the gears of his career.  He and a teammate were seen at a bar in Arizona in the early morning hours before a playoff game against the Coyotes.  For the Predators, it was enough.  He (and the teammate) were suspended, and the club declined to extend Radulov a contract offer.

Radulov returned to the KHL to play for CSKA Moscow on a four-year deal.  One might have thought that his NHL days were at an end.  But last summer, he signed a one-year contract with the Canadiens.   Montreal would seem to have few regrets.  Radulov is second on the club in total scoring (31 points) and is one of four players with ten or more goals.  He is second on the club in power play points (10), and he has appeared in 38 games, no mean feat on a club that seems to be losing players on almost a daily basis.  He does not have a point and is minus-2 in two career games against the Caps.

The quirky bit of trivia surrounding this game is that if the Caps win, they will leapfrog Montreal in the standings, and the top four spots in the Eastern Conference standings will be held by Metropolitan Division teams.  Given that the Metro went 3-1 in Sunday night’s games (the only loss by Philadelphia to division rival Columbus), winning means keeping up.  This promises to be a close, low-scoring game.  That has been the recent history of this series.  Of the last seven contests played between the clubs, six were one-goal decisions, three of those settled in extra time, two in the Gimmick.  The Caps are 3-2-2 against the Habs in those seven games.  Twice, the winner scored just one goal in regulation (Montreal won a 2-1 game in a shootout and a 1-0 game in overtime).  Yes, this should be close and low scoring.