The Peerless Prognosticator is ON THE AIR!!! -- Game 1: Opening Night, Capitals at Senators, October 5th

“A journey of a thousand miles must begin with a single step.”
-- Lao Tzu

About 250 days from now, National Hockey League Commissioner Gary Bettman will stand at center ice in one of the league’s 31 arenas and present the captain of the league champion with the Stanley Cup.  The one wish that all of Capitals Nation shares is that wherever that might be, the captain to whom that Cup is presented represents the Washington Capitals.

Before we can enjoy that happy ending, though, we must have a beginning, and for the Capitals, it all starts on Thursday night when they visit the Ottawa Senators at Canadian Tire Centre.  The Senators are coming off a 44-win campaign in 2016-2017, a win total last topped back in 2006-2007, when Ottawa won 48 games on their way to the Stanley Cup final.

It was something of an odd outcome that the Senators finished 44-28-10 last season, owing to the fact that they were underwater in scoring, averaging 2.51 goals per game while allowing 2.56 goals per contest.  They were not especially efficient on special teams, either, with a “special teams index” value (power play plus penalty killing percentages) of 96.7 (17.0 percent/23rd on the power play, 79.7 percent/22nd on the penalty kill).

What the Senators were able to do is earn points in one-goal games.  They earned at least a point in 31 of 40 one-goal decisions (21-9-10), their 21 wins in those outcomes tied with the Edmonton Oilers sixth-most in the league.  Ottawa also had a curious distribution of goals allowed that might have contributed to their winning record.  They tied the St. Louis Blues for the ninth-highest number of games with two or fewer goals allowed (42).  It paints a picture of a team that plays games close to the vest. 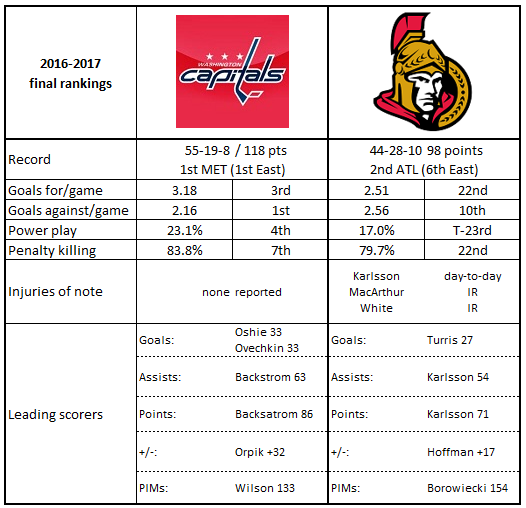 2.  The Senators might be hoping for a little more roster continuity than they had last season.  In 2016-2017 they dressed 36 skaters and four goaltenders.

3.  Craig Anderson enters the season as the all-time leader in games played by goaltenders in Senators’ history (293).  He also is the franchise leader in wins (151) and save percentage (.920; minimum: 100 games).

5.  The Senators played the Gimmick to their advantage last season, finishing with six trick shot wins, tied for third most in the conference.  The odd thing there is that of the two teams ahead of them in freestyle wins and the team they were tied with, none made the postseason (Detroit, Philadelphia, and Arizona).

1.  The last time the Capitals won a season-opening game on the road was October 1, 2009, when they defeated the Boston Bruins at TD Garden, 4-1.  In the spirit of “plus ça change, plus c'est la même chose,” now former Cap Brooks Laich scored a pair of goals in that game, as did current captain Alex Ovechkin.  The Caps are 0-3-1 in road openers since then, squeezing out a point in last season’s 3-2 Gimmick loss to the Pittsburgh Penguins.

2.  This will be the first time the Caps opened a season in Canada since they visited the Toronto Maple Leafs to start the 1997-1998 season.  Maybe it’s a good omen.  The Caps defeated the Maple Leafs that night, 4-1, and they went on to play in their first and, to date, only Stanley Cup final that season.

With Erik Karlsson still rehabilitating after off-season foot surgery, Kyle Turris opens the season as the active leader in goals scored as an Ottawa Senator (114).  Turris, who will be in his seventh season with the club after being traded by the Phoenix Coyotes in mid-season in 2011-2012, is entering the last year of his current contract with the Senators that pays him $3.5 million.  He had his best goal-scoring campaign as a Senator last season when he scored a career-high 27 goals, six of them game-winners, tying a career-best.  Only one of those goals came against the Caps last season, the only goal the Senators would score in 2-1 loss to the Caps on New Year’s night.  In 16 career games against the Caps, Turris is 7-3-10, plus-10, that last number equaling the plus-10 he has in 25 games against the Buffalo Sabres as his career high. He also has three career game-winning goals against Washington, tied for most against any team he has faced.

In his ten-season career, Nicklas Backstrom has 11 points in season-opening games, tied for second in team history over the last 30 years.  The odd part of that is that he has done it without the benefit of scoring a goal.  His point total comes on 11 assists, most in season openers in team history.  Although he is coming off his second-highest goal total of his career (23; he had 33 in 2009-2010), he reached that number not having outsized shot totals (162; fifth-highest in his ten-year career) or shooting percentage (14.2 percent/fourth-highest).  It was a solid year from one of the (still) unheralded all-around players in the league.  Consider that Backstrom garnered votes for the Hart Trophy as MVP (he finished ninth), Lady Byng for sportsmanship and gentlemanly conduct (tied for 26th), Selke for best defensive forward (seventh), and league all-star team (third among centers).  Only one player in the league received votes in more award categories, Auston Matthews, and only by virtue of the fact that he was a Calder Trophy-eligible rookie (Matthews won that award last season; Backstrom finished second in that voting in 2008).  In 34 career games against the Senators, Backstrom is 10-19-29, plus-10.

It is fair to say that the Ottawa Senators will provide an early benchmark on where the Caps are to start the season.  The Senators were a frustrating opponent for last year’s Presidents Trophy winners.  Although the Caps won the season series with a 2-1-0 record, they managed just three goals in the three games and were shutout once.  Even without elite defenseman Erik Karlsson, they seem likely to present that sort of a profile once more.  The immediate area of concern for the Caps is finding the offense they lacked in the preseason, one in which they managed just 12 goals in seven games, eight of those goals coming in two contests.  But allowing 24 goals in the seven games cannot be dismissed, either.  One hopes preseason games are poor indicators of the start (or finish) a team might have.