The Peerless Prognosticator is ON THE AIR!!! -- Game 13: Islanders at Capitals, November 2nd

An 82-game season spanning six months will have its ebbs and flows, its intense back-to-back and three-games-in-four-nights stretches, and the calm of days off between games. The Washington Capitals seem to be in one of those calm stretches at the moment as they prepare to host the New York Islanders on Thursday night at Capital One Arena. It will be only the fourth game in 12 days for the Caps and the first at home since a 4-1 loss to the Florida Panthers on October 21st.

Meanwhile, the Islanders will be coming to Washington for their first contest since pinning a 6-3 loss on the upstart expansion Vegas Golden Knights on Monday. Those six goals scored appear to be no fluke. New York has not scored fewer than four goals in any of their last five games and have averaged 5.2 goals per game in that span, posting six in each of their last two games.

Over those five games John Tavares had been all but unstoppable. His nine goals over that span (more than a third of the team’s 26) would, by itself, rank tied for fourth overall for the season. But as it is, the hot streak lifted Tavares into second place in the league with 11 goals, two behind Tampa Bay’s Nikita Kucherov. Tavares’ scoring has an odd quality to it, though, in a couple of respects. First, when he scores, he does it in bunches. His 15 points this season (11-4-15) have come in just five of the Islanders’ 12 games, and he was a multiple-point producer in each of them. Then there is his home-road split. Tavares is 8-4-12, plus-9, in five home games so far, recording points in four of them, all of them Islander wins (his lone game without a point ended in a Gimmick loss to the St. Louis Blues). On the road it is a different story. In seven road games, Tavares has a hat trick against the Nashville Predators (in a 6-2 win on October 28th), but not a point in any of his other six road contests, and he is a minus-5 overall on the road. In 30 career games against Washington, Tavares is 12-14-26, plus-6.

Josh Bailey is the other Islander with double digit points in this five-game stretch (1-9-10, plus-7). It is part of what is a longer seven-game points streak for the ten-year veteran. That he is this productive in recent games is likely unsustainable, but his being a reliable producer might not be much of a surprise. Last season, dressing for all 82 games for the first time in his career, he set career highs in assists (43) and points (56, obliterating his previous high – 41 points in 2014-2015). The plus-9 he takes into Thursday’s game is already, at least for how, his career best. His scoring matters at this early stage, the Islanders posting a 6-2-0 record in games he recorded a point. And, his home-road split is a bit more balanced than his teammate, Tavares. In five home games, Bailey is 2-6-8, plus-7, while in seven road contests he is 1-5-6, plus-2. He is 4-8-12, minus-8, in 36 career games against the Caps.

Jaroslav Halak has been a model of consistency in goal for the Islanders this season. In seven appearances in which he played the entire contest (he had one 28-minute no-decision in his first appearance this season), he has allowed exactly three goals in six of them. That he is facing more shots lately is improving his save percentage, and it also seems to agree with him on a wins-losses basis. After not facing more than 30 shots in any of his first four appearances this season (1-2-0, 2.62, .907, 28.3 shots per 60 minutes), he hasn’t faced fewer than 30 in his last four, but carries a four-game winning streak (4-0-0, 2.69, .921, 34.3 shots per 60 minutes). He has had, as they say in another sport, great run support with the Islander offense humming along as it has. Halak, who has the best postseason save percentage against the Caps of any goalie appearing in five or more playoff games against the Caps since 2005-2006 (.933 in 13 games), has had a comparatively mediocre record against them in the regular season: 8-7-0, 2.66, .907, with one shutout in 15 career appearances. 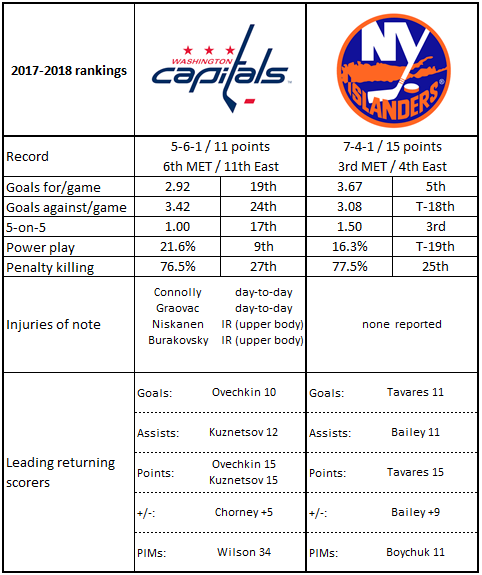 1.  What’s with the bench minors? Through Tuesday’s games, only the Toronto Maple Leafs (five) had more than the Islanders (four).

2.  “Thou shalt not steal”…only five teams have fewer takeaways than the Islanders (67). Minnesota, Nashville, and Montreal each have 66, Philadelphia has 56, and Anaheim has 55 through Tuesday’s games.

3.  Jay Beagle might get to pad his faceoff stats against this team. They are 27th in faceoff winning percentage (46.9 percent). Among the six players taking at least ten draws, only Casey Cizikas is over 50 percent (50.6 percent).

1.  The penalty box has been something of a second home on the ice for the Caps this season. Only three teams have taken more minor penalties than the Caps (62, tied with Anaheim): Detroit (63), Nashville (69), and Pittsburgh (70). Add to that three bench minors (tied for eighth-most), and it’s a lot of penalty time. Only three teams have been shorthanded more than the Caps (51, tied with Tampa Bay, Chicago, and Anaheim): Nashville (53), Pittsburgh (53), and Detroit (55). The Red Wings and Penguins have played one more game than the Caps through Tuesday.

2.  On the other side, the Caps have had just 37 power play opportunities, sixth-fewest in the league (tied with Winnipeg). And the home power play…woof. It is 1-for-15 (6.7 percent), tied for the fewest opportunities (with St. Louis) and tied for second-worst in efficiency (with Chicago).

3.  This could be a battle of shorthanded goals. The Caps have allowed the third-most of that category (four), while the Islanders are tied for allowing the most (six, with Buffalo).

4.  First periods are putting the Caps in a hole early. Their goal differential of minus-11 (21 allowed, ten scored) is worst in the league by a lot. The New York Rangers are minus-7 (13 scored, 20 allowed).

You might not think Jordan Eberle, having been drafted by and having played seven seasons with the Edmonton Oilers before being traded to the Isles last June for Ryan Strome, has a connection to the history of the Washington Capitals, but he does. Turn the clock back to June 20, 2008, at the NHL entry draft in Ottawa. The Washington Capitals had the 23rd pick of the first round of that draft. It was, as it turns out, an impressive draft, what with Steven Stamkos, Drew Doughty, Alex Pietrangelo and Erik Karlsson taken among the first 15 picks. But there the Caps were with that 23rd overall pick. Apparently, they had a player in their sights were he to be available. And apparently, they thought the team immediately in front of them in the order – the Edmonton Oilers – were looking at the same player. So, the Caps traded the 23rd overall pick plus the Caps’ second round pick in that draft (54th overall) to the New Jersey Devils for the Devils’ pick in the first round, 21st overall, thus leap-frogging the Oilers. With that 21st overall pick the Caps took Anton Gustafsson. The Oilers took Jordan Eberle with the next pick. Gustaffson played one professional game in North America (with the Hershey Bears in the 2009-2010 season); Eberle has 391 points in 519 regular season games in the NHL. Of that total, Eberle is 1-2-3, minus-4, in nine career games against the Caps. Oh, and as for that 54th overall pick that went to New Jersey…/1

After a hot start with nine goals in his first five games, Alex Ovechkin has hit a dry patch with one goal in his last seven games and none in his last four contests.  He does have four assists in his last three games, three of them coming in the 5-2 comeback win over the Edmonton Oilers last Saturday.  That also happens to be the only game so far that the Caps won in which Ovechkin did not score a goal (1-5-1).  As Ovechkin goes, so go the Caps has been, to a large extent, true over the course of his career, but the first dozen games and Ovechkin’s influence on them (or lack of it) and its effects on outcomes is not sustainable if the Caps are to be successful this season.  Another dimension to this is his ice time, which is a bit of a proxy for his influence in an odd sort of way.  The Caps have lost both games in which he logged more than 20 minutes, both of them by multi-goal margins (6-2 to Vancouver and 2-0 to Toronto, although the second goal in that game was an empty-netter).  In 46 career games against the Islanders, Ovechkin is 34-16-50, plus-8.

Time’s a’wastin’. The Caps, pending the outcome of Wednesday night’s games, are in 11th place in the Eastern Conference, two points behind the Philadelphia Flyers for eighth place (the Flyers face the Blackhawks in Chicago on Wednesday night). It does not sound like much, and all things considered, it isn’t. But the Caps have been: a) mediocre overall, and b) underperforming in their light home schedule to date. In one of the odd coincidences between this season and last, the Caps did not lose their fourth game in regulation on home ice last year until Game 12 on their home schedule, a 3-0 shutout at the hands of these same Islanders. Here we are at Game 5 of this year’s home schedule, and the Caps are in jeopardy of losing their fourth game in regulation…to the Islanders. Well, as the Cowardly Lion put it in “The Wizard of Oz”… NOT no how!

1/ The Devils selected Patrice Cormier with that 54th overall pick in 2008. After an on-ice incident in juniors and his subsequent suspension in 2010, he was part of a trade (one that included Johnny Oduya, Niclas Bergfors, and a 2010 first round draft pick) to the Atlanta Thrashers for Ilya Kovalchuk.