The Peerless Prognosticator is ON THE AIR!!! -- Game 22: Flames at Capitals, November 20th

The Washington Capitals will skate the second game of their four-game home stand on Monday night when the Calgary Flames visit Capital One Arena.  For the Caps, it is a chance to extend their home winning streak to six games.  The Flames will be looking to build on a road win against the Philadelphia Flyers last Saturday that evened their record on their current six-game road trip at 1-1.

Calgary has been rather leaky of defense as of late, allowing four or more goals in five of their last six games overall and averaging 4.67 goals allowed overall in that span.  And that means the goalies have been shelled.  It has been especially difficult for Mike Smith, who in five appearances over that span does have three wins in four decisions, but has a goals against average of 4.09 and a save percentage of .872.  It is quite a turnaround for Smith, who over his first 12 appearances this season had a goals against average of 2.19 and a save percentage of .936.  As it is, his .919 save percentage overall is still his best since he was .930 for the Phoenix (now Arizona) Coyotes in 2011-2012 and is his second best career mark in his 12-year career.  Smith has been an effective performer on the road this season, going 5-1-0, 2.13, .943 in six appearances.  In 13 career appearances against the Caps, he is 3-8-1, 3.42, .889.

As leaky as the Flames’ defense has been in their last six games, their offense has been productive, recording 27 goals in those six games (4.50 per game).  Johnny Gaudreau leads the Flames in goals (6) and points (13) over that six-game span. In fact, he leads the league in points over that span. Gaudreau might be one of the most prolific fourth round draft picks in the recent history of the league.  He certainly has been since he played his first NHL game in the 2013-2014 season.  Since then, no fourth round draft pick has more points than does Gaudreau (233).  And despite being a fourth-round pick in 2011,m he is sixth in his draft class in points and tied for eighth in goals (82, with Philadelphia’s Sean Couturier).  He brings a nine-game points streak into this contest (7-10-17, plus-5).  What he does not have against the Caps in his career is a goal.  He is 0-5-5, minus-1, in seven career games against Washington.

T.J. Brodie has not had a goal of his own in this six-game offensive explosion for the Flames, but he has spread things around enough to lead the defense in points in that span (0-5-5).  Brodie has been one of those below-the-radar players who suffer perhaps, reputation-wise, from playing out west for a franchise with modest success in recent years.  As it is, since he became a full-time player with the Flames in 2012-2013, he is in the top-30 in points among defensemen (27th, ranked between Ryan McDonagh and Justin Faulk).  Another example of a successful fourth-round draft pick for the Flames (114th overall in 2008).  Brodie is 0-4-4, minus-2, in nine career games against the Caps. 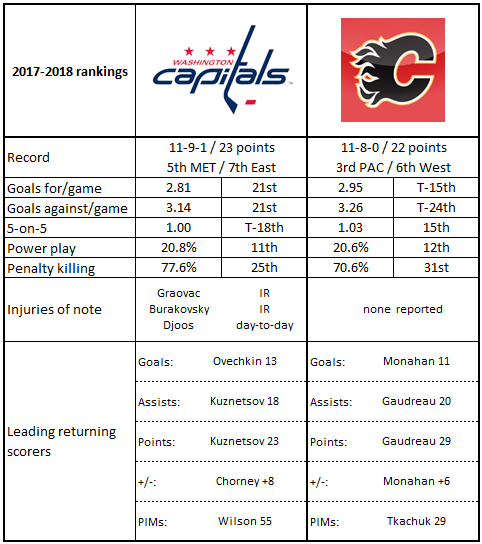 1.  Only twice in 19 games have the Flames taken a lead into the first intermission, fewest in the league.  They won both games.

3.  If Calgary holds the Caps without a power play goal, chances are they will win.  The Flames are 6-1-0 in games this season when they shut out an opponent on their power play.

5.  Calgary is one of three teams without a loss in extra time this season (Toronto and San Jose are the others).  The Flames are 5-0-0 in extra time decisions.

1.  The Caps are similar to the Flames in one respect, their threshold for wins by goals scored.  Washington is 7-0-0 when scoring four or more goals, 4-9-1 when scoring fewer than four goals.

2.  Stay out of the box would be a good rule to live by.  The Caps are 9-4-0 when facing four or fewer shorthanded situations, 2-5-1 when facing five or more such situations.

3.  Only Calgary and Pittsburgh have allowed more power play goals this season (20 apiece) than the Caps (19).

4.  The Caps have nine losses this season when allowing the game’s first goal, tied with Edmonton for most in the league.  Part of the problem there is allowing the first goal 14 times in 21 games.

5.  The Caps are tied for third in the league in one-goal wins (6) but tied for third-worst in losses by three or more goals (5).

The former Capital is struggling to put puck in the net these days.  In fact, struggling might be too weak a term.  In 19 games, having recorded 32 shots on goal, Brouwer has yet to find the back of the net.  He has been a player of diminishing returns in terms of goal scoring in recent years.  Since posting a career-best 25 goals with the Caps in 82 games of the 2013-2014 season, his goal totals have been 21, 18, and 13, before his current year struggles.  It has started to affect his ice time.  When he skated 15:11 in Calgary’s last contest, a 5-4 overtime win over Philadelphia on Saturday, it was the first time he logged more than 13 minutes in seven games.  Three of the four instances in which Brouwer recorded fewer than 12 minutes this season have come in November.  In seven career games against the Caps, Brouwer is 1-0-1, minus-4.

No defenseman in the league has more points or power play points than does John Carlson in November (through Saturday’s games).  Carlson is the only defenseman in the league with ten points for the month (2-8-10), and his six power play points (1-5-6) tops the league as well.  He is one of four defensemen this month to record an overtime goal.  Overall, he ranks second in the league in ice time per game (27:00), and the heavy workload does not seem to bother him, at least in terms of the team’s wins and losses.  In 13 games in which he skated more than 27 minutes, the Caps are 9-4-0, and he is 2-8-10.  The odd part of his production is that he has points in six of the eight games in which he skated less than 27 minutes (0-7-7), but the Caps are just 2-5-1 in those games.  Carlson has an odd statistical quirk in his career splits.  He is a plus-55 in 397 career games against teams in the Eastern Conference, but he is a minus-4 in 150 career games against teams in the West.  He is 0-2-2, minus-2, in 12 career games against the Flames.

In the previous meeting of these teams this season, the Caps were frustrated into scoring just one goal in what was the last of their three-game road trip through western Canada and a loss in what is a frustrating season for backup goalie Philipp Grubauer.  The skate is on the other foot for this game, the Flames coming to Washington for the third of six-game road trip and third of four straight against Eastern Conference opponents.

Meanwhile the Caps are looking to extend their five-game home winning streak using basic ingredients – defense and goaltending.  Over their five-game streak they have held opponents to a total of eight goals, the last three to a single goal apiece.  It sounds like a recipe for success.