The Peerless Prognosticator is ON THE AIR!!! -- Game 14: Capitals at Bruins, November 4th

The Washington Capitals, who have played eight of their first 13 games this season on the road, head back out on that road on Saturday night when they visit TD Garden in Boston to face the Bruins in a battle of teams tied in standings points (13) in the Eastern Conference.

Washington has been a better than .500 team on the road so far with a 4-3-1 record, but they have persistently alternated wins and losses through their eight road contests so far. Given that the Caps lost their last road game, a 2-1 loss in Calgary to the Flames, Caps fans might be hopeful for a continuation of the trend, at least through Saturday.

Boston is coming off a 2-1 win on home ice over the Vegas Golden Knights on Thursday. That win is part of the Bruins’ own odd pattern of alternating wins and losses on home ice since they beat the Nashville Predators at TD Garden on Opening Night. Given the win on Thursday, one might thing it one more element pointing to a Caps win.

If Boston is going to snap the pattern and win a second straight home game, they might need more balanced scoring than they are getting. Of the 32 goals scored by the Bruins in 11 games so far, 14 of them have been scored by the duo of Brad Marchand (eight) and David Pastrnak (six). Marchand is really one of the underrated goal scorers of recent years. Since the 2013-2014 season he is in the top ten in goals scored (133), more than Corey Perry (131), Phil Kessel (115), Jeff Carter (111), James Neal (111), and Rick Nash (108), among other notables. Five of his eight goals this season have been scored on TD Garden ice, although the Bruins are just 2-0-2 in the four games in which he recorded those goals. Marchand scored his 200th career goal in the Bruins’ 4-3 Gimmick loss in Columbus to the Blue Jackets on October 30th. He is 7-7-14, minus-6 (the worst career plus-minus he has against any team), in 23 career games against the Caps.

Pastrnak, on the other hand, is continuing a rather impressive early-career arc in terms of goal scoring. He had 10 goals in 46 games of his 2014-2015 rookie season, and then he followed it up with 15 goals in 51 games the following season. Last year, he jumped to 34 goals in 75 games. That performance led, after some off-season tension, to a six-year/$40 million contract. With six goals in 11 games this season, Pastrnak is on a pace for 45 goals this season, although one wonders if his 19.4 percent shooting percentage (a career high to date) is sustainable. He has hit a dry spell, going without a goal in each of his last four games. He did have a three-assist performance in that 4-3 trick shot loss to Columbus on October 30th, though. In six career games against the Caps, Pastrnak is 1-3-4, minus-4.

If there is a bit of a surprise for the Bruins, it might be hometown native defenseman Charlie McAvoy. Born in Boston, drafted by the Bruins 14th overall in 2016 out of Boston University, he got his baptism under fire in last spring’s postseason, going 0-3-3, minus-2, in six games against the Ottawa Senators. This season, the rookie leads Bruin defensemen in points (1-7-8) and is third among rookie defensemen in the league overall, trailing only Tampa Bay’s Mikhail Sergachev (4-7-11) and New Jersey’s Will Butcher (0-11-11). He had a four-game points streak over the October 14-21 period, but he has just one assist in his last four games, and he does not have a goal since he recorded his lone goal of the season on Opening Night in the Bruins’ 4-3 win over Nashville. This will be his first career appearance against the Caps. 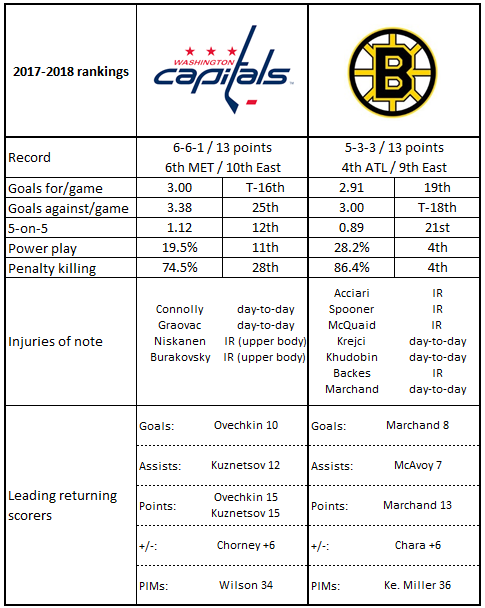 1.  If the Capitals are having issues shooting the puck (and they are), Boston is in the same predicament. The Bruins rank 28th in the league in shots on goal per game (29.3), although they do show signs of improvement, averaging 31.2 shots over their last six games.

2.  The Bruins do not work or play well with others. Their 13:32 in penalty minutes per game is third in the league (through Thursday’s games), and they are tied with the Dallas Stars with seven major penalties (seven fighting majors tops the league).

3.  Giveaways and takeaways are in the eye of the beholder, but the beholders have the Bruins among just eight teams in the league with a positive takeaway-to-giveaway ratio (1.34-to-1).

4.  Boston might be in a transition of sorts. They have already dressed seven rookies this season, four of them – forwards Anders Bjork, Sean Kuraly, and Jake DeBrusk; an defenseman Charlie McAvoy – playing in all 11 games so far. Five rookies (that group of four plus Danton Heinen) have contributed nine of the team’s 32 goals so far.

5.  Whether it is injuries or rotation, the Bruins have gone through a lot of skaters so far. There have been 27 skaters dressing for Boston through 11 games. They had 30 skaters dress over 82 games last season.

1.  The Capitals have been docked for 10 or more penalty minutes in nine games so far. Only Nashville (10) and Chicago (11) have topped ten minutes more often. Only twice in 13 games have the Caps been charged with fewer penalty minutes than their opponent. They had four the Maple Leafs’ six in a 2-0 loss to Toronto, and they had six the Islanders’ eight in the 4-3 win over New York on Thursday night.

2.  Whatever the Caps are doing with their power play on the road, they need to bottle it and bring it back to Capital One Arena. The anemic 5.3 percent home power play (30th of 31 teams) stands in stark contrast to the 31.8 percent road power play (fourth in the league). But wherever they deploy it, they need to do it more often. They are tied with New Jersey for the ninth-fewest power play chances overall (41), and despite their road-heavy schedule rank only tied for 15th in road power play opportunities (22).

4.  The Caps scored first against the Islanders and won. Not surprising. Washington is 3-0-1 when they scored first in games this season, 3-6-0 when they allowed the first goal.

5.  The Caps need to do a much better job of dictating play and putting teams away when they are ahead. Letting the Islanders tie the game in the third period is just one example of the failure to do that this season. Here’s another – the Caps are last in the league in shot attempts-for percentage at 5-on-5 when leading (38.14), the only team under 40 percent in that situation in the league.

Tuukka Rask occupies an interesting place in the history of Boston Bruins goaltending. He is fourth on the franchise’s all-time list in wins (206). Each of the three goalies ahead of him – Tiny Thompson (252 wins), Frank Brimsek (230), and Gerry Cheevers (229) – are in the Hockey Hall of Fame.   It is not too much to think that he will be second on this list well before season’s end (he averaged 35 wins per season over the last four years). And since he came into the league in 2007-2008, Rask is the only goaltender playing at least 5,000 total minutes with a goals against average under 2.30 (2.25), a save percentage over .920 (.922) and at least 30 shutouts (38). Yet, he has been a Vezina Trophy finalist as the league’s best goalie only once, winning the trophy in 2013-2014.

Evgeny Kuznetsov has not been a fast starter when it comes to goal scoring.  Last season he scored his first goal in Game 4, but he then went nine games without one.  He had just two goals in his first 18 games.  The previous season he went without a goal in his first six games before recording a hat trick against the Edmonton Oilers.  The year before that he had one goal in his first 20 games.  There seems to be a pattern.  He went his first nine games without a goal to start this season before getting three in two games against Vancouver and Edmonton on the western Canada trip.  That all three of those goals came on the road should not be considered unusual.  Of his 56 career goals, 32 of them were scored on the road, only 24 in Washington.

The Caps could indulge a slow start from Kuznetsov in the goal scoring department over the past few years, given the Caps’ depth in scoring.  This season, as the number one or the number 1-A center, depending on how you see Nicklas Backstrom’s role, his setting up Alex Ovechkin for scoring chances is important, but with fewer goal-scoring options up and down the roster, they can’t come at the expense of converting the chances that come his way to light the lamp.  Kuznetsov is 3-8-10, plus-8, in 10 career games against the Bruins.

This game presents an interesting opportunity for the Capitals. The contest against the Bruins represents the last game in which has been a difficult early season schedule for the Caps. It is their 14th game, nine of them coming on the road. And, if you look at the teams they have faced, they played Tampa Bay (an overtime loss to the league’s top team in the standings), New Jersey (a win against the fourth-place team league-wide), Pittsburgh (sixth), Ottawa (a win against the seventh-place team), and Toronto (tenth). Five of their 13 games to date have been against some of the best in the league. Now, they have a chance to escape this part of the schedule with a record over .500 with a win against the Bruins. All other things equal, there are worse places to be (Glendale, Arizona comes to mind, or if you’re looking at preseason contenders, Edmonton).

After this game, the Caps will be home for eight of their remaining 12 games in November. But to get to that oasis in the early season schedule, they will have to beat a team that they might be battling all season for a playoff spot. Getting a win on their ice would give the Caps an advantage in that long battle.