The Peerless Prognosticator is ON THE AIR!!! -- Game 51: Capitals at Penguins, February 2nd

The Washington Capitals have 50 games under their belts in the 2017-2018 season with 30 wins to show for it.  They will add to the former and look to add to the latter when they visit Pittsburgh to take on the Penguins in a Friday night “Metro Matchup” of some significance.

Washington will go into Pittsburgh with a six-point lead in the Metropolitan Division and two games in hand on the Penguins.  But they will do so against a team that is 9-3-0 in the 2018 portion of their schedule and playing the sort of hockey that propelled them to consecutive Stanley Cup championships over the past two seasons.

When the 2017 portion of the season ended, the Penguins were mired in seventh place in the eight-team Metropolitan Division.  Since then, their 9-3-0 record is best in the league, their power play (33.3 percent) is best in the league, only the San Jose Sharks (47 in 14 games) have more goals than the Penguins (45), and they have the fourth-best shot attempts-for percentage (53.16 percent; numbers from NHL.com).

“Explosive” would be the word to describe the Penguins on offense in the new year.  They have 11 different instances so far of a player recording three or more points in a game, none with more than Evgeni Malkin, who has four such games in the new year and leads the team with 12 goals in 12 games in 2018.  Malkin also happens to have 12 penalty minutes in those 12 games, adding to his sense of symmetry.  Malkin is moving up the rankings of Russian-born players in NHL history and is within sight of reaching another rung on that ladder.  Should he record a hat trick (heaven forbid), he would pass Vyacheslav Kozlov (356) for seventh place on the all-time list of Russian-born goal scorers.  If all three goals were to come on power plays, he would pass Alex Kovalev (133) for fifth place among Russian-born players in career power play goals scored.  Three power play points, and he would pass Alexander Mogilny (349) in career power-play points).  His chances of doing it?  Well, he has been a productive performer against the Caps, going 16-36-52, minus-1, in 38 career games against Washington.

The odd part about the scoring from the defense in the 2018 portion of the schedule is its balance.  Each of the seven defensemen to have dressed have points, but none have more than four in the 12 games played to date.  Three defensemen share that total, perhaps the most surprising being Jamie Oleksiak (2-2-4, plus-3).  Oleksiak came to the Penguins in a mid-December trade from the Dallas Stars for a conditional fourth-round pick in the 2019 draft.  He is among the biggest defensemen in the league at 6’7”/255 pounds, something of an anachronism in today’s smaller, speedier NHL.  He has struggled to find a permanent place in the league, never having dressed for more than half of his team’s games in any of his six NHL seasons (he dressed for 41 games last year with Dallas).  Although this season will be split between two teams, he does seem to be a certainty to set a personal record for games played, having dressed for 38 games with Dallas (21) and Pittsburgh (17).  Oleksiak has had limited exposure to the Caps, going without a point and plus-1 in three career games against Washington. 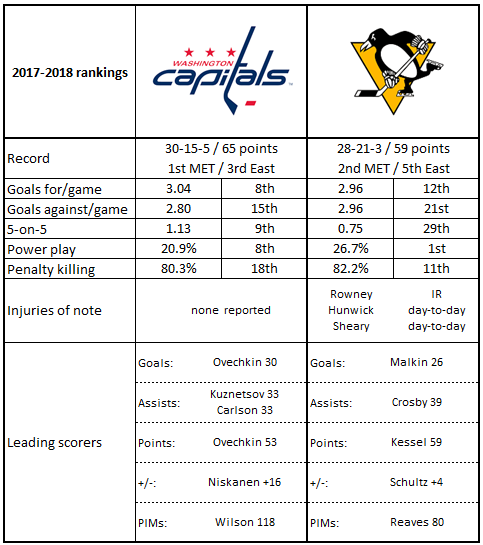 1.  In their nine wins since the calendar turned over, the Pens have wins of three or more goals in six of them.

2.  Pittsburgh has two or more power play goals in 13 games this season.  Five of them have come since the beginning of the new year.

3.  When the Penguins allowed two power play goals to San Jose in a 5-2 win over the Sharks on Tuesday, it broke a 28-game streak in which they did not allow an opponent multiple power play goals in a game (77-for-84 penalty killing/91.7 percent).

4.  Only the Florida Panthers have more instance this season with 40 or more shots on goal (14) than the Penguins (11).  The funny thing is, Pittsburgh has unremarkable success in those games (6-4-1).  On the other hand, allowing high shot volumes seems to matter a bit.  In eight games in which the Penguins allowed more than 35 shots, they are just 3-5-0.

1.  Washington has compiled 274 minutes in penalties in road games this season.  That is fourth-highest in the league.  Forth of those minutes are from misconduct penalties, the Caps’ four infractions topped only by the Nashville Predators. With six of those on the road.

2.  The Caps might need to step up their road game performance.  Through Wednesday night’s games, their 11-8-4 record was ranked 16th in the league.

3.  Washington has recorded 640 shots on goal in road games this season, last in the league.  They also have a shot differential in road contests of minus-127, or 5.5 shots per game.

4.  The Caps are the only team in the league with fewer than 300 blocked shots in road games this season (289).  The New York Rangers and Detroit Red Wings have the next fewest (311).

No player in his draft class (2006) has appeared in more games or has more goals than Phil Kessel (884 games, 317 goals).  He is second overall in points (708).  And this is a draft class that includes Jonathan Toews, Jordan Staal, Nicklas Backstrom, Claude Giroux, and Brad Marchand.  Since he came into the league, only Alex Ovechkin has more goals scored per game in the postseason (0.47) than Kessel (0.44) among players appearing in at least 50 playoff contests.  And, there are the two Stanley Cups.  He has done rather well for himself.  This year, the word to best describe him might be “consistent.”  Only twice this season has Kessel gone as many as two straight games without a point, and he has points in 38 of the 52 games for which he has dressed, those 38 games with points recorded tied for most overall in the league with Tampa Bay’s Nikita Kucherov.  Of particular concern for the Caps in this game is that he has been much more productive at home (14-22-36, plus-2, in 26 home games) than he has on the road (7-16-23, minus-10, in 26 road games), and he has been held off the score sheet entirely only four times in 26 home games this season (all of them, it turns out, losses).  If the Caps can get a lead and make head coach Mike Sullivan give him more minutes, that might be a good thing.  Pittsburgh is just 4-9-1 in 14 games this season in which Kessel logged more than 20 minutes of ice time.  In 41 career games against the Caps, Kessel is 9-18-27, minus-7.

Alex Ovechkin has led the league in power play goals, outright or tied with others, in each of the last five seasons coming into this one.  This year he is tied for fourth, and the slip in rankings, if it is that, might be a product of his power play production on the road.  He is without a power play strike over his last ten road games, not since he recorded one as part of a hat trick in a 4-2 win over the Maple Leafs in Toronto back on November 25th.  It is one of just three power play goals scored by Ovechkin on the road so far this season and the only one he has in his last 18 road contests.  This might be an opportunity for Ovechkin to get back on track on the road, since the Penguins are something of a middle-of-the-road penalty killing group at home, just 81.6 percent for the season (16th overall) and allowing three power play goals on ten chances in their last two home games.  In 50 career games against the Penguins, Ovechkin is 31-22-53, plus-13, 15 of those goals coming on power plays.

No meeting of the Capitals and Penguins is “just another game.”  However, being too aware of the rivalry, and the attendant pomp and attention devoted to it can overwhelm early in games.  Balance that against the somnambulistic style employed by the Caps against the Philadelphia Flyers on Wednesday night when they fell behind, 2-0, and one hopes the Caps can find a middle path – focused, but not manic; calm, but not sluggish.  This will, however, be quite a challenge for the Caps, facing a team that has been steamrolling opponents for the most part since the first of the year.

The Penguins’ recent record aside, a good bet here would be a close game.  In the Ovechkin/Crosby era, the teams have played 24 regular season games in Pittsburgh.  Half of them were one-goal decisions, half of those settled in extra time, the Caps with a 4-4-4 record in those 12 one-goal games.  After Friday night, make that “5-4-4.”