Even now, with a championship on his resume, there is a nagging tendency to take Nicklas Backstrom for granted or lose him in the lineup of great players of the last decade.  Maybe it’s the goal scoring.  True, coming into this season Backstrom was wedged between Alexandre Burrows and Bryan Little in the rankings since the 2007-2008 season, when Backstrom came into the league.  But only Joe Thornton and Henrik Sedin had more assists over the same period, and Backstrom was second on the list in assists per game (to Sidney Crosby) and was eighth in points per game (minimum: 400 games).

What it comes down to, though, is the style.  Backstrom might not have a parallel in bending the pace of a game to his liking.  In that respect, Coach Hayes’ quote about paralyzing resistance with persistence is fitting.  Throw in “consistent,” and you have Backstrom.  In 2017, Backstrom:


Drill down into his season, though, and there were dents in that armor of consistency.  His goal scoring was reasonably consistent across the eight segments, only once finishing with fewer than two goals and once with more than three.  But his assist totals thinned out in the middle portion of the season. He had 20 assists over his first three ten-game segments, but he had only 16 over his next four.  He closed with a rush, though, going 6-20-26 in his last two ten-game segments.  Seems he got a bit more ornery over the same segments, too.  He had almost half of his 46 penalty minutes (22) in those last two segments. 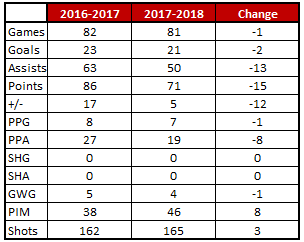 Cheerless’ Take… It would be fair to say that Backstrom is now the second-line center.  No sin in that, but after spending the better part of his first decade in the league centering Alex Ovechkin, that job was Evgeny Kuznetsov’s this season.  It might have played a role in Backstrom finishing with his lowest points per game (0.88) since his rookie season (0.84). Yes, he had those 50 assists for the eighth time in his career, but it was his second-lowest total for any season in which he appeared in more than 50 games (47 in 77 games in 2010-2011), and it was his lowest career assists per game (0.62) of any of his 11 seasons.

Odd Backstrom Fact… In 2017-2018 Nicklas Backstrom scored 21 goals.  He scored those 21 goals in 21 different games, making this the first full season in his career he did not have a multi-goal game (excluding the abbreviated 2012-2013 season in which he had eight goals in eight different games on the 48-game schedule).

When the Caps visited the Columbus Blue Jackets in early February, they held a three-point lead over the New Jersey Devils at the top of the Metropolitan Division.  However, they were in the midst of a slump of sorts, losers of two straight and with a 3-4-2 over their previous nine games.  The teams traded first period goals, and Tom Wilson scored in the second to give the Caps a lead going into the last 20 minutes.  The Caps were playing a somewhat desperate team, though.  The Blue Jackets went into this game tied with the New York Islanders for fourth place in the division and only three points ahead of the last-place New York Rangers.  They drew even late in the period when Brandon Dubinsky batted in a rebound of his own shot with just 6:05 left in regulation.  The teams might have gone to extra time, but with less than a minute left, this happened…

It was Nicklas Backstrom’s 200th career goal and his first game-winning goal scored on the road in the 2017-2018 season.  He became just the fifth player in Caps’ history to score 200 goals with the club, joining Alex Ovechkin, Peter Bondra, Mike Gartner, and Mike Ridley.  With an assist earlier in the game, it was also his 207th career multi-point game, putting him one behind Bondra for second-most in Caps history.  He added nine more multi-point games over the rest of the season to take second place all to himself.

The Caps were closing out a three-game home stand in early January against the Carolina Hurricanes, bringing a five-game winning streak into the contest.  It was the second time that the Caps would face the ‘Canes in barely a week and part of a stretch in which they would face Carolina three times in five games. The first game in this trifecta was a tough one, the Caps winning a 5-4 decision on an overtime goal by Alex Ovechkin.  This game was proving to be as closely fought.  The teams went to the first intermission scoreless.  The scoreless tie was broken mid-way through the second period when, on a Caps power play, Jordan Staal intercepted a weak cross-ice pass from John Carlson intended for Alex Ovechkin and scored on a breakaway shorthanded.  Lars Eller tied the game for the Caps late in the period, but Carolina regained the lead mid-way through the third on a goal by Victor Rask.  Sebastien Aho added an empty net goal for the final 3-1 margin.  As for Backstrom, he was on ice for all three Carolina goals and did not have a shot attempt in the contest.  The odd part of it is that it was the 11th time in his career Backstrom did not register a shot on goal against Carolina, second-most by a Capital against that team since he entered the league (Jeff Schultz: 17).

Postseason…  Until this postseason, Nicklas Backstrom had never missed a postseason game to injury.  The only one of 97 playoff games for the Caps that he missed before this season was due to his receiving a one-game suspension for a cross-check he administered to Rich Peverley of the Boston Bruins at the end of Game 3 of their 2012 series.   Then, he was in the lineup for the Caps’ first 11 postseason games this year.  In that 11th game, though, Backstrom was helping kill a Pittsburgh Penguin power play when he blocked a shot off the stick of Justin Schultz, and while he did play after that, he did so in distress and sat out the last 13 minutes in a 6-3 Caps win.   To that point, Backstrom was 3-10-13 in scoring, a points total only exceeded in an entire playoff season once in his career (2009, when he had 15 points in 14 games).

Backstrom missed the Caps’ next four games, the series-clinching win against the Penguins in Pittsburgh and then the first three games of the conference final against Tampa Bay.  That four-game absence might have been longer but for the fact that after clinching the series win against the Penguins and winning Games 1 and 2 in Tampa against the Lightning in the conference final, the Caps lost Game 3 on home ice.  He returned for Games 4 and 5, both Caps losses that put Washington on the brink of elimination.  Backstrom raised his game in Game 6, recording a pair of assists in a 3-0 win.  It was the first of what would be a superb run for Backstrom, who went 2-8-10 in the Caps’ last seven playoff games, six of them wins.  Only once in that stretch did Backstrom not record a point, that being in Game 3 against Vegas in the final.  He finished the postseason 5-18-23 in 20 games, his 18 assists equaling the total he posted in his previous 40 playoff games before this season.  Those 18 assists are also the second-highest total by a Capital in the postseason in team history (Evgeny Kuznetsov had 20 in these playoffs).

It is a foregone conclusion at this point that Alex Ovechkin will be inducted into the Hockey Hall of Fame.  It should be one regarding Nicklas Backstrom as well.  In 11 NHL seasons he has 590 assists, 59 assists per 82 games played.  If he plays another six seasons, he could well top 900 assists for his career.  At the moment, 19 players in NHL history complied 900 or more assists in their careers.  Of that group, 17 are already in the Hall of Fame, and Joe Thornton and Jaromir Jagr would appear locks.  Even of the 31 players with 800 or more assists, 27 are in the Hall, three are active (and likely to be inducted), leaving only Pierre Turgeon (last season: 2006-2007) as Hall-eligible who has not been inducted.

This is the position into which 11 years of excellence has placed Backstrom.  He is on a very short list of best playmakers of his time and might be eclipsed only by Ovechkin as the greatest Capital of all time.  His 2017-2018 season was a tribute to his consistency and resolve.  He overcame a bit of unfamiliarity with new linemates and then injury in the postseason, a pair of fractures to his finger being the sort of injury that could cripple a lesser player who depends on deft passing as the core of his game.  In one respect – the absence of fireworks in his game – his 2017-2018 season was like any other, but while he might paralyze opponents with pesistence, those in Capitals Nation who have watched his game over the past 11 seasons know that a fire lurks under that quiet demeanor.