Washington Capitals: Luck is What You Make of It 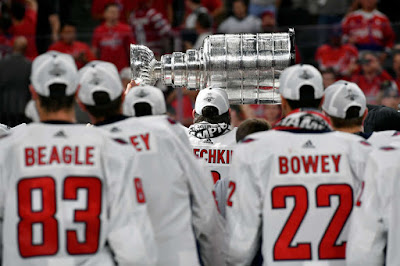 The difference between winning and losing, success and failure, joy and despair might be thinner in hockey than in any other team sport.  The Washington Capitals and their fans could testify to the veracity of that statement.  For years – decades – Capitals Nation always seemed to be on the dark side of that margin.  It could hardly be helped if many in the Nation asked themselves over the years in frustration, “what if?”  As in...

It seemed that whenever there was a critical, game-changing, series-turning moment, it always changed or turned in the opponent’s favor.  But oh, how that script was flipped in 2018…

After losing Games 1 and 2 on home ice, both in overtime, to the Columbus Blue Jackets, the Caps could have gone down, 0-3, when they went to a second overtime in Game 3, but this happened…

How many times did that puck change direction after Brett Connolly took the original shot?

And it only started there...

The poet John Milton once said, “luck is the residue of design.”  The Capitals put themselves in a position to win games, clinch series, and capture the Stanley Cup by virtue of clever design and artful execution of a game plan.  But hockey being what it is, a certain randomness – luck, if you will – will present itself from time to time.  And after decades of seeing those lucky bounces swing the opponent’s way, the Caps put themselves in a position to reap the benefits of luck shining on their side of the ice.  They earned their good fortune.