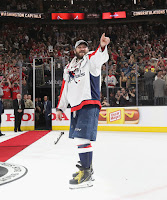 It took 1,003 regular season games and another 121 playoff games, but watching Alex Ovechkin win, and then accept the Stanley Cup from Commissioner Gary Bettman and roar with joy was worth, to Washington Capitals fans, every one of the 23,610 minutes Ovechkin has skated in a Capitals jersey...

In a sense, we are past what happens in the regular season with respect to Ovechkin’s performance.  He has been a constant in that arena for more than a decade, and until it happens, there would be no expectation of decline.  Ovechkin has to be Ovechkin when it counts, as he was last spring.  And he was even more “Ovechkin” in that regard than the Ovechkin on display in recent memory.  His 14 goals in 24 games led the league, and it was the first time since 2011 that he averaged more than half a goal per postseason game (five in nine games).  He set a career postseason best in assists (12).  His plus-8 was the second-best of his postseason career.  His 15.2 percent shooting efficiency was the best of his postseason career.  And he did it averaging only 20:44 per game; only three times did he average less ice time in a postseason.  Think of it as “Ovechkin Concentrate.”

Alex Ovechkin has 229 career power play goals.  This number alone would place him among the top 50 active players in goals scored, currently tied with Tyler Seguin for 46th place.

Lost in all the goal scoring Alex Ovechkin has done over the years is his ability to post points.  With 49 points this season he will jump over Bobby Hull into the top-50 all time in points.  A 58-point season, and he will jump over fellow Russian Sergei Fedorov to become the most prolific point-getter born in Russia in NHL history.  No player in the post 2004-2005 dark season era has more points (1,122, six more than Sidney Crosby).  Only Crosby and Evgeni Malkin have more seasons over that span averaging at least one point per game (13 and 11 seasons, respectively) than Ovechkin (10), and Ovechkin’s number is twice as many as the next full-time winger (Marion Gaborik, Ilya Kovalchuk, and Martin St. Louis, each with five).  Over 13 seasons, the Caps have 3,091 goals scored.  Ovechkin, with 1,122 points, had a hand in more than 36 percent of them.

He didn’t get a hat trick in his last game to hit 50 goals; he had only two.  There were seven teams in the league against which he didn’t score a goal (only one in the East…the Islanders – go figure).  He didn’t score a goal in the Pacific time zone.  He was a plus-player in only one month (plus-10 in December).  Okay, we’re reaching.

The Big Question… How far can Alex Ovechkin climb in the all-time goal scoring rankings?

Before last season began, we were resigned to Alex Ovechkin retiring as the greatest player never to win a Stanley Cup.  We are thrilled to have been wrong.  But he has more time to add to a body of work – more Cups, more awards, more goals.  It is the last that we wonder about.  Someday, Ovechkin will start to decline, to release the grip he has on the title of “top goal scorer in the NHL.”  In the meantime, he continues to climb the all-time goal scoring rankings. He began last season in 26th place with 558 goals.  He ended the season in 19th place with 607 goals.

Given that he has never scored fewer than 32 goals in a season, 30 goals might be a good place to start pegging where he might finish the 2018-2019 season in those all-time rankings.  A season with 30 goals would vault him into 15th place, jumping over Dino Ciccarelli (608), Bobby Hull (610), Joe Sakic (625), and Jarome Iginla (625).  A 40-goal season would put him in 14th place, leap-frogging Dave Andreychuk (640).  And, a 50-goal season would leave Ovechkin in 13th place, jumping over Brendan Shanahan (656).  Of those six players, only Hull is currently less than a full season’s worth of career games played (1,063) ahead of Ovechkin (1,003).  Ovechkin would have to play without a stick not to pass Hull before that difference narrows appreciably.

Now, how likely is it that Ovechkin will max out on his ladder climbing this season?  Since his age-26 season, when he finished a second straight full season with fewer than 40 goals and was thought to be on the verge of decline, he has averaged 48.8 goals per 82 games in six seasons.  Do you want to bet against him?

There is a purveyor snack foods that for decades has used the hook, “bet you can’t eat just one”…

Well, now we get to see if there is an answer to “bet you can’t stop at one (Stanley Cup)” with respect to the Washington Capitals.  And in this pursuit, just like last year’s successful result and the unhappy ones that preceded it, Alex Ovechkin will be the centerpiece in the effort.  Keep in mind that since 2005-2006, none of the 20 instances of a 50-goal season was accompanied by the winning of a Stanley Cup by those players.  So, don’t think it necessary, or even perhaps desirable, that Ovechkin add to his total of 50-goal seasons.

The postseason, should the Caps make it, is another matter.  Ovechkin is tied for 27th among active players in postseason games played (121), but he is fifth in goals scored (61) and first in goals per game among the 175 active players having appeared in at least 50 postseason games (0.504).  In the 2018 postseason he played 24 games, almost a quarter of his total career playoff games played to that date (97); scored 15 goals, almost a third of his total career playoff goals to that date (46); and he recorded 27 points, 30 percent of his playoff point total for his career to that date (90).  That is the sustained level of performance through four rounds upon which a Conn Smythe Trophy for most valuable player in the postseason and, more important, a Stanley Cup is achieved.  But after 13 seasons and having finally reached the summit, he and his teammates have more hills to climb, a Cup at the summit of each.