The Peerless Prognosticator is ON THE AIR!!! -- Game 1: The Banner Raising, Bruins at Capitals, October 3rd

"About 250 days from now, National Hockey League Commissioner Gary Bettman will stand at center ice in one of the league’s 31 arenas and present the captain of the league champion with the Stanley Cup.  The one wish that all of Capitals Nation shares is that wherever that might be, the captain to whom that Cup is presented represents the Washington Capitals."

And so he did.  On June 7, 2018, Commissioner Gary Bettman stood in T-Mobile Arena in Las Vegas and presented the Stanley Cup to the Captain of the Washington Capitals.

The days with the Cup are memories, the rings have been presented to the players, and the last bit of business concerning the 2017-2018 season – the raising of the Stanley Cup banner to the rafters of Capital One Arena will take place in a ceremony on Wednesday night preceding the season opener against the Boston Bruins.

And then the puck will drop to herald the Season of Defense of the Stanley Cup.  The Bruins are an interesting opponent with which to open the season.  Their season following a Stanley Cup victory in 2011 serves as a lesson and a warning.  Boston had their banner night spoiled by the Philadelphia Flyers to open the 2011-2012 season, and then they stumbled to a 3-7-0 record in their first ten games.

Perhaps it was being a prideful bunch, perhaps it was just one of those things, but the Bruins then went on a tear, winning ten in a row, earning points in 15 straight games (14-0-1), and eventually posting a record of 29-7-2 over a 38-game stretch after their ten-game start before they would lose consecutive games again.  But it was clearly a case of peaking too early.  The Bruins faltered late, going just 14-11-2 in their last 27 games before bowing out to the Capitals in seven games of the opening round of the 2012 playoffs.

Avoiding a poor start, not peaking too early, playing with a measure of consistency over the course of the season.  These will be things to watch for as the Capitals set forth in defense of their Stanley Cup championship.

They will do it against a team that won 50 games last season, the tenth time in Bruins history that they hit the 50-win mark.  They did not come by their wins by accident.  They were one of only four teams last season to finish in the top-ten in scoring offense (3.26 goals per game/sixth) and scoring defense (2.57/fourth).  Vegas Nashville, and Winnipeg were the others.  They were the only team to finish in the top-five in both power play (23.5 percent/fourth) and penalty kill (83.7 percent/third).  They held opponents to 29.3 shots per game (second in the league), and they had the second-best shot attempts-for percentage at 5-on-5 (53.71; source: NHL.com).

Boston had three 30-goal scorers last season.  Only Toronto had as many.  All three return for the Bruins.  David Pastrnak led the club with 35 goals, his second consecutive season topping the 30-goal mark. He finished the 2017-2018 season strong, posting 12 goals in his last 17 games.  Brad Marchand posted a third straight season with more than 30 goals, joining Alex Ovechkin and Vladimir Tarasenko as the only players in the league with more than 30 goals in each of their last three seasons.  Since Marchand came into the league in 2009-2010, he is one of four players in the league to record at least 225 goals (226) and at least 500 penalty minutes (578).  Corey Perry (275 goals/761 PIMs), Evgeni Malkin (255/575), and Jamie Benn (254/504) are the others.

On defense, Zdeno Chara returns for a 21st season, his 13th with the Bruins.  He enters the season his sweater number (“33”rd) in all-time regular season games played (1,423).  No active defenseman is within 300 games of him (Jay Bouwmeester has 1,106).  For what it is worth, he and Marc Edouard Vlasic are the only defensemen in the league over the last ten years to have appeared in at least 50 games nine times and not had a “minus” season (not including the abbreviated 2012-2013 season). 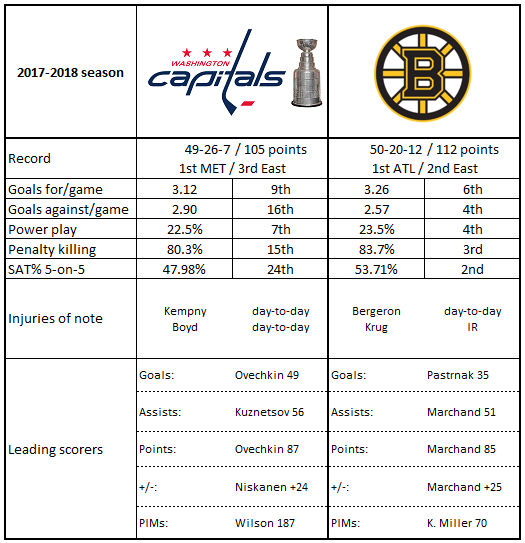 2.  Except for his rookie season and the 2007-2008 season in which he played in only ten games, Bergeron has received votes for the Lady Byng Trophy (gentlemanly play) in each of his other 12 seasons in the league.  He has never won it.

3.  Tuukka Rask and Jaroslav Halak each have exactly 449 appearances in goal in the NHL.  Rask has done it only as a member of the Bruins.  Boston is Halak’s fifth NHL club.

4.  If David Krejci gets four assists in the opener, he will reach the 400 assist mark in his career.  Four helpers, and David Backes will have 300.  If either of these guys gets four assists, it’s probably not a good night for the Caps.

5.  If the Caps are hoping to get a boost from their power play in the opener, good luck.  Boston allowed only 21 power play goals on the road last season.  Only Edmonton allowed fewer (17).

1.  The Capitals had 15 different players record game-winning goals out of a total of 46 last season.  Evgeny Kuznetsov led the club with eight.

2.  Tom Wilson had 187 penalty minutes last season, a career high.  That was almost as many penalty minutes as the next four Capitals combined.  Brooks Orpik (68), Kuznetsov (48), Nicklas Backstrom (46), and Devante Smith-Pelly (38) combined for 200 penalty minutes.

4.  The Capitals had the worst shot attempts-for percentage of any Eastern Conference playoff team in last year’s regular season (47.98 percent/12th of 16 teams).

5.  The last time a goalie other than Braden Holtby or Philipp Grubauer appeared in a Capitals game was March 28, 2015.  Justin Peters relieved Braden Holtby, who allowed three goals on 13 shots in 14:47.  Peters stopped 13 of 14 shots and earned the decision in 4-3 loss to the Nashville Predators.  Fans hope the streak continues a bit longer before Pheonix Copley gets his first action with the club.

Of all the returning Bruins, only David Pastrnak appeared in more games (82) than did center Danton Heinen last season (77).  He gets far less press than Pastrnak or Brad Marchand or Patrice Bergeron or Zdeno Chara, but he was effective in a comparatively anonymous role.  Heinen tied for fifth in goals (16, with Jake DeBrusk), finished fifth in assists (31), fifth in points (47), and did it while averaging only 15:01 in ice time a night (seventh among forwards appearing in at least 40 games).  He was part of a large rookie skater class for the Bruins, five of whom dressed for more than 60 games and eleven getting a sweater at least once last season.  Heinen was one of five Bruins rookies with two power play goals, and his 12 power play points led all Boston rookies.  He is 0-4-4, minus-1, in three career games against the Caps coming into this season.

It figures that on a night of pomp and pageantry, as the Stanley Cup championship banner is raised to the Capital One Arena rafters, Nicklas Backstrom will be in quiet pursuit of a personal milestone.  His first point this season will give him 800 in his career, making him the 12th player active on Opening Night (should he do it) to reach the 800-point mark in his career.  And it is not just at the offensive end in which he has shined.  Except for the 2011-2012 season, when he missed 40 games to a concussion, and the 2013-2014 season, Backstrom has won votes for the Selke Trophy (to defensive forward) in each of his other nine seasons in the NHL (highest finish: seventh in 2016-2017).

And there are other milestones on Backstrom's to-do list.  Should he get the game-winning goal in this contest, it would be his 34th career game-winner, breaking a tie with Bengt Gustafsson for fourth place on the franchise list.  Sometime in mid-season, he would likely catch and pass Mike Ridley for fourth place all-time on the Caps’ goal scoring list (he needs ten to pass Ridley).  With 27 points he will pass Peter Bondra for second on the all-time franchise list.  And, he is already the team’s all-time leader in plus-minus, his plus-118 being two points better than Rod Langway.  Backstrom is 7-29-36, plus-13, in 34 career games against Boston.

Opening Night is, in a way, the end of the 2017-2018 season.  It is a celebration unlike any other this franchise has had, and this being their time at this sort of thing, unlike any they will ever have in the future, even if that future holds more championships.  There will be time enough to scrutinize Todd Reirden’s personnel decisions, this or that player’s effort, whether Braden Holtby allowed a “soft” goal.  This night is not really that time.  But it is the last page of the last chapter of that special season.  When that page is turned and the book closed, it will be time to get down to the real business of defending the Cup.

But for heaven’s sake…enjoy this night.

That is the best blog for anyone who wants to seek out out about this topic. You understand a lot its almost hard to argue with you (not that I truly would need…HaHa). You definitely put a new spin on a topic thats been written about for years. Great stuff, simply nice! online casinos