The annual rite of October for the Washington Capitals, the trip to western Canada, is in the books.  Week 4 was a successful one on balance, but not without its fits and starts.  A lot like the Caps’ season so far. 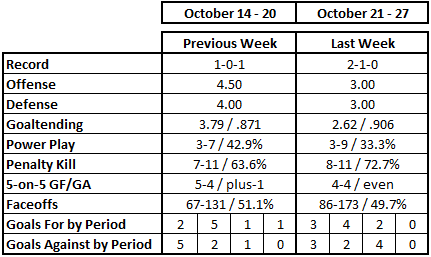 Washington came into Week 4 not having won consecutive games this season.  They ended it in the same condition, beginning and ending the week with wins in Vancouver and Calgary against the Canucks and the Flames with a loss to the Edmonton Oilers in the middle.  It was an improvement over last season’s trip west, where the Caps went 1-2-0.  Over the past six seasons that featured the October trip to western Canada, the Caps are now 10-8-0 against these three teams.  Throw in a couple of visits to Winnipeg as part of the trip (2013 and 2016), both of which resulted in Caps wins, and Washington is 12-8-0 in western Canada over the last six seasons.

The offense came down a notch in Week 4, but averaging more than four goals a game isn’t a sustainable scoring rate in today’s NHL.  Still, the nine goals the Caps did score were spread around liberally.  Seven different skaters hit the back of the net, Alex Ovechkin and T.J. Oshie each scoring a pair.  There were 12 skaters recording points for the week, Ovechkin leading the club with five.

The point spread for the week left the Caps with five players in double digits for the season in points (Evgeny Kuznetsov (15), Ovechkin (14), John Carlson (14), Nicklas Backstrom (13), and Oshie (10).  Only the Toronto Maple Leafs have that many through four weeks.  Carlson finished the week tied with Toronto’s Morgan Rielly in points by defensemen (14) and tied with Dallas’ John Klingberg in goals by defensemen (five).

The Caps did a decent job of suppressing shots in Week 4, holding the trio of opponents to 86 shots on goal, only 71 of those at even strength.  It is part of a broader encouraging sign in this area.  With the Caps holding the three opponents of Week 4 to 32 or fewer shots (Edmonton recorded that number), the Caps have allowed more than 35 shots only twice this season through ten games.  Only five teams have had fewer games with more than 35 shots allowed than the Caps.

The Caps dressed 19 skaters in Week 4, and 14 of them were even or better in shot attempts-for on ice for the week.  Only Devante Smith-Pelly finished lower than minus-6 (minus-13).  Smith-Pelly and Nic Dowd were the only two Caps to finish in minus territory in tied situations (minus-1 and minus-2, respectively.  Overall, the Caps’ 55.56 shot attempts-for percentage was seventh-best in the league for the week.

The goaltending struggled over the first three weeks of the season, but there were signs in Week 4 that things are improving.  Braden Holtby got the call in the first two games of the week and allowed five goals on 55 shots (.909 save percentage).  Not a great week by any means, especially by his standards, but coming into this week he had a .881 save percentage and was pulled after 20 minutes in his last appearance before this week in a 6-5 Gimmick loss to the Florida Panthers.  Holtby’s even strength save percentage (.956) was superb, eighth best among goalies who appeared in two or more games in Week 4.  He still has work to do, his season even strength save percentage of .913 ranking in the lower half of the league, but Week 4 got him pointed in the right direction.

Pheonix Copley got the other start in Week 4 and recorded his first NHL win in the Caps’ 4-3 trick shot win in Calgary over the Flames.  It was Copley’s second straight trip to the freestyle competition, and he turned things around smartly.  After allowing three goals on four tries against the Panthers in the 6-5 Gimmick loss, Copley turned away three of four attempts by Calgary in garnering his first NHL win.  Going the maximum isn’t a bad way to get one’s first win.

It says something about the Caps’ power play that it could score once in every three tries for a week and drop in efficiency.  That was the week for the Caps, going 3-for-9 but retaining their hold on the top spot in the league’s power play rankings.  The number one unit of Ovechkin, Backstrom, Kuznetsov, Carlson, and Oshie all put points on the board, Ovechkin being the lone player with a hand in all three power play goals (one goal, two assists). 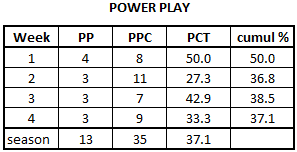 The Caps failed in three tries coming into this week to reach 80.0 percent for the week in penalty killing.  They ended Week 4 looking for that first 80 percent week.  The alarming thing about it is that after shutting out the Boston Bruins and the Vegas Golden Knights in the first three games of the season, the Caps have allowed at least one power play goal in seven straight games.  That they are 3-3-1 in those seven games is not likely to be mere coincidence.

The Caps ran into a pair of teams – Edmonton and Calgary – with efficient power plays on home ice (they ranked eighth and ninth, respectively, in home ice power play at the end of Week 4), but Vancouver didn’t have a power play goal on home ice until they scored against the Caps.

It was an up and down week in the circle for the Caps.  Oddly enough (or a demonstration of the limited effect faceoffs have), the Caps won the two games in which they were under 50 percent and lost the game in which they topped 50 percent. 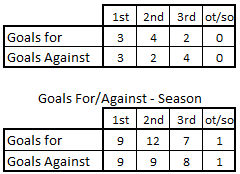 It was more or less an even week for the Caps on a period by period basis.  They held opponents to a draw in the first period, three goals apiece, while flipping a four goal/two goal result in the second and third periods with their opponents’  two goal/four goal results for the second and third periods.  What they did not do was score in the first period against Edmonton, while the Oilers did post one.  Getting off on the wrong foot was something from which the Caps could not recover in what was a lackluster effort overall. 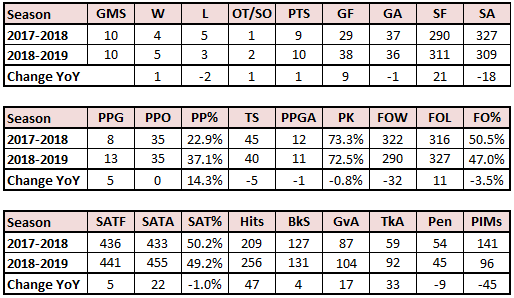 The Caps are ahead of last season’s wins and points pace, and they are scoring at a more frequent pace.  What is telling in the early going is a 39-shot swing in shot differential, from minus-37 through ten games last season to plus-2 so far this season.  The offensive improvement is largely a product of a scorching power play that is more than 50 percent more efficient this year so far than last.  Unfortunately, that improvement in efficiency has not extended to the penalty kill, which is roughly as inefficient this season as it was at the same point last year.  The possession numbers are roughly unchanged on a year-to-year basis.  The “grittership” numbers are generally better, this year over last, but that giveaway number reflects the inconsistent start the Caps have had.

A 2-1-0 record out of the western provinces trip has to be considered a successful result.  However, how they got there is no cause for complacency.  There was an iffy effort in Edmonton followed up by a game in which the Caps gave up a third-period lead late in regulation before pulling out the win in the Gimmick.  The Caps will have some time to address those things that need addressing, since they do not take the ice again until Thursday in Montreal in what will be a light week of game workload.