The Peerless Prognosticator is ON THE AIR!!! -- Game 20: Capitals at Canadiens, November 19th

The Washington Capitals kick off Thanksgiving Week with a visit to Bell Centre to take on the Montreal Canadiens to wrap up their four-game road trip.  The Caps are looking to make it a successful trip, having taken two of three of the games so far.  They will also be looking to win consecutive games for only the second time this season and the first time doing so on the road.

Since the Canadiens defeated the Caps, 6-4, on this same ice sheet on the first of the month, they are 4-3-1.  It is something of an odd record.  All four wins were of the one-goal variety, one (against the New York Islanders on November 5th) coming in the Gimmick.  On the other hand, all three losses in regulation were multi-goal decisions, two of them by three or more goals.  As a result, despite the over-.500 record in standings points over those games, the Habs were outscored, 32-25 over the eight games.

Max Domi leads Montreal in overall scoring over eight games since facing the Caps (4-8-12), and he has two of the Canadiens three power play goals in that span.  It is merely an extension of what has been a fine start for the four-year veteran (10-14-24, plus three power play goals in 20 games).  His 10 goals, 14 assists, and 24 points lead the team in all categories (tied with Jeff Petry in assists).  Through Saturday’s games, he is one of 18 players in the league who has appeared in at least ten games and is averaging 1.20 points per game or more, and he is one of 20 players in the league with six or more multi-point games.  With the season not quite at the one-quarter point for the Canadiens, Domi is already more than half-way to his career high in goals (18 as a rookie with the Arizona Coyotes in 2015-2016) and almost half way to his career high in points (52 in that same rookie season).  He has already tied his career best in power play goals (three as a rookie).  Domi is 1-4-5, plus-5, in seven career games against the Caps.

What the Canadiens have not had in this eight-game stretch since facing the Caps is goal scoring contributions from defensemen.  Noah Juulsen is the only Canadien blueliner with a goal over that span of games, that being the game-tying goal in the third period of the Canadiens’ 4-3 trick shot win over the Islanders on November 5th.  Juulsen is representative of the Montreal blue line in that he’s been nicked up.  He missed two games in late October to injury and was held out of two others in early November.  As it is, Montreal has had only two defensemen dress for all 20 games so far this season.  For his own record, Juulsen seems a lock to dress for more games than he did last year in his first season with Montreal (23 games).  He already has as many goals as last season (one) and set career bests in assists and points (four and five, respectively).  Juulsen is without a point in two career games against Washington and is a minus-2.

Montreal’s goaltenders have struggled over this 4-3-1 stretch.  Carey Price and Antti Niemi have more or less split the time, Price getting five starts and Niemi three, neither having much positive effect.  Price is 2-2-1, 3.80, .896 in his five appearances.  On the plus side, he has been better more recently.  After dropping the first three of his decisions over this span (0-2-1) and stopping only 84 of 99 shots (.848 save percentage), he was the winner in his most recent two appearances (on the road against Calgary and Vancouver), stopping 79 of 83 shots (.952 save percentage).  He was over .900 in save percentage in both games, breaking a streak of five appearances in which he was under that bar.
On the other hand, Niemi has been the beneficiary of solid offensive support.  He won two of his three decisions, but he was under .900 in save percentage in all three games, stopping a total of 79 of 92 shots faced (.876 save percentage).  In six appearances so far this season, Niemi has been over .900 in save percentage just once, stopping 38 of 42 shots (.905), in a 4-3 loss to the Buffalo Sabres on October 25th.  Price is 7-13-4, 3.33, .890, with one shutout in 24 career appearances against the Caps, while Niemi is 6-0-3, 2.46, .913, with one shutout in nine career appearances against Washington. 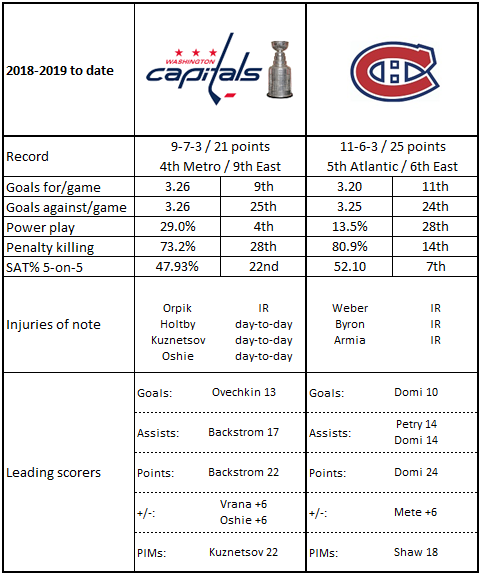 2.  The Canadiens have the third-worst power play on home ice this season (12.2 percent).  They are 0-for-17 over their last five home games.

3.  In ten home games to date, Montreal had a negative shot attempt differential at 5-on-5 in only one of them, going minus-14 against Detroit in a 7-3 win on October 15th.

2.  The Caps have allowed at least one power play goal in seven of nine road games to date and have a record of 3-3-1 in those games.  In the two games in which they did not allow a power play goal, they are 1-1-0.

When Montreal traded Max Pacioretty to the Vegas Golden Knights for Tomas Tatar and Nick Suzuki last September 9th, few would have thought that the early winner of that trade would have been the Canadiens, at least as far as the raw numbers are concerned.  Pacioretty has struggled with two goals and four points with a minus-6 in 16 games .  Meanwhile, Tatar is tied for second in Montreal goal scoring (nine, with Brendan Gallagher) and tied for second in points (17) with Jonathan Drouin.  Six of those goals have come in the last six games.  Tatar is well on pace to finish the year with his fifth straight season of 20 or more goals after coming up one short in 2013-2014.  His engagement in the offensive end has been important for the Canadiens.  In six games in which he recorded at least four shots on goal, Montreal is 5-1-0.  They are 6-5-3 in the 14 games in which he had three or fewer shots on goal.  In 15 career games against the Capitals, Tatar is 6-5-11, plus-6.

The Capitals expect to get offensive production out of the likes of Alex Ovechkin, Nicklas Backstrom, or Evgeny Kuznetsov, regardless of venue.  However, Jakub Vrana is tied for fifth-best in road points this season (3-3-6 in nine games), and those three goals are the third-most in road games for the Caps this season.  The odd part of his road production is that while secondary scoring support is generally a good thing, his has not had much of an effect.  The Caps are 1-1-1 in the three road games in which he scored a goal, 3-2-1 in road games in which he recorded a point.  His production on the road is part of a broader oddity in his record, the fact that he has had more offensive production on the road in his brief career to date (11-13-24 in 55 road games) than at home (10-8-18 in 58 home games), even though he has a far higher shot volume at home (119 to 85 shots on goal).  Vrana is 0-2-2, minus-3, in five career games against Montreal.

The Caps are wrapping up their second four-game road trip of the season much as they did their first four-game trip.  In that one, they beat Vancouver, lost to Edmonton, and then they defeated Calgary in extra time (in a shootout) before the visited Montreal to wrap up that trip.  This time around, they beat Minnesota, lost to Winnipeg, and then they beat Colorado in overtime with only the game in Montreal on Monday to complete the trip.  The first time the Caps played this scenario, they lost in a wild 6-4 contest at Bell Centre.  They will be looking to flip the script and make this trip a successful one.