The Peerless Prognosticator is ON THE AIR!!! -- Game 24: Capitals at Islanders, November 26th

The Washington Capitals complete their New York Dads Trip on Monday night when they head to Brooklyn and a contest with the New York Islanders at Barclays Center.  It is a game that has more than the usual importance that a divisional matchup of teams separated by only three points in the standings might have.  It will be the first time that the Caps and Islanders head coach Barry Trotz shared the same ice sheet since the Capitals, under Trotz’ direction, won the Stanley Cup in Las Vegas last June 7th.  It will be the first time the Caps faced Trotz as an opposing coach since Trotz’ Nashville Predators beat the Caps in a Gimmick, 4-3, back on March 30, 2014.

The Islanders have shown themselves to be an inhospitable host, going 6-2-2 in ten home games so far this season.  They have done is largely by being stingy in allowing goals at home.  The 26 goals allowed in ten home games is the sixth-fewest in the league and third-fewest in the Eastern Conference.  What makes the goals allowed total a bit odd is the manner in which goalies have been deployed by Trotz.  The goalie assignments have largely split into the “home” goalie (Thomas Greiss) and the “road” goalie (Robin Lehner), despite the fact that Lehner has better home numbers than Greiss in fewer appearances.

Greiss has eight starts in ten home games, but his 2.64 goals against average and .915 save percentage pale a bit next to his 5-2-1 win-loss record and rank in the middle of the pack among goalies in home performance (22nd in goals against average and 23rd in save percentage among goalies with at least 200 home minutes played).  His performances more recently have been more successful, though.  Seven of his last eight appearances have come at Barclays Center, and in those seven games Greiss has a record of 5-1-1, 2.45, .924, and one shutout.  On the other hand, Lehner has only three appearances on home ice this season and has not started a game at Barclays Center since October 24th, but he does have a 1-0-1, 2.36, .933 record on home ice.  Greiss is 2-1-1, 2.49, .926 in four career appearances against the Caps, while Lehner is 1-3-1, 2.60, .913 in five career games against the Caps.

If you had Anthony Beauvillier as the leading goal-getter on home ice for the Islanders through ten home games this season, go buy a lottery ticket.  There he sits, though, with five goals in ten games.  The 28th overall pick of the 2015 entry draft is in his third season with the Islanders, and last year he posted his first career 20-goal season with 21 scores in 71 games.  Most of his home production so far this season came in a single game, a hat trick and four points in 7-5 win over the New York Rangers on November 15th.  However, that game started a three game home goal streak that he will bring into this contest (5-1-6), the only home games in which he has points this season.  In seven career games against the Caps, Beauvillier is 0-1-1, even.

Another lesser known performer on home ice is Scott Mayfield, who leads all Islander defensemen in goals scored (three) and points (four) on home ice.  Since he was drafted in the second round by the Islanders in the 2011 entry draft, his progress has been slow but steady.  He spent parts of four seasons with the Bridgeport Sound Tigers in the NHL and parts of three getting a glimpse of the NHL before appearing in 47 games with the Isles last year.  It was a season in which he tied a career high in goals (two), and set career highs in assists (ten) and points (12).  This season, he has already set a new career high in goals, the three he has (all at home) being almost as many as the rest of the defense combined (four).  He also has seven assists, closing in on the career best he set last season.  Mayfield does not have a point in three career games against Washington 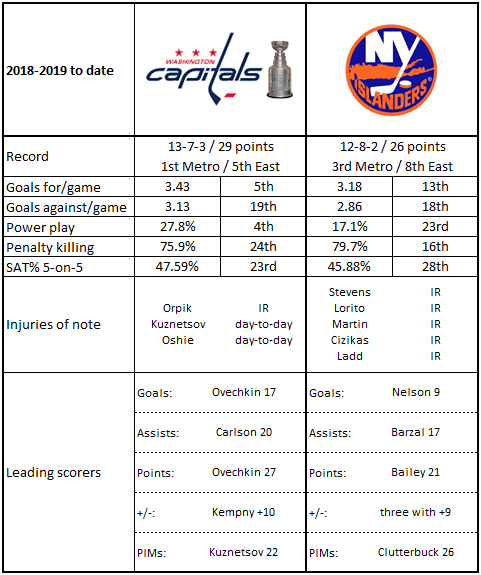 2.  Shorthanded goals do not figure to be a feature of this game.  The Islanders have only one shorthanded goal this season (as do the Caps), while only Vegas and Dallas have fewer (none).

2.  Matt Niskanen is also a minus-6 on the road. The Orlov-Niskanen defensive pair is the only one with minus numbers on the road this season.

3.  The Caps and the Winnipeg Jets are the only teams in the league with four players with ten or more power play points.

In his first 22 games in his rookie season last year, Mathew Barzal was averaging a point a game (6-16-22) on his way to the Calder Trophy as the league’s top rookie.  He almost on that pace through 22 games this season (20 points), but his three-goal total is half of what it was at this point last season.  His contributions do matter to the Islanders, who are 9-5-1 in the 15 games in which he registered a point, 3-3-1 in the seven games in which he was blanked on the score sheet.  The odd part of that split is that Barzal is 4-2-1 in seven home games in which he has at least one point, 2-0-1 in the three games he did not record a point. And, only twice in 10 home games has he been a “plus” player.  It gets even stranger when looking at his shots on goal.  In 12 games in which Barzal recorded at least two shots on goal, the Isles are 5-6-1.  They are 7-2-1 in those games in which he had one or no shots on goal.  His is an odd profile, indeed.  Barzal is 1-3-4, minus-2, in five career games against the Caps.

Braden Holtby has had an interesting and unusual start to the season in goal for the Caps.  Of his 16 appearances so far, 11 of them have been on home ice, where he thrives, going 6-3-1, 2.51, .922 with his only shutout of the season.  On the road, he has struggled to find his footing in a comparatively low number of appearances.  In just five appearances on the road so far, Holtby is 2-2-1, 3.62, .894.  It is not unlike his career home-road split (2.21/.925 at home, 2.68/.913 on the road), but it is more pronounced.  Perhaps the strangest part of Holtby’s road record to start the season is that the only instance in which he had a save percentage over .920 came in a relief role, when he stopped all 22 shots he faced in relief of Pheonix Copley in a 5-4 overtime win over the Montreal Canadiens in his most recent road appearance.  And while he has had a history of success with high shot volumes, that has not been the case on the road.  Three times he faced more than 30 shots on the road so far, and he is looking for his first win in that situation (0-2-1, 5.01, .870).  Holtby is 14-4-3, 2.46, .919 in 21 career appearances against the Islanders.

It is hard to tell from game to game which Islander defense will show up on home ice.  It is a team that has held opponents under two goals three times in ten games with two shutouts.  On the other hand, they allowed opponents four or more goals three times, including two of their last three games at Barclays Center.  On the other side, the Caps have five goals scored in three of their last five road games and five or more in five of their 11 road games this season.  Even with the absences of Evgeny Kuznetsov and T.J. Oshie, the Caps are a formidable offensive team that is enjoying perhaps its best stretch of the season.