The Peerless Prognosticator is ON THE AIR!!! -- Game 42: Flyers at Capitals, January 8th

It has been a few weeks since the Washington Capitals hosted a good old rivalry game, but that is what is on tap for Tuesday night when the Philadelphia Flyers come to town.  It is the first meeting of the season between clubs that are at opposite poles of the NHL spectrum these days.  The Caps are defending Stanley Cup champions, three-time defending champion of the Metropolitan Division, leaders of the division once more, and even with just having snapped a three-game losing streak (0-2-1), their longest losing streak of the season, are 17-5-1 over their last 23 games.

On the other hand, the Flyers have not won a postseason series since 2012, have appeared in the playoffs only three times over the last six seasons, and, if their current position is any indicator (last place in the Metropolitan Division), will miss the postseason for a second consecutive season, the first time that will have happened since the club missed the playoffs over five straight years from 1990 through 1994.

The Flyers are, at the moment, a mess.  Ron Hextall, who served as general manager of the club from May 2014, was relieved of his duties last November, replaced by Chuck Fletcher.  Head coach Dave Hakstol, who was hired to the position in May 2015, was relieved of his duties in December after a 12-15-4 start.  Scott Gordon, who had a 64-94-23 record over two-plus seasons as head coach of the New York Islanders from 2008 to 2010, was hired to replace him.  He has not fared much better, going 3-5-2 since taking over.

Has anyone shined since the change behind the bench?  Not really.  Three players lead the club in scoring under Gordon in the ten games played so far.  Winger James van Riemsdyk is one of those players, leading the club in goals over the last ten games and is 3-4-7.  Van Riemsdyk, who was a second-overall draft pick for the Flyers in 2007, is in his second tour with the club, signing a five-year/$35 million contract last July after spending six seasons with the Toronto Maple Leafs.  It has been a challenging year for van Riemsdyk, who missed 16 games earlier this season to a lower body injury.  His production in the 25 games in which he has appeared this season are disappointing from a production standpoint.  Last season he recorded a career-high 36 goals with Toronto, but this season has only six goals in those 25 games.  It has been almost a month since he recorded a goal on the road, that coming back on December 12th in a 6-5 overtime loss in Calgary against the Flames.  He is without a goal on the road in his last seven games.  Van Riemsdyk is 7-11-18, minus-7, in 26 career games against the Caps.

Jakub Voracek also has seven points in the Scott Gordon era (2-5-7), although he has only one goal in his last eight games and two in his last 13 games.  What he is on, though, is a pace to finish with 20 goals, and if he does so it would be the third consecutive season in which he had 20 goals with the Flyers.  On the other hand, he is also on a pace to finish the season a minus-34.  His minus-17 at the moment is fourth-worst among 525 forwards to dress in the NHL this season through Sunday’s games.  Voracek has been reasonably productive on the road lately.  Since December 1st he is 3-6-9, minus-3, in 11 road contests.  He is 13-13-26, plus-8, in 33 career games against Washington.

The third Flyer with seven points in ten games under Scott Gordon is Claude Giroux (2-5-7).  Giroux is one of the few Flyers who have maintained a personal standard of production despite the difficulties surrounding the club on and off the ice.  His goal scoring pace is a bit off of last year when he had a career high 34 goals (he is on a pace to finish with 26), but his assist total of 33 is on a pace to challenge the league-leading 68 assists he compiled last season.  He has taken on more responsibility in one sense in that his 125 shots on goal at the half-way point for the Flyers puts him on a pace to finish with 250 shots on goal, which would be his second-highest career total for a season (279 shots on goal in 2014-2015).  He has been remarkably consistent so far this season, recording 24 points in his first 20 games and 22 points in his last 21 games.  On another consistency dimension, he has 23 points both at home (in 19 games) and on the road (in 22 games) this season.  In 37 career games against the Capitals, Giroux is 18-19-37, plus-5. 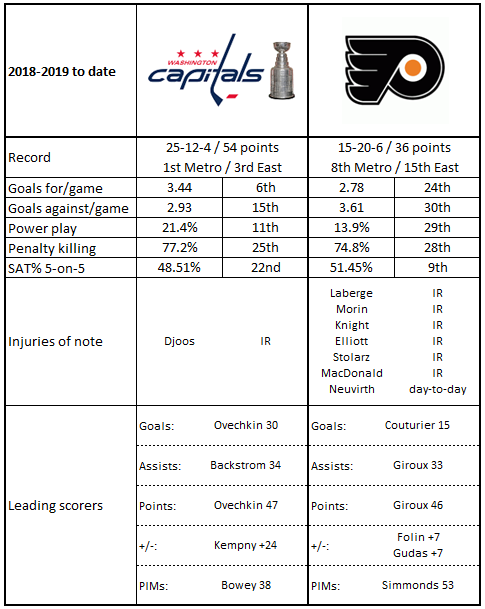 1.  The Flyers had a season-longest three-game winning streak in early November.  They could not handle the good fortune.  Since then, at which point they were at their high-water win-loss mark (9-7-1), they are 6-13-5, the worst record in the league over that span.

3.  Philadelphia’s shooting percentage over their last 6-13-5 skid (7.4 percent) is worst in the league over that span.

4.  For those looking for encouragement for the Caps’ power play, the Flyers are 28th in the league in road penalty killing (73.9 percent).

5.  Things are not any better for Philadelphia on the other side of special teams.  Their 11.5 percent power play on the road is 30th in the league.

1.  Washington’s power play at home, despite recent troubles, remains highly ranked.  At 27.4 percent, they rank third in the league on home ice.  However, they are just 1-for-18 over their last five home games.

2.  Penalty killing at home is something with which they struggled recently as well, going 16-for-22 over their last seven games (72.7 percent).

3.  The Caps have 20 or more blocked shots at home five times this season.  They won each time.

5.  Only the New York Rangers have more wins in the Gimmick (five) than the Caps (three, tied with three other teams).

Bernie Parent was in goal for the first game in Philadelphia Flyers history, stopping 28 of 33 shots in a 5-1 loss to the California Golden Seals on October 11, 1967.  He was the first of 58 goalies to dress for the club over the course of its history.  Six of those goalies have dressed for the club this season.  For the record, that list includes Brian Elliott, Calvin Pickard, Anthony Stolarz, Carter Hart, Michael Neuvirth, and Alex Lyon.  Elliott is the only one to get more than ten starts (13), but he has not appeared in a game since November 15th, a victim of a lower body injury.  He, along with Stolarz (lower body injury), are on injured reserve, and Neuvirth is officially day-to-day with an undisclosed injury.  Carter Hart, widely seen as the eventual number one goalie for the club, has had six starts in the team’s last ten games going into Monday night’s game against St. Louis.  With the Flyers facing the Caps in the back half of a back-to-back set of games, the question is which one will Hart get, and does it mean that the Flyers will dress their seventh goalie this season?

That would be Mike McKenna, claimed on waivers from the Vancouver Canucks two days after the Canucks obtained him in a trade with Ottawa.  McKenna has had an odd history.  Six NHL seasons dating back to 2008-2009, each with a different club (Tampa Bay, New Jersey, Columbus, Arizona, and Dallas, in that order).  He appeared in 15 games for the Lightning as a rookie in 2008-2009, but he has been in only 19 games since, ten of them this season with the Senators.  His 7-16-3, 3.58, .892, one shutout career record probably inspires little confidence in Flyers Nation.  Nor would his 0-4-0, 4.84, .858 career record in four appearances against Washington.

Alex Ovechkin continues to chase records and milestones.  Evgeny Kuznetsov continues to dazzle with his skating and playmaking.  Nicklas Backstrom continues to impress with his vision and anticipation.  Meanwhile, Brett Connolly is building what for him might be a career season.  In 41 games he is 9-15-24, plus-8.  That puts him on a pace to appear in every regular season game for the first time in his career, and to set a career high in goals (18, surpassing the 15 he had in each of the last two seasons with the Caps), assists (30, topping the 16 he had with Boston in 2015-2016), and points (27 set with the Caps last season).  Furthermore, his goal scoring has displayed a certain consistency.  If he records a goal against the Flyers, he would have five goals in 21 games both at home and on the road.  For Connolly, it matters.  He is in the walk year of his current contract that has an average annual value of $1.5 million.  The difference between a 15-goal scorer and a 20-goal scorer at age 27 next season would be considerable in terms of compensation.  Connolly is 3-0-3, plus-1, in 13 career games against the Flyers.

But for the fact that the opponent wears orange and black jerseys, this should be a clear win for the Caps.  But the Flyers were not an especially successful club last season and still took three of four games against the Caps.  The level of turmoil with this club is much greater than last season, but playing the defending Stanley Cup champs will – or should – provide sufficient motivation to focus on the task at hand for the Flyers.

For the Caps, they are entering that long, slow slog of winter games that always seem to run together and bleed (in a manner of speaking) into one another.  But this is the Flyers, and that means a rowdy crowd that should provide the Caps with enough support to take even a struggling Flyers team seriously.  That, and the Flyers coming off a game Monday night, should be more than enough to take the first game in the four-game season series.