The Peerless Prognosticator is ON THE AIR!!! -- Game 50: Capitals at Maple Leafs, January 23rd


Some folks might look at last night’s 7-6 overtime loss to the San Jose Sharks and say, “gee…tough luck,” but the Caps earned their fate, failing to close out a two-goal lead in the third period.  Finishing games weakly has been an issue all season and might be something deserving fans’ attention in Wednesday’s game.  Meanwhile, the Leafs are stumbling into the break, losers of four of their last five games and 3-7-0 since they had a five-game winning streak in late December.  Since that ten-game run started on December 29th, that record is the league’s worst.

Offense is an issue.  The good thing about it is balance.  The Leafs have had 14 different players record goals over the last ten games.  The bad thing?  Ten of them have only one goal in that span.  One of them happens to be Auston Matthews.  Once upon a time this season, Matthews was being talked about as the next great goal scorer.  It was understandable.  He started the season scoring goals in each of his first six games (ten overall).  And even though he was slowed by a shoulder injury that kept him out of the lineup for a month from late October to late November, he had 16 goals in the first 16 games in which he played this season.  Since then, however he has only four goals in 18 games and that lone goal in his last ten contests.  It matters.  In 34 games played this season, Toronto is 11-2-0 when Matthews scores a goal, 9-10-2 in the 22 games he played and did not score a goal.  He has only one goal at home in the last nine games he played at Scotiabank Arena .  Matthews is 2-4-6, plus-1, in six career games against Washington.

Another player whose offense has dried up in this ten-game slide is defenseman Morgan Rielly.  His start to the season mirrored that of Matthews in terms of points.  He had points in each of his first six games this season (3-10-13), and he maintained that frenetic scoring pace well into the season, going 13-31-44 in his first 37 games this season.  Those 44 points led all defensemen by a wide margin going into the Christmas break (Ottawa’s Thomas Chabot had 37 points).  But then, after the break, Rielly suffered a three-game streak without a point, his first pointless streak of that length this season.  He has only four assists on his ledger over his last 11 games and has been shut out in goals on a total of 29 shots over that span.  Rielly is 1-7-8, minus-3, in 16 career games against the Caps.

Frederik Andersen was having a nice start to his season in goal.  In his first 30 appearances, through December 22nd, he was tied for the league lead in wins (20, with Marc-Andre Fleury), eighth in goals against average among 44 goalies with at least 750 minutes (2.50), seventh in save percentage (.923), and had a shutout.  However, December 22nd was the last he would play for a while, sitting out eight games with a groin injury.  He returned to the lineup on January 14th against Colorado, but he has not yet discovered that early season rhythm.  In three appearances since his return he is 1-2-0, 3.04, .913. 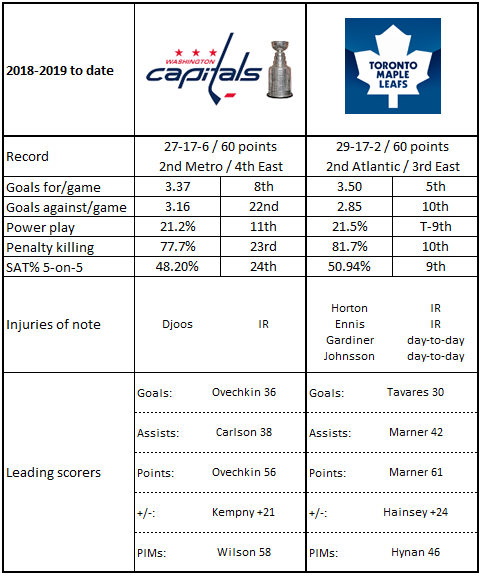 2.  Give the Leafs credit, they are entertaining.  Or not.  In 48 games this season they have played in games settled by margins of three or more goals.  They are 10-9 in those games.

3.  On the other hand, Toronto does not play in very many close games.  Only 11 times in 48 games have they played to a one-goal decision, going 6-3-2.  Only three teams have fewer one-goal wins (St. Louis, New Jersey, and Colorado), and only four have fewer one-goal losses in regulation (Pittsburgh, Anaheim, Carolina, and Tampa Bay).

4.  It is best to score first against Toronto.  Only two teams have more wins than the Maple Leafs (22) when scoring first – Nashville and Calgary have 23 apiece.  They’re .786 winning percentage in such games (22-5-1) is fourth-best in the league.

5.  There is one area in which the Leafs are strong where the Caps have been weak – finishing games strong.  Toronto has a 63-48 goal differential (plus-15) in the third periods and overtimes of games this season.

1.  The Caps have allowed 50 goals over their last 12 games.  That is as many goals as they allowed in the 21 previous games.

2.  Washington has allowed 15 goals in their last two road games.  In their previous eight road contests they allowed only 18 goals and had two shutouts.  But even there, the writing was on the wall.  In two of those games they allowed five goals, which brings us to…

3.  The Caps have allowed five or more goals in five of their last 12 road games.

4.  Four times in their last 12 games, the Caps allowed opponents 40 or more shots.  Only five times have they had 30 or more of their own.

5.  The overtime loss to San Jose was the third straight time that the Caps lost in extra time (all in the overtime period).

Is there any more “under-the-radar” player over the last 20 seasons than Patrick Marleau?  Yes, 20 seasons.  Well, 21 actually.  Marleau, who entered the NHL the same season that the Caps appeared in their first Stanley Cup final (1997-1998) is among the active leaders in:

Almost as amazing is his uncommon durability.  In 21 NHL seasons, Marleau has never missed more than eight games in a single season, and he has appeared in 80 or more games 14 times.  He appeared in every regular season game 11 times, including the abbreviated 48-game season in 2013.  The last time he missed a game was in the 2008-2009 season, when he missed five games to a lower-body injury late in the season.  He brings a 754-game streak into this game, second among active players (Keith Yandle: 763).  However, he, like a lot of his teammates, has been in a scoring slump lately.  The goal and assist he posted in a 4-2 win over Tampa Bay last Thursday are his only points in his last 12 games.  Marleau is 9-14-23, plus-6, in 31 career games against the Capitals.

When a team goes on an extended losing streak, their fans get impatient, and memories are set aside.   Over the course of an 82-game season, a team earns its record, good or bad.  However, there is a difference between being in a slump and being bad.  But between the two there might be a gray area where effort, focus, and attention lie.  And it is here where the Caps are coming up short, characterized by taking shortcuts and displaying lack of commitment to the things that made them successful last season.  Fans might be a bit too quick to call for trading this guy, or sending that guy down to Hershey, bringing that other guy up, or (the go-to-solution for fans) making a coaching change.  But the Caps stand squarely in that gray area at the moment, and they have less than half a season to figure out if they are a good team that was merely in a slump or a team whose expiration date has passed.