The Peerless Prognosticator is ON THE AIR!!! -- Game 59: Capitals at Ducks, February 17th

The Washington Capital continue their road through California on Sunday night when they visit the Anaheim Ducks at Honda Center.  The Caps are coming what might be their best game of the season, a 5-1 thrashing of the San Jose Sharks on Thursday night that broke a four-game losing streak on the road.

Anaheim is celebrating their 25th NHL season.  Well, celebrating might be too kind a word.  Their 22-26-9 record is their worst, by points percentage (.465), since the dark 2004-2005 season.  Dark would be an apt description of their season since mid-December.  Since they dropped a 3-1 decision in New York to the Rangers on December 18th to end a four-game winning streak, the Ducks were shot out of the sky as if they were hit by a shotgun from a duck blind.  They are 3-16-4 since that four-game winning streak, easily the worst record in the league over that stretch.

The Ducks’ biggest problem is that they cannot score.  They have managed only 35 goals in those 23 games (1.52 per game), 18 fewer than the team ranked 30th in goals scored (Dallas).  Only one player among the 34 to dress over those 23 games has more than five goals.  That would be Daniel Sprong, who has six goals over this tortuous stretch.  Sprong was traded to the Ducks on December 3rd from the Pittsburgh Penguins for defenseman Marcus Pettersson.  Sprong, a second round pick of the Penguins in the 2015 entry draft, had an up and down experience with the Penguins.  Injuries and the depth the Penguins had at forward limited him to 42 games over three seasons before he was traded to Anaheim.  He scored a goal in his first game with the Ducks, a 4-2 win over the Chicago Blackhawks on December 5th.  In 29 games overall with the Ducks he is 9-4-13, minus-7.  In three career games against the Caps, Sprong is 0-1-1, minus-1.

Over the Ducks’ 3-16-4 run, they have one goal from among the 11 defensemen to have dressed.  That belongs to Josh Mahura, but he was re-assigned to the San Diego Gulls in the AHL on January 9th.  That doesn’t mean the defense has been entirely devoid of contributions.  Eight defensemen, including the departed Mahura, have points, led by Brandon Montour and Hampus Lindholm, both with five (all assists).

Montour is the only Anaheim defenseman to dress for all 58 games this season.  A second-round pick of the Ducks in 2014, he is in his third NHL season and is displaying some promise as an offensive defenseman, the recent slim production notwithstanding.  After posting two goals and six points in 27 games in intermittent appearances in 2016-2017 stint, he was 9-23-32 in 80 games last season.  While he is likely to finish short of last year’s goal mark (he has five and has not recorded one in his last 25 games), his 19 assists are within four of last year’s mark, and with 24 points he is on a pace to eclipse last year’s point total.  Montour had a particularly productive string of home games in November and December in which he went 4-9-13, plus-10, over eight home games.  Since then, though, Montour has one assist in eight home contests.  In five career games against the Caps, he does not have a point and is plus-2.

When Ryan Getzlaf took the ice last Saturday against the Flyers in Philadelphia, he became the Ducks’ all-time leader in games played (967), passing Teemu Selanne.  It is not the only category in which Getzlaf ranks highly in Ducks history.  He ranks fourth in goals (258), first in assists (653), second in points (911), first in plus-minus (plus-143), tied for second in penalty minutes (812), fourth in power play goals (78), second in power play points (313), tied for fourth in shorthanded goals (eight), third in game-winning goals (50), and first in overtime goals (nine).  This season, his production is a reflection of the troubles the Ducks are having scoring goals.  Consider that last season, his 0.89 assists per game led the league.  This season, his assists per game are barely half of that (0.48).  It has been even worse over this dreadful 23-game run, Getzlaf averaging only 0.26 assists per game.  Compounding that, he is an incredible minus-29 over that span.  If there is a team against which he might return to some measure of productive health, it might be the Caps.  Getzlaf is 7-16-23, plus-5, in 17 career games against Washington. 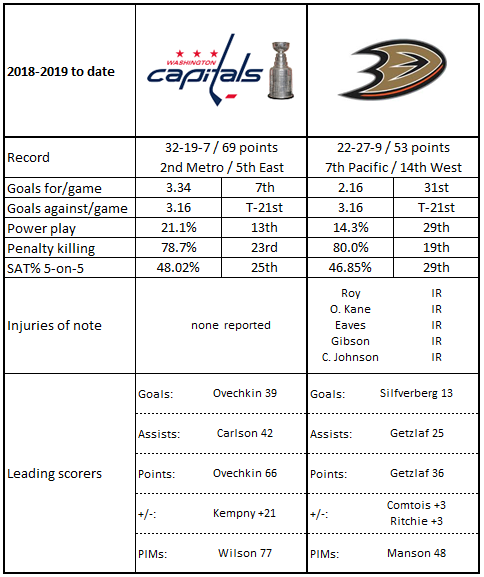 1.  No team has fewer power play goals on home ice this season than the Ducks (eight).

4.  No team in the West has committed more minor penalties than the Ducks (204, tied with Vancouver).

5.  As poorly as the Ducks have played, don’t sleep on them.  Anaheim has six wins this season when trailing after two periods, tied for third-most in the league.  Then again, they get a lot of practice.  They have trailed at the second intermission 29 times this season, tied for tops in the league with New Jersey.

1.  The Caps have spread things out on the road.  So far this season, 20 skaters have scored at least one goal on the road.  Last season, that total was 17 skaters all season on the road.

2.  Of 24 skaters to dress for road games this season, 23 have points.  Only Nathan Walker, who dressed for only one road game, does not have a point.

3.  Evgeny Kuznetsov has been a bad luck shooter on the road.  He has one goal on 58 shots (1.8 percent).  That shooting percentage is 190th of 197 players recording at least 50 shots on the road this season and second-worst among forwards (James Neal is 1-for-60).

4.  The Caps have committed more penalties than any team in the Eastern Conference (231).

It could mean that the Caps get to meet an old adversary in Miller.  Now in his 16th NHL season, Miller is the second oldest goaltender in the league at 38 years old (Roberto Luongo is 39).  Miller is in the last year of a two-year/$4.0 million contract with Anaheim, and his role with the Ducks has been primarily to backstop Gibson.  He has been effective in a limited role, going 16-8-7, 2.45, .926, with four shutouts in 38 games over the past two seasons.  He does have rust on him, though.  He has not dressed for a game since December 9th, when he was injured against the New Jersey Devils, and he has not played in a full game since November 27th when he stopped 34 of 35 shots in a 3-1 win over Tampa Bay.  What might influence the decision here is that in addition to his lack of game experience over the last couple of months, Miller’s record on home ice this season is spotty (1-2-1, 3.31, .915), while Boyle is 1-1-0, 1.01, .968 and that shutout.  Miller is 18-14-0, 2.54, .916, with three shutouts in 33 career appearances against the Capitals.

John Carlson seems to be suffering a bit in his production since the All-Star Game.  In eight games since the break, he is 0-3-3, even, in eight games.  He is not alone in his quiet play, though.  He is one of five defensemen to average at least 25 minutes per game since the break, record at least ten shots on goal, and fail to hit the back of the net.  The others include Ryan Suter, Drew Doughty, and Seth Jones; not a bad squad.  Nevertheless, Carlson is one of four defensemen in the league with 50 points (he is fourth, 8-42-50), and his 22 power play points ranks third among all league defensemen.

Should Carlson light the lamp on Sunday, he will tie Larry Murphy for sixth place on the Caps’ all-time list of goals scored by a defenseman (86).  If he gets two assists, he will become the third defenseman in Caps history to hit the 300-assist mark, joining Scott Stevens (331) and Calle Johansson (361).  Carlson is 2-6-8, minus-2, in 12 career games against the Ducks.

This game has the potential to be a “trap” game of sorts, the temptation to let down after a big win against a tough opponent, compounded by a two-day break between games.  And, the Caps are not a particularly effective team when getting two days off, going 4-3-0 this season when doing so.  Still, they are facing an opponent running out of things to play for, one that finds itself seven points out of a playoff spot and six teams to climb over with 24 games left to play.

Anaheim calls itself the “City of Kindness.”  The Ducks have been kind to visitors, not disturbing their net very much with pesky things like goals.  The Caps are coming off one of their best defensive efforts in memory.  The object here is not to let up and get careless against an opponent who has difficulty mustering offensive pressure, and is in the throes of turmoil with goaltender injuries and a coach who recently took over without having any prior professional coaching experience.