It might be said of Washington Capitals center Lars Eller that he likes certain odd numbers.  There is, of course, the number “1,” as in “number of career Cup-clinching goals,” he being the player who broke a third period tie in Game 5 of the 2018 Stanley Cup final to secure that club’s first and only (to date) Stanley Cup.  But then there is the strange thing Eller has with games played.  Three times in his career he dressed for exactly 77 games (2010-2011, 2013-2014, and 2014-2015). Twice he dressed for exactly 79 games (2011-2012 and 2015-2016).  This year, Eller completed his third consecutive year having played in exactly 81 games.  No player in NHL history has played in precisely that many games in more consecutive seasons.

Eller’s ten-game segments were not quite as consistent, but it was not a roller coaster, either.  He did not post fewer than three points in any segment, but it was a case of starting (11 points in first two segments) and finishing (12 in his las two segments) strong.  His shots on goal followed a reasonably consistent pattern.  There were two areas in which he showed considerable improvement from the season’s start to finish.  Eller was minus-14 through the first five segments of the season, but he finished with a plus-13 over the last three segments.  He logged 25 penalty minutes – about two thirds of his season total – in the first three segments, but he recorded only six penalty minutes in his last three segments. 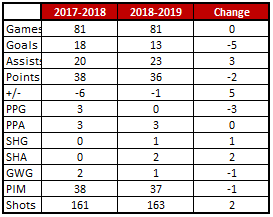 Fearless’ Take… Eller has established himself in only three seasons as one of the most productive centers for the franchise since the 2005-20065 season.  Among players playing primarily the center position (not including such as Marcus Johansson or Brooks Laich, who played a significant amount of time on the wing), Eller is fourth in games played (243), third in goals scored (43, trailing Nicklas Backstrom (231) and Evgeny Kuznetsov (101)), fourth in assists (56), and third in points (99).  One piece that was consistently coming up short for the Caps in their annual postseason disappointments was solid and consistent play out of their depth centers.  Eller has provided that.

Cheerless’ Take… A center does not have to be a big goal scorer, but his overall points contributions can be an important ingredient for success.  Eller appeared in 81 games this season and did not record a point in 54 of them.  That is tied for ninth-most among Capital centers since 2005-2006 (tied for seventh if you think of Brooks Laich more as a winger).  In fact, Eller has two of the top nine (or seven) such seasons in that span.   Given that the Caps were 18-4-5 in the games in which he did record a point, those contributions were important.  In a perverse way, perhaps, it documents his value to the club and what they missed when they did not have a player such as Eller anchoring the third line.

Odd Eller Fact… In his three seasons as a Capital, Eller is plus-25 on home ice (fifth among Capital forwards) and minus-17 (second-worst among forwards) on the road.

When a player logs more than 450 regular and postseason games with a club and moves on to another city, facing his old team is an occasion.  Such was the case for Lars Eller when the Caps visited the Montreal Canadiens in November.  The Caps were struggling with a 9-7-3 start to the season, only once having won consecutive games.  Having beaten the Colorado Avalanche in Denver in their previous outing, the Caps had a chance to win consecutive games for the second time this season and first time on the road.

Montreal broke on top on a Mike Reilly goal 9:20 into the first period, but the Caps took the lead to the locker room at the first intermission on goals by Brett Connolly and Alex Ovechkin.  The Habs scored three times in the first 95 seconds of the second period to take a 4-2 lead to chase goalie Pheonix Copley to the bench in favor of Braden Holtby. Nicklas Backstrom got one back before the end of the second period to make a game of it.

Ovechkin scored 62 seconds into the third period to tie the game, but neither team could break the deadlock thereafter.  The game went to overtime where Montreal had a bit of an advantage early on with three shots in the first three minutes of the extra session.   But the Caps counterpunched with Jakub Vrana skating down the right side with defenseman Michal Kempny in the middle and Eller on the left side.  Pulling up at the top of the right wing circle, Vrana found Eller with a cross ice pass.  Eller stepped up to the top of the left wing circle and wristed a shot between goalie Carey Price’s right arm and his body to give the Caps a come-from-behind 5-4 overtime win.  It was Eller’s only game-winning goal of the season.

The Caps opened their defense of their Stanley Cup championship with a pair of home-road, back-to-back sets of games.  They beat Boston in the Stanley Cup banner raising at Capital One Arena, 7-0, before dropping a 7-6 overtime decision in Pittsburgh the following night.  The Caps then beat Vegas in a rematch of Stanley Cup finalists, 5-2, before heading to New Jersey to face the Devils.  The Caps fell into a 2-0 hole in the first period, allowed a goal in the third minute of the second period, and then the Devils pulled away with three goals in the third period in a 6-0 win.  Eller had as forgettable a game as any Capital.  He skated just 11:52, his lowest ice time of the season in which he skated an entire game (he logged six minutes and change in a February 1st game against Calgary in which he sustained a lower body injury), was on ice for three goals against in posting a minus-3 rating, took a penalty, had three giveaways, won just two of eight faceoffs.

Postseason… It would be hard to top last year’s postseason, Eller being the only player in Caps history to score a Stanley Cup clinching goal.  Still, Eller did have a goal and two assists in seven games.  The odd part of his scoring was that two of the points (both of them assists) came on the road and in what would be losses.  And his goal, scored in Game 1 of the first round series against Carolina, was an empty netter in a 4-2 win.  But what was perhaps the strangest number of all was his on-ice shot attempt percentages at 5-on-5.  In what was generally a difficult series in this category for the Caps, Eller was under 40 percent for the series (39.22 percent).  There were times when Eller looked like the player he was in last year’s postseason, but the instances were not as frequent, something that can be said of the Caps generally.

Eller just completed the first year of a five-year deal that carries a $3.5 million annual cap hit and keeps him in the fold through the 2022-2023 season.  Eller has been an extraordinarily durable player.  In his nine full seasons, he has missed a total of 25 games and never missed more than five in any season.  He posted his second consecutive 35-plus point season in 2018-2019, a first for him.  Given his consistency and durability, it would be reasonable to pencil him in for a mid-teens goal total, mid-30’s point total, and a being a solid lineup fixture.

Lars Eller, the hero of Game 5 of the 2018 Stanley Cup final, author of the game-winning, series-clinching, Cup-seizing goal, has found success as a Capital as a solid, consistent anchor on its third line of forwards.  While he can, and does play on other lines as needs arise, he is one player whose role and performance of it is something to be counted on, game in and game out, giving the club the chance to address other areas not quite as solid or consistent.  It is not the sexiest of roles, but the Caps missed it dearly when there was no one to fill it adequately.  That measure of success is no trifle for this club.