“Courage, above all things, is the first quality of a warrior.”
-- Carl von Clausewitz

When T.J. Oshie finished the season with 25 goals in the 2018-2019 season, it was the third time in four seasons in Washington that he reached the 25-goal mark.  Only eight players in the history of the franchise have done it more times.  It is a quite different experience than Oshie had in seven years with the St. Louis Blues to start his NHL career, over which he only topped 20 goals once (21 in 2013-2014).  Much of it is a product of much greater efficiency.  Over those four seasons, only two players among the 218 with at least 500 shots on goal have a better shooting percentage than Oshie (17.1) – Mark Schiefele (18.0) and Brayden Point (17.2).

Oshie’s efficiency in 2018-2019 was right in line with his numbers over his career as a Capital, his 17.5 percent mark ranking 12th among the 258 players recording at least 125 shots on goal.  He certainly came out of the gate fast, posting nine goals on 40 shots over his first 18 games (22.5 percent).  But then he was slammed to the ice in the late stages of regulation by Winnipeg’s Josh Morrissey (the whistle was never blown, and Oshie was still on the ice when the Jets scored into an empty net to secure a 3-1 win):

Oshie missed 11 games, but the Caps picked up the slack in his absence, going 9-2-0 over that stretch.  He was slow to get back to a more familiar level of production on his return, going just 2-0-2, even, over his first dozen games back in the lineup. At that point, he had perhaps his best run of games all season.  From January 8th through March 1st, a span of 24 games, Oshie went 10-16-26 and had nine multi-point games.  Oddly enough, the Caps were just 12-9-3 over those games.  He did taper off a bit late but still went 4-8-12, plus-2, in his last 15 games. 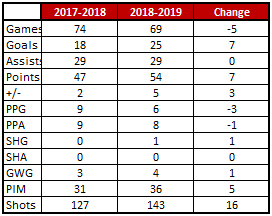 Fearless’ Take… Oshie’s goal scoring was a critical ingredient to the Caps’ success this season.  The team lost only once in regulation when he scored a goal (January 15th in a 7-2 loss in Nashville to the Predators) and went 16-1-3 in the 20 games overall.  It is part of a larger pattern with Oshie.  In his four years with the Caps, they are 68-6-9 in the 83 games in which he scored a goal.

Cheerless’ Take… That T.J. Oshie is one of the toughest sonuvaguns in the NHL is beyond question.  But what that means is that there is the risk of injury.  In four years with the Caps he has missed 37 games and another three in the postseason.  The log from TSN.ca looks like this…

It is hard to find fault with Oshie’s effort or his production.  But having just wrapped up his age 32 season with recording for the second time fewer than 70 games in a season, was this season a glimpse of things to come or just misfortune?

When the Caps headed west to start their three-game California swing in mid-February, T.J. Oshie was in a bit of a goal scoring slump.  In 15 games leading up to that trip, Oshie had 15 points, but only three of them came on goals, and he was a minus-8 in the process.  However, opening the trip in San Jose against the Sharks might have been the break Oshie was looking for.  In 27 career games against the Sharks going into this contest he was 7-8-15, five of those goals having been scored in San Jose.  After the Sharks broke in front just over two minutes into the game, Oshie got the Caps even just over a minute later when he collected the rebound of an Alex Ovechkin shot beneath the goal line to the right of goalie Martin Jones and banked a shot off Jones and in to make it 1-1 3:38 into the period.

The Caps went ahead eight minutes later, Oshie starting the play by skating a loose puck out of the Caps’ end.  Carrying the puck down the right side in front of the players benches, he fed the puck to Nicklas Backstrom skating down the middle.  Backstrom returned the puck to Oshie, who crossed the blue line before feeding it across to Jakub Vrana.  From the high slot, Vrana tried to shovel the puck past Jones, but the shot was blocked in front.  Vrana followed up with the rebound and snapped the puck past Jones at the 11:33 mark to make it 2-1.  Ovechkin added to the Caps’ lead four minutes into the second period, and Oshie put the game away late in the frame.  The Caps broke out of their own end on a long pass from John Carlson to the red line and off the stick of Backstrom.  Vrana chipped the puck ahead to Oshie breaking behind the defense, whereupon Oshie deked Jones and snuck a forehand past Jones’ left pad to make it 4-1 on the way to a 5-1 win.  Oshie’s second goal was his 500th career point in the NHL and was his third of four three-point games for the season, two of them coming against the Sharks.

The trip to Buffalo in late February was one a lot of Caps might like to forget, but for T.J. Oshie is was especially frustrating.  He was on the ice when the Sabres opened the scoring less than four minutes into the game.  He was on the ice when the Sabres scored a power play goal in the last minute of the second period to give Buffalo a 3-1 lead at the second intermission.  And after the Caps closed to within a goal less than five minutes into the third period, he was on the ice for a Sabre goal less than two minutes later that killed whatever momentum the Caps were generating.  Oshie finished the context minus-3, tied with Backstrom for team-worst, and went without a point in 15:20 of ice time.

Postseason…  T.J. Oshie has been an important ingredient in Caps success in the regular season over his four seasons with the club, but he has been a big contributor in the postseason as well.  Through the first three games of the opening round series against Carolina, Oshie was 19-26-45 in 52 postseason games with the club, 1-1-2 in three games to open the series.  In Game 4, with Carolina nursing a 2-1 lead late in the contest, he was pushed by Warren Foegele while in pursuit of a loose puck and fell forward awkwardly into the boards.  He fractured his clavicle on the play, ending his postseason.  Carolina went on to win that game and won Game 6 and 7 in Oshie’s absence to capture the series.

Looking ahead… T.J. Oshie has six years remaining on an eight-year/$46 million contract that will keep him a Capital through the 2024-2025 season when he will be 38 years old.  One might wonder if that contract will age well, given Oshie’s injury history. But even with that history, Oshie is one of only 29 players in franchise history to top 100 goals with the club (tied for 27th place with Marcus Johansson at 102 goals).  With a slightly better than typical Oshie season he could break into the top-20 in all time goal scoring for the club, Alan Haworth currently occupying the 20th spot with 129 goals.  It might be just a matter of keeping him in the lineup.

T.J. Oshie has become a fan favorite for his production, but also his unbridled willingness to go into the hard areas of the ice and do the dirty work that a lot of skill players might be more inclined to avoid.  In his four seasons with the Caps, he is third among the team’s forwards in credited hits (486), trailing only Alex Ovechkin (803) and Tom Wilson (942), players who have at least three inches and at least 20 pounds on Oshie.  It has come at a price, though, and it might have been a high price in the opening round of this season’s playoffs.  It is not too much to imagine that Oshie’s presence would have meant more than his inspirational value cheering on the Caps over the last three game against Carolina.  Everyone hopes Oshie comes back strong and, even more, finishes strong and healthy in 2019-2020.

Santamedical Rechargeable Tens Unit Electronic Pulse Massager is a compact, portable, micro-computer-controlled device. It can be used on many areas of the body, including the arms, neck and shoulders, back, low back, legs, feet, joints etc.