The Washington Capitals continue their first home stand of the season with the New York Islanders coming to town for Tuesday and Thursday games at Capital One Arena.  The Caps enter the contest with points in each of their first six games on the schedule, while the Islanders come to Washington on the second stop of a five-game road trip, losers of their first contest on the trip, a 2-0 blanking at the hands of the New Jersey Devils.

The Islanders rank dead last in the NHL in scoring offense (1.80 goals per game), so it is hardly surprising that only five of 19 skaters to dress for the club so far have posted goals.  Four of those players – Mathew Barzal, Anders Lee, Brock Nelson, and Jordan Eberle – each have a pair, which Jean-Gabriel Pageau has the other.

Conspicuously absent from the list is Anthony Beauvillier, who has a lone assist after five games after posting 18 goals for the Isles last season, his third straight season posting at least 18 goals for the club.  Beauvillier is one of those late first round draft picks who can get lost in the noise of more celebrated members of his draft class, especially given he was the 28th overall pick in the Connor McDavid/Jack Eichel draft of 2015.  Nevertheless, he ranks tenth in his draft class in game played (291), tenth in goals (66), 17th in assists (62), and 14th in points (128).  He did it over his first four NHL seasons with a healthy shots per game average (1.82 per game) and respectable shooting percentage (12.7).  This season, however, Beauvillier recorded an assist in the season opener in a win against the New York Rangers, but he is without a point since, and he has only four shots on goal in three games.  He left Sunday’s game against the New Jersey Devils in the second period with an undisclosed injury after logging only seven minutes of ice time.  Beauvillier, who is 2-6-8, plus-5, in 15 career games against the Caps, is part of the secondary scoring the Islanders have not had and will miss in his absence.

Josh Bailey is another Islander whose output has been disappointing in the early going.  Through five games, Bailey has but one assist, a slow start for a player who comes into this season having posted four consecutive 40-plus point seasons for the Islanders.  His slow start stands in stark contrast to the start he had last season when he went 6-6-12 in his first 14 games.  What might be of some concern for the 13-year veteran is that since he posted a 71-point season in 2017-2018 (18-53-71 in 76 games), his goals, assist, and point totals have dropped in each year since (16-40-56 in 82 games in 2018-2019 and 14-29-42 in 68 games last season).  Bailey is the active leader among Islanders in scoring against the Caps, posting a 5-15-20, minus-14, scoring line against Washington in 48 career games.

It would be hard to think of how a goalie can get off to a hotter start than that Semyon Varlaomov has had to open the season for the Islanders.  He is tied for the league lead in wins (three), ranks first in goals against average (0.33), ranks first in save percentage (.988), and is the only goalie with two shutouts so far.  Part of his success might be facing relatively light workloads (averaging 27 shots faced per game), but it is an impressive start nonetheless.  Since finishing second in Vezina Trophy voting in 2013-2014 on a record of 41-14-6 (league leader in wins), 2.41, .927, with two shutouts with the Colorado Avalanche, Varlamov was up and down with the Avs before signing with the Islanders as a free agent in July 2019. His first season was respectable (19-14-6, 2.62, .914, with two shutouts), but still failed to approach his best performances in Colorado.  He is off to a much better three-game start than last season, however (1-2-0, 3.15, .905), which makes him a key element for the Caps to solve in this contest.  The former first round draft pick of the Caps (23rd overall in 2006) is 4-6-1, 2.74, .924, in 11 career games against Washington. 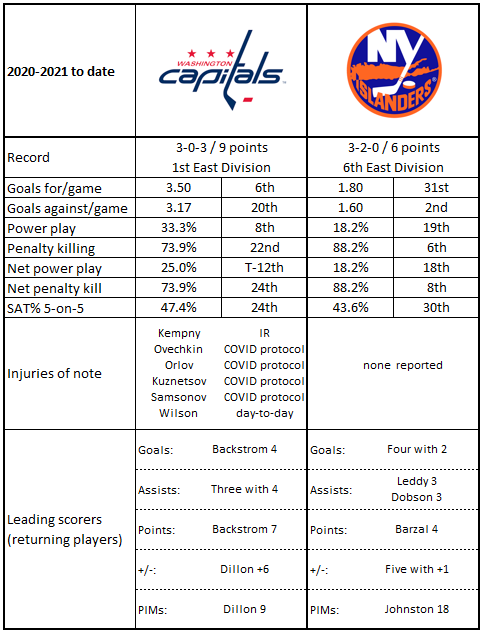 1.  The Islanders are the only team in the NHL currently averaging less than two goals scored per game and two goals allowed per game.  Don’t count on this being how the Islanders finish. The last time it happened was in 1935-1936, when the Boston Bruins, Chicago Blackhawks, and New York Rangers all finished under two goals per game on both sides of the puck.

2.  The Islanders lead the league in faceoff winning percentage (58.0).  Makes one wonder just how many draws the Caps (28th in the league) will win.

3.  The Islanders are one of two teams (Nashville is the other) having played as many as five games with only six 5-on-5 goals allowed.

2.  The Caps lead the league through Sunday’s games in first period goals scored (nine); they have allowed more second period goals (ten) than any team in the Eastern Conference.

4.  Washington is 1-0-3 in games in which they led after one period, their .250 winning percentage ranking 28th in the league.

The New York Islanders have a tradition of fine defensemen – Hall of Famer Denis Potvin, Ken Morrow, Tomas Jonsson, Stefan Persson among them.  Nick Leddy has quietly climbed the ranks of the Islanders defenseman rankings over seven seasons since he was traded to the Islanders from the Chicago Blackhawks in October 2014.  Leddy ranks tenth on the all time list of games played by an Islander defenseman (467) and will likely become the eighth defensemen in team history to suit up for 500 games later this season.  He, like the rest of the Islanders defense corps, has not yet registered a goal this season, and this could be a point of concern for a club lacking in offensive depth.  Leddy posted 36 goals in his first four seasons with the Isles, but had a total of only seven in 142 games in the two seasons preceding this one.  He is tied for the team lead in assists and points among defensemen (three, with Noah Dobson), and he is the only Islander defenseman with a personal shot attempts-for percentage at 5-on-5 over 50 percent (52.9).  But conversely, he is below 50 percent in on-ice goals for percentage (33.3).  His performance, like that of the Islanders generally, has been a mixed bag.  Leddy is 1-7-8, minus-9, in 29 career games against the Capitals.

When the Capitals lost the services of four key players as a result of COVID protocol violations, it would be reasonable to expect that Nicklas Backstrom would have to step up and assume a bigger role than the large role he already plays for the Capitals.  But the thing is, Backstrom has stepped up since the season opener.  He recorded a goal and an assist in the season opening 6-4 win over the Buffalo Sabres, and he has points in five of six games to date.  His four goals leads the club, as do his seven points.  He has half of the team’s power play goal total (two of four) and leads the Caps with three power play points.  What is unusual about Backstrom’s output so far is not just his goal production but that he has not assisted on an Alex Ovechkin goal, while Ovechkin has assists on two Backstrom goals.  Backstrom is off to a hotter goal-scoring start than he was last season, when he did not post his fourth goal of the season until his 18th game of the year.  It took him 16 games in 2018-2019 to get to four goals and 28 games to get to that number in 2017-2018.  A cooling off period might be coming, Backstrom posting a 23.5 shooting percentage through six games, but he has been quite productive in the early going.  He is 11-37-48, plus-13, in 47 career games against the Islanders.

Let us face it, the Islanders are just the kind of team that gives the Capitals fits.  They counterpunch, they play deliberately, their underlying numbers do not impress, but somehow they grind out wins by bending the style of the game to their liking.  With a lot of the Caps’ offense on the shelf for this two-game set, perhaps the Caps will matchup with the Islanders in a way that is less to the Islanders’ liking.