Week 2 was a disappointment for the Washington Capitals on more than one level. They opened the week with consecutive extra time losses to their hate rivals, the Pittsburgh Penguins, before salvaging the week with a Gimmick win over the Buffalo Sabres to complete the week.  And, there was the matter of four players breaking COVID protocols, one of them contracting the virus and two others testing positive for COVID-antibodies, earning all four players a four-game absence for quarantining purposes.  Finally, there was Tom Wilson missing the last third of the week’s final game with a lower-body injury that might keep him out of the lineup for a time.  But the Caps did avoid suffering their first regulation loss for a second week, and in a short season banking those points is gold. 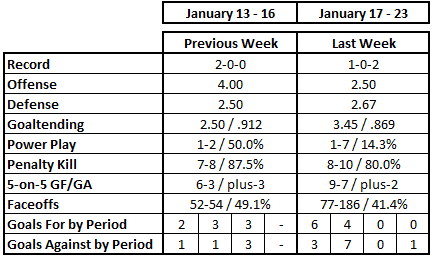 The Caps played three extra time games in Week 2, the first time they went to extra time in three straight contests since Games 12-14 last season when they lost to Edmonton in overtime before winning consecutive games against Vancouver (in a Gimmick) and Toronto (in overtime).  The two consecutive extra time losses to the Penguins to open the week snapped a two-game winning streak the Caps brought into the season against the Pens.

The extra time win over Buffalo to end the week was the Caps’ third win over the Sabres this season and extended their streak of games without a regulation loss to the Sabres to five games (4-0-1) dating back to last season.  The win in what was also the home opener for the Caps extended their fine record in home openers to 16-1-2 in their last 19 games to open the season in Washington.

Ten goals in three games, especially when recorded as consistent a fashion as the Caps did (twice with three goals, once with four) is a solid team performance, especially given that Alex Ovechkin had only one of those goals and missed the last game of the week for violating the league’s COVID protocols.

Seven Caps shared the ten goals for the week with Nicklas Backstrom, Tom Wilson, and Nic Dowd each getting a pair.  Thirteen Caps recorded at least one point for the week, Wilson leading the team with four (2-2-4).  Three other Caps had three apiece – Ovechkin, Evgeny Kuznetsov, and Jakub Vrana, all of them going 1-2-3.

Kuznetsov and Ovechkin led the team in shots on goal with eight apiece, while Conor Sheary was the only one among 21 skaters for the week not to record a shot on goal (in one game played).

The Caps did get points from three defensemen (John Carlson with two, Zdeno Chara, and Brenden Dillon), but all points came on assists, not goals.

In the early going of the Peter Laviolette era, the Caps are a team with defensive issues.  Be they “defense,” broadly construed, goaltending, the new aspects of systems, or a combination of the three, the fact is that the Caps have allowed three or more goals (not including Gimmicks) in four of their first five games, including all three in Week 2.  What it does not appear to be is a product of shots on goal allowed.  The Caps allowed 30 of fewer shots in all three games for the week (all of them settled in extra time), and in four straight after allowing 31 shots in the season opener.  They allowed more than ten shots on goal in three of nine full periods of hockey.

What appeared to be a problem for the Caps was yielding shot attempts in close game situations.  Overall, their shot attempts-for percentage at 5-on-5 for the week was unimpressive (48.1), but it was worse in tied game situations (45.6).  The odd part of this statistical area was that the Caps did well in terms of shooting plus save percentage at fives (102.9).  Defense is, to date, very much an unsettled matter for the club.

While the defense seems to have issues through which it needs to work, goaltending for the Capitals has to be better.  Five games in, and four instances of a goaltender finishing his work with a save percentage under .900.  Vitek Vanacek was the exception, posting a .968 save percentage in his NHL debut in Week 1.  In Week 2, Ilya Samsonov stopped 24 of 27 shots (.889) in his only appearance, a 4-3 Gimmick loss to Pittsburgh to open the week. That would be his work for the week, he being one of the COVID Four to be suspended from play for four games for violating protocols.

Vanecek finished the week stopping 49 of 57 shots over two games (.860) in posting a 1-0-1 record.  Even though it was a two-game week for Vanecek, he had his ups and downs.  Although his save percentage in each game was under .900, how he got there took two different paths.  He had a very good even strength save percentage against Pittsburgh (.923), but allowing two power play goals on three shots did him in.  He was not so fortunate at evens against Buffalo to end the week, posting a .864 save percentage, the same as that posted by Samsonov against Pittsburgh to start the week.

Well, at least they got more opportunities in Week 2 than in Week 1, so that is progress.  On the other hand, the Caps managed a 4-on-3 power play goal last Sunday against the Penguins, but were otherwise blanked with the man advantage.  This despite recording a respectable ten power play shots in 10:56 of total ice time.  More disappointing, the Caps failed to convert a 54 second 5-on-3 opportunity against Pittsburgh in the middle game of the week, and then failed to convert the rest of the 5-on-4 in what would end as a 5-4 overtime win for the Pens.  Despite dressing for only two games in Week 2, Alex Ovechkin led the team with three power play shots on goal.  Nicklas Backstrom had the lone goal on two shots, and Justin Schultz added a pair of power play shots.

If there was an odd result for the Caps this week, it was in power play ice time.  Fourteen different skaters logged time on the man advantage.  While some of that is transition at the end of a man advantage (Zdeno Chara had nine seconds), ten skaters logged more than two full minutes for the week, three of them defensemen (John Carlson – 6:57; Justin Schultz – 4:58; and Dmitry Orlov – 2:23).  Nicklas Backstrom was the ice time leader with 7:50 in power play time.

But what was the low point of the week for the Caps came on its 5-on-3 power play in Tuesday’s game in Pittsburgh.  Holding a 4-2 lead and 54 seconds of a 5-on-3 advantage, with the chance to put the game away late in the second period, they allowed a Teddy Blueger breakaway 3-on-5 shothanded goal that started the Pens on a three-goal run, the last in overtime, to steal a 5-4 win and an extra standings point that the Caps left on the table.

It was an “Oreo” penalty killing week for the Caps – two perfect penalty killing efforts sandwiching a gooey mess in the middle.  The opened the week killing all five shorthanded situations they faced against Pittsburgh and holding the Penguins to only four shots on goal in eight minutes of power play time.  The Caps ended the week blanking the Buffalo Sabres on both of their power play chances and allowing four shots on goal in four minutes of Sabres power play time.

The middle game of the week did not go so well. There was that 3-on-5 shorthanded goal that the Pens scored to start their late game run, but in the midst of that the Caps allowed the Pens a pair of power play goals on three chances.  It is worth noting here that the Pens’ last four goals of that game were scored: power play, shorthanded, power play, 3-on-3 (overtime).  Not good game management, and the penalty kill was right in the middle of it.  The Pens had only three shots on goal in 3:15 of power play time, but that was enough to do damage to the Caps’ chances.

Faceoffs continue to be a blemish on the Caps’ weekly performances.  Only Carolina had a worse winning percentage in Week 2 (33.3), and they played only one game.  The 41.1 percent winning percentage even looks better than it was, the Caps finishing an abysmal 36.4 percent in the offensive zone and 41.1 percent in the defensive end.  The neutral zone wins (46.9 percent) did little to lift the overall result.

Nicklas Backstrom had a particularly frustrating week in the circle, managing a 29.8 percent win mark overall (31.6 in the offensive end, 25.0 percent in the defensive end).  None of the five Capitals taking ten draws or more overall managed a winning percentage in the offensive end. 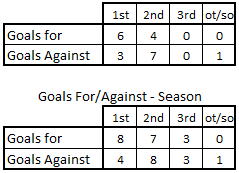 There is also the matter of power plays – opportunities to be specific.  The Caps to date have fewer than half the opportunities (nine) than they had through five games last season (20). A better conversion rate (22.2 percent versus 20.0 percent) makes no difference if the opportunities dry up. 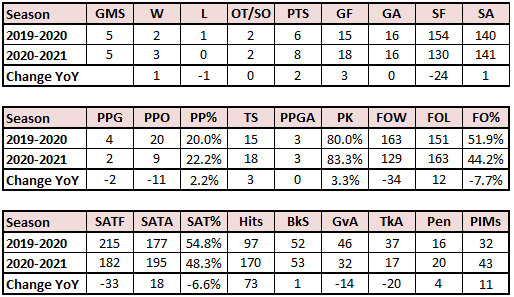 Only points count in the standings, and the Caps have points in all five games they have played to date.  Banking points is important, especially in a short season, but perhaps just as important when the underlying numbers just do not look very good.  Perhaps the rough edges are to be expected, what with the absence of preseason games and a new coaching staff.  But this is a veteran team, too, one with a considerable amount of talent.  They have a difficult stretch to come, with four players still on the shelf for disciplinary reasons and another key piece who might miss some time to injury.  Week 2 was an example of a team grinding through adversity to earn success in spite of it.  But these are issues the Caps will have to work through quickly if this season is to be successful.

Email ThisBlogThis!Share to TwitterShare to FacebookShare to Pinterest
Labels: 2020-2021 season, NHL, that was the week that was, the peerless prognosticator, Washington Capitals