Washington Capitals: That Was The Week That Was - Week 5

Week 5 for the Washington Capitals was a one-game week, and it was a bust at that.  By week’s end, the fine start to the season, at least insofar as wins and losses were concerned, were a memory.  The Caps posted their second consecutive losing week, but they had a full week to ponder their situation before beginning Week 6 as games with Philadelphia and Buffalo (the two-game set) were postponed due to COVID issues.  Fitting for an abbreviated week, we take an abbreviated look at the week that was. 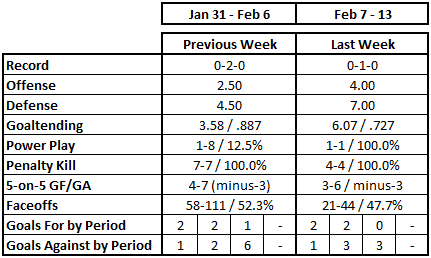 One game, one loss, one ugly 7-4 loss to the Philadelphia Flyers.  The details are here.

Not a good week, but at least Craig Anderson saw his first action as a Capital.  The bad news…he gave up a goal on the first shot he faced as a Cap, coming into the game in relief of Vitek Vanecek, who was excused from duty after two periods, the first time he was pulled in his NHL career.

One shot, one goal, one successful power play, 23 seconds elapsed.  When you have Alex Ovechkin, those things can happen.  But one power play?  Not enough. 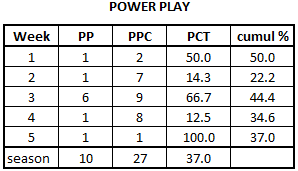 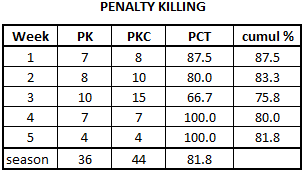 Not a good week, not a terrible week.  A “typical” week.  Dowd had a good week in this category, though.  Backstrom, not so much.

That third period.  The goal 31 seconds into that period by Sean Couturier to give the Flyers the lead took all the air out of the Caps’ balloon. 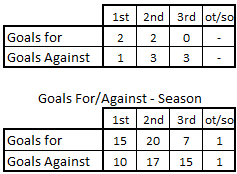 The slippage in recent games is clearly evident here, as the Caps have dropped under the performance level of last year’s club through 12 games in almost every category.  Even the improvement in power play efficiency is largely cancelled by 35.7 percent fewer power play chances, year over year. 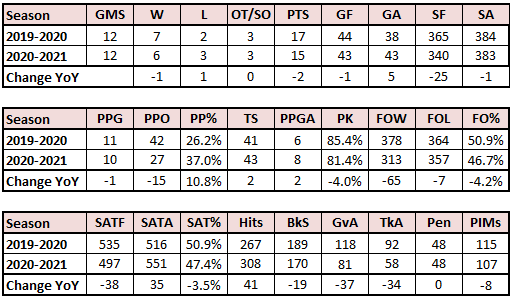 When does a “slide” become a “slump?”  The Caps have lost three consecutive games in regulation, something they did not do all last season and have not done since they lost four in a row – Games 45-48 – in 2018-2019 (that came during an overall seven game losing streak of 0-5-2).  The Caps are teetering on the brink of “slump,” something they can avoid with getting their full roster intact once more and a good Week 6 that starts against their long-time rival, the Pittsburgh Penguins, on Sunday afternoon.

Email ThisBlogThis!Share to TwitterShare to FacebookShare to Pinterest
Labels: 2020-2021 season, NHL, that was the week that was, the peerless prognosticator, Washington Capitals