In Week 6, the Washington Capitals marched in place.  And when it was over, the Caps found themselves in the midst of a crowd of teams – four of them, including the Caps – tied in standings points.  Losses to two teams beneath them in the standings made for a disappointing week that the Caps cannot afford as the schedule gets harder. 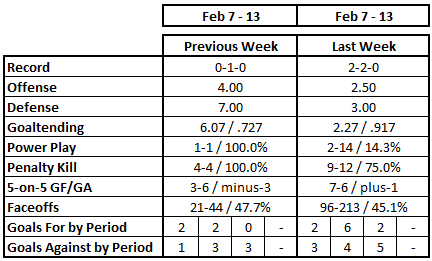 The Caps started and ended the week with losses and put together a pair of wins in the middle.  A split in Pittsburgh against the Penguins was not unexpected, and the win over the Buffalo Sabres in the third game of the week was no surprise, the Caps putting their fifth of eight games against the Sabres this season in the record book with a 4-0-1 record.  It was the game that ended the week that left a bad taste in the mouths of Capitals Nation and one that the team might live to regret.  A 4-1 loss to the New York Rangers, a team that had not won a game in regulation on the road this season, was the low point of the week, if not the season to date.  The 2-2-0 record left the Caps in third place in the East Division, after tie-breakers, and tied with Philadelphia, Pittsburgh, and the New York Islanders with 19 standings points.  A win over the Rangers could have left the Caps alone in second place in the division, one point behind the Boston Bruins. 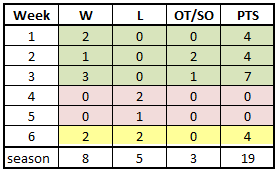 The Caps dropped eight spots in the scoring offense rankings with a week in which threes were wild – they scored three goals in each of the first three games of the week – before coming up short against the Rangers.  The one goal Washington scored against the New Yorkers was their lowest offensive output of the season to date.

Seven Caps shared in the ten goals for the week with Jakub Vrana, Conor Sheary, and Nicklas Backstrom each notching a pair.  Alex Ovechkin wen 0-for-15 shooting in “frustrating scoring line of the week.”  He did have a pair of assists, though.  There were 14 skaters recording points for the week, which shows something for balance, but only two players – Backstrom and Lars Eller – posted as many as three.

It was a frustrating shooting week for the Caps.  Four players posted ten or more shots on goal.  Ovechkin (15), Vrana (14), Eller (11), and Nick Jensen (10).  Of the 50 shots recorded by this quartet, only three goals were recorded, two by Vrana and one by Eller.  The ten shots on goal by Jensen more than doubled his season total, from eight in his first nine games to 18 through 13 games played.

In that same span of time, starting with the 2010-2011 season, the Caps allowed seven or more goals only 13 times.  They lost in every instance, as one might expect (0-10-3).  They lost their 14th instance, too.  If offense is flashy, defense wins.  If you believe that, then Week 6 is a piece of evidence.  The Caps allowed six goals to Pittsburgh (including two empty-netters) and four to the Rangers (one empty-netter), and the Caps lost both games.  They gave up single goals to the Penguins in the rematch and to Buffalo in the third game of the week in wins.

Vitek Vanecek got all four games of the week, extending his string of consecutive starts to 13 games.  The effects of the heavy workload are showing.  Over his first seven games this season he stopped 223 of 243 shots, a .918 save percentage, and allowed more than three goals only once, in a 5-4 overtime loss to the Penguins on January 19th.  But over his last seven games he stopped just 165 of 185 shots, a .892 save percentage, and has allowed more than three goals three times.

Vanecek had a good week in Week 6, stopping 100 of 109 shots (.917), so if one might want to put the best spin on it, he seems to be fighting through the wall of mental or physical fatigue he might be experiencing.  On the other hand, his performances have been inconsistent, within games and from game-to-game, his rebound control being a continuing issue (perhaps a product of his workload).  Even within Week 6, two sub-.900 save percentage games bracketed by over-.950 save percentage games in the middle of the week are evidence of the issues with consistency he is experiencing.

Whether is it predictability, a lack of crisp puck movement, bad luck, or sunspots, the Caps’ power play leaves much to be desired these days.  On the one hand, they posted 26 power play shots on goal in four games this week in 26:44 of power play ice time, not a bad shots-per-minute number.  And, they got power play shots from a lot of players, ten in all.  They got shots from players who matter – Alex Ovechkin (seven), Evgeny Kuznetsov (five), and three apiece from John Carlson, Tom Wilson, and Lars Eller.

Still, the Caps were just 2-for-14 for the week, their 14.3 percent conversion rate tied for 19th place for the week.  Disturbing in this is the Caps inability to make teams pay when they go to the penalty box frequently.  Washington is just 3-for-25 (12.0 percent) in six games this season when they had four or more power play chances (1-for-17 in their last four such games), while at the other end they had power play goals in three of the five games in which they had but one chance.  Of particular concern is that Alex Ovechkin has one power play goal on 19 shots in 12 games this season (he does have four power play assists). 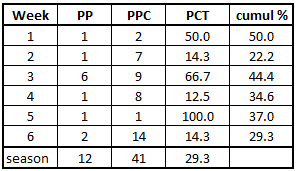 A so-so week on the penalty kill became one of the disappointments when the Caps found themselves allowing two power play goals on ten chances to teams ranking in the bottom third of the power play rankings (Pittsburgh: 24th; New York Rangers: 27th).  The 75.0 percent penalty killing week left the Caps tied for 23rd in the league for the week and dropped them into a tie for 15th in the league for the season at week’s end.

The Caps did a reasonable job of limiting shots, allowing 16 in 19:13 of penalty killing ice time, but the timing of their failures was unfortunate.  Bryan Rust’s power play goal in the second period of the first game of the week allowed the Penguins to regain a lead they gave up only three minutes earlier in the period.  The Pens never trailed again.  Chris Kreider’s power play goal opened the scoring for the Rangers in the last game of the week, putting the Caps on their heels and giving the Blueshirts a lead they would not yield.

After shutting out opponents on power plays in three straight games, the Caps have now allowed a power play goal in three of their last four contests.  And, they have faced three or more shorthanded situations in five straight contests and ten of their last 11.  This is not a recipe for success. 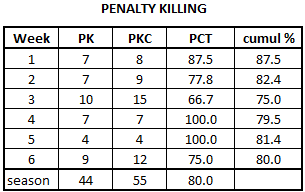 A 45.1 percent week in winning faceoff percentage is not good, but it looks better than it was.  The Caps were an abysmal 36.8 percent on offensive zone draws (32-for-87), forcing them to play “chase the puck.”  It wasn’t a lot better in the defensive end, where the Caps were 29-for-63 (46.0 percent).  What is frustrating about this is that the 24 faceoff differential between offensive and defensive zone draws suggest the potential to tilt the ice in the Caps’ favor, but they were not able to translate that into wins.

But here is the thing.  If you take away one player’s performance for the week, the Caps were 86-for-167, a 51.5 percent winning percentage that is quite good.  And that player?  Nicklas Backstrom.  For whatever reason (and our untrained, perhaps uninformed eye can’t help but see and think “lingering injury effects”), Backstrom is, for the moment, a liability in the circle.  He was 10-for-46 for the week (21.7 percent).  Only four times in 16 games has Backstrom won 50 percent of more of his draws taken, and five times he finished under 30 percent.  Only once this season in eight games did he take 15 or more faceoffs and win more than 50 percent of them.

If the Caps played only second periods, they would be fine.  They outscored opponents, 6-4, for the week, and that increased their season differential in the middle frame to 26 for and 21 against (plus-5).  In the first and third periods, it was 2-3 and 2-5, respectively, although the entire differential in the third period was empty net goals.  Losing the first periods of games and allowing three goals was a bit odd, since the Caps came into the week having allowed only ten goals in 12 first periods this season.  They were rolled over in the third period in Week 6, but that is not unusual, either, nor is it something they can tolerate.  The 2-5 deficit for the week left them with just nine third period goals scored for the season (tied for fewest in the league) and 20 scored against (tied for seventh-most). 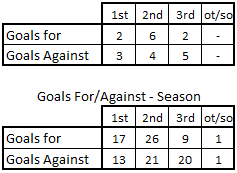 The Caps found themselves slipping further behind last year’s club at a similar point in the schedule.  Through Game 16 on the schedule last season, the Caps were on a 7-0-1 run (a streak of games with points they would extend to 13 (11-0-2).  This year’s club is 2-5-0 in their last seven games. 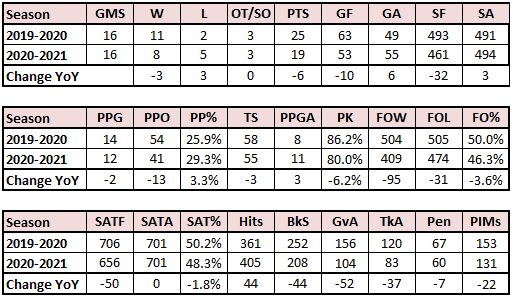 We are getting past the “but COVID” category of explanations for poor performance by the Caps.  The loss to the Rangers at home is the kind that can end up sinking the team over the long haul because frankly, the Caps had no business losing to that team and ended up leaving two points on the table they might need in a few months.  There was just too little on which to hang one’s hat to pronounce this an acceptable week, let alone a good one.  And it represents an opportunity lost because starting I Week 7, the Caps’ next 11 games include four against the Devils (a team with a better points percentage than the Caps), two with Pittsburgh, two with Boston, and three against Philadelphia.  Now the hard part begins.