Week 9 was quite the week for the Washington Capitals.  Tom Wilson’s suspension, Lars Eller’s absence, then his return, then his injury, a Nick Jensen two-fer (a goal, a two-point game), an offensive explosion, a (near) defensive collapse, and that is before we get to the… 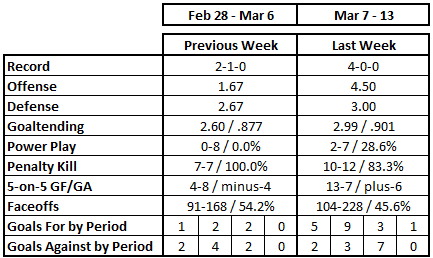 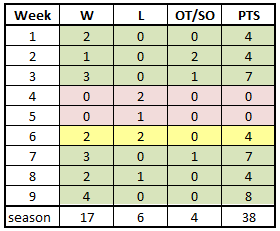 If Week 8’s adjective of “anemic” could be applied to the Caps’ offense, the adjective for Week 9 might be “explosive.”  The 4.50 goals per game were tied for second in the league for the week, with the Detroit Red Wings, trailing only the New York Islanders (5.00).  After opening the week with three goals against the Flyers, the Caps scored five goals in three straight games, the first time the Caps scored that many in three consecutive games since Games 9-11 last season when they posted five against the New York Rangers, Chicago Blackhawks, and Calgary Flames.

The Caps’ leading goal scorers for the week came from opposite ends of the forward spectrum, top left wing Alex Ovechkin and fourth line center Nic Dowd each with three.  Six Caps in all had multi-goal weeks with Jakub Vrana, Dmitry Orlov, Daniel Sprong, and Nick Jensen adding a pair apiece.  For Jensen, his goal against the Flyers to close the scoring in the Caps’ 3-1 win to open the week was his first goal as a Capital and broke a personal streak of 165 games without one, his most recent goal before that coming as part of a two-goal effort in a 5-3 loss to the Toronto Maple Leafs on October 11, 2018.  All in all, ten of the 19 Caps to dress for the week recorded goals.

Vrana and John Carlson led the club with five points apiece for the week.  It was an odd pairing of leading scorers.  It was not a matter of matching the skilled to the unskilled species of scorers, both are skilled in that area.  The difference was that while Carlson earned his points while posting the most ice time for the week (22:24 minutes per game), Vrana did it while averaging just 12:22 per game, third lowest among forwards (and that includes Lars Eller, who skated only three shifts and 1:29 in the Saturday win over the Flyers before leaving with an injury).

What was especially encouraging for the Caps was getting offense from five of the seven defensemen to dress – three defensemen had goals (Jensen (2), Orlov (2), and Carlson), while Zdeno Chara had two assists and Justin Schultz one.

The Caps scoring defense for the year dropped in Week 9, and yet it was not a good week.  In each of the last three games of the week they got out to three-goal leads only to give one back before winning in overtime (a 5-4 win over New Jersey in the second game of the week) and twice barely holding off the Flyers before hanging on for wins.  The odd part of it was that 11 of the 19 skaters to dress this week had positive goal differentials at even strength, and no Capital was worse than a minus-2. However, 15 of those 19 skaters were on ice for at least two even strength goals against over the four games, six of them on ice for four or more goals (Nicklas Backstrom and T.J. Oshie were on ice for five against and were two of those Caps with minus goal differentials).

If Week 9 was a bad week for defense, perhaps a heaping helping of the bitter brew could be laid at the feet of the goaltenders.  It was a week of deterioration for Ilya Samsonov and Vitek Vanecek generally, with the save percentages dropping period by period over the course of the week -- .952 in the first periods of games, .919 in the middle periods, and .870 in the third periods of games.

Ilya Samsonov got the biggest share of work for the week, getting all three starts against Philadelphia.  He had a mixed week.  On the one hand, he won all three games, the first three decisions he has posted against the Flyers in his brief career to date.  On the other hand, while his save percentage for the week was quite good (.922), the third periods of games (.895) were quite a drop off from the first two periods of games (first period: .939; second period: .935).  The third periods of the last two games was of the sort one might want to turn away from seeing (.826), and he did it while facing only 23 shots over those 40 minutes worth of third periods (19 saves on 23 shots).

Vitek Vanecek got the other start for the week, facing the New Jersey Devils.  Despite the one appearance, he was not immune to a late-game collapse in save percentage.  He stopped all nine shots he faced in the first period against the Devils, and he allowed only one goal on six shot in the middle period, but the third period was not for the scrapbook.  Vanecek allowed three goals on 16 shots faced in the third period to allow the Devils to force overtime.  The Caps scored before Vanecek faced a shot in the extra session to enable him to put a mark in the win column.

Neither goalie really took the number one job by the throat, but after as many games as Samsonov has missed before this week, Week 9 was a matter of seeing just how much progress he has made in trying to recapture the number one spot.

The number that leaps off the page in this category is “seven.”  No team playing four games had as few powerplay chances for the week as the Caps, an only two teams that played three games apiece had fewer (Columbus and Toronto each had six chances in three games).  The Caps ended the week having had the fewest power play chances in the league (67), giving the league’s sixth-most efficient power play few chances to take advantage of their overall efficiency.

But about that “overall” efficiency.  In three road games this week, all in Philadelphia, the Caps were 1-for-5.  That 20.0 percent was not particularly impressive on its own, but given that it raised the Caps’ road power play to 11.1 percent for the season (28th in the league), it was a considerable improvement, even with the single goal scored.

It was not as if the Caps were not getting shots from players they want getting them.  Of the 14 shots on goal with the man advantage, Alex Ovechkin had half of them (seven) and one of the team’s power play goals. Jakub Vrana had a pair, and five other Caps had one apiece, including T.J. Oshie, who had the team’s other power play goal for the week.

All told, the Caps had 14 shots on goal in 12:34 of power play ice time, not a bad shots per minute result, but it was a light week for power plays for the Caps, a lingering issue. 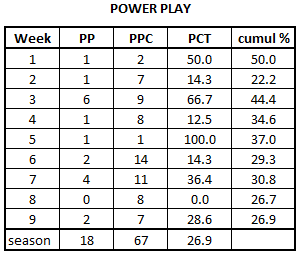 The issue here was not efficiency, which was an improvement over the season penalty kill to date, but the fact that the Caps had almost twice as many shorthanded situations to defend as power play chances to enjoy.  That the Caps were as efficient as they were allowed them to keep the special teams goal differential at “even” for the week.

One problem here was taking penalties late in games.  Six of the 16 penalties the Caps took for the week (their total tied for second-most in the league for the week and their net penalties taken tied for fourth-worst for the week) occurred in the third periods of games.

It was a mixed week, though, split into two discrete halves.  In the first two games, Samsonov and Vanecek stopped all seven power plays they faced and all eight shots they faced in 12 minutes of shorthanded ice time.  In the last two games, though, Samsonov allowed two goals on five power plays, stopping five of seven shots in 7:10 of shorthanded ice time.  That will have to improve. 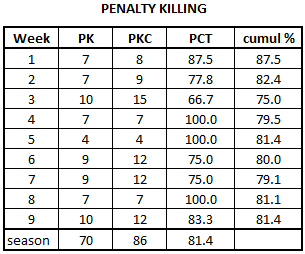 The Caps fell back on old ways in Week 9, a mid-40’s winning percentage as a team on faceoffs.  It was worse in the particulars.  The Caps finished under 42 percent in each of the ends, managing a winning share over 50 percent in only neutral zone draws.  The Caps did face the third-best team in the league on draws in the Flyers three times, so an under-50 percent result might have been expected, especially on Flyer ice.  But under 50 percent against the second-worst team in the league in faceoffs in the Devils, on home ice, was a disappointment.

First periods…good (five goals for, two against).  Second periods…better (nine for, three against).  Third periods…not good (three for, seven against).  Worse, five of the seven goals allowed in the third periods of games came in the last ten minutes of regulation play.  It allowed the Devils to wipe out a 4-1 lead that the Caps took into the third period of their game and force overtime, got the Flyers to within a goal in their second game of the week before the Caps potted an empty netter in the last minute to clinch the win, and allowed the Flyers to close within a goal with under three minutes left in regulation of the last game of the week before the Caps hung on to win.  At week’s end the Caps had allowed 32 third period goals, tied for eighth-most in the league and with a minus-9 third period goal differential for the season, fourth-worst in the league. 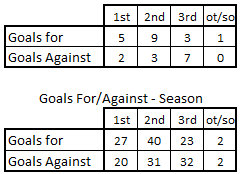 A four-win week will enable a team to catch up in some areas on a year-over-year comparison.  For instance, the Caps are now just one win and three standings points behind last year’s fast-starting team.  Scoring is catching up, thanks to three straight five goal games to end the week, although last year’s team had nine games of five or more goals by the 27 game mark compared to seven for this year’s club.  This year’s power play is more efficient overall than last year’s, but they are doing it with significantly fewer chances (about two-thirds fewer chances per game).  In almost all other areas, however, the Caps still lag significantly. 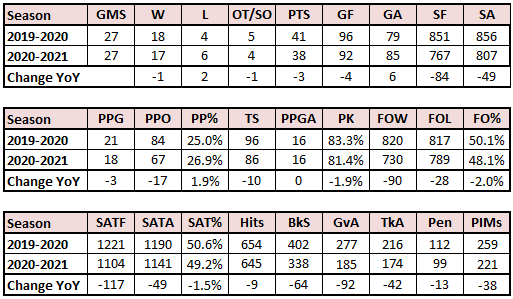 Let us repeat… “wins matter most.”  There no standings points awarded for expected goals or shot attempt differential at fives or prettiest uniforms.  And once earned, standing points cannot be taken away.  Nevertheless, there were warning signs that the winning streak is not all it seems that those underlying trends give ominous hints that the streak is coming to an end.  A team cannot be as loose as the Caps were in Week 9 in third periods and sustain any consistent level of success.

The Caps will have a chance to remedy this situation in Week 10 with three of four games on the slate against what might be viewed as weaker teams – at Buffalo and twice in New York against the Rangers.  And, there is a chance to take a bite out of the division-leading New York Islanders at home.  As the Caps embark on the second half of the regular season schedule, it is time to button things up tighter over a full 60 minutes.