It was a light work week for the Washington Capitals, both in terms of games played and strength of opponent.  The Caps looked a bit rusty at times in their first of two games against the New Jersey Devils, but they hung on for a victory before dominating the Devils in the second of the two games to make it a successful week. 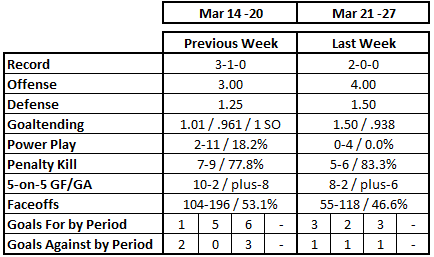 The Caps came into the week and their two-game set against the New Jersey Devils having won all four previous meetings this season, outscoring the Devs, 17-11.  They ended the week 6-0-0 against New Jersey with a 25-14 edge in scoring.  In doing so, the Caps also ended the week with a 16-3-1 record in 19 games since they suffered a four-game losing streak in early February.  At no time over those 20 games did Washington lose consecutive games, and their .825 points percentage over that span is best in the league. 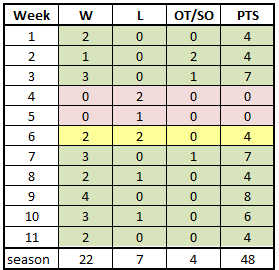 There were some dark spots, though.  The Caps did not get a point out of the Carl Hagelin-Nic Dowd-Garnet Hathaway fourth line, and all of them were a minus-1 for the week (Richard Panik was the only other Caps with a minus rating, going minus-1).  Jakub Vrana did not record a point and had only two shots on goal, averaging ony 11:40 in ice time for the two games.

The Caps held the Devils to 48 shots over the two games, the 24.0 average being second-best in the league for the week (St. Louis: 23.2).  They allowed only 86 shot attempts at 5-on-5, tied for second-fewest among the eight teams playing two games in Week 11.  It is part of a pattern of stinginess the Caps have exhibited lately.  Four times in their last nine games they allowed fewer than 25 shots on goal.

In a week in which the Caps allowed only two goals a 5-on-5, one would not expect any individual Capital to be significantly victimized, and that was the case this week.  Ten Caps were on ice for a 5-on-5 goal, each of them for only one goal against.

Another split week for the goalies, and it was a case of Ilya Samsonov probably cementing his role as the Caps number one netminder down the stretch run.  Vitek Vanecek stopped 21 of 24 shots in his 59:40 of work for the week, getting the decision in the Caps’ 4-3 win to start the week against New Jersey.  It extended an odd month for Vanecek, who has been either very good or very mediocre stopping pucks in his six March appearances.  Three times he posted a save percentage of .947 or higher, including a shutout against Buffalo.  On the other hand, three times he posted save percentages of .875 or worse, allowing three or more goals in each, including a 14-for-18 effort in just 35:43 of work against Boston in a 5-1 loss on March 5th.

At the other end of the scale, Samsonov posted his first shutout of the season, a 24-save effort, in the Caps’ 4-0 win over the Devils on Friday.  With that win, Samsonov has a save percentage under .900 in two of seven appearances this month, and he has save percentages of .955 or better in three games, posting an overall March record of 5-`-0 (one no decision), 1.88. .933, with one shutout.  His .933 save percentage for the month is fifth-best of the 40 goalies with 300 or more minutes.

Few chances, no success.  The Caps spread the shots around, but that was good and bad.  Six Caps shared the nine power play shots on goal, with Jakub Vrana, Nicklas Backstrom, and Evgeny Kuznetsov each getting a pair.  On the other hand, they had one shot on goal from Alex Ovechkin and only one from a player in the middle of the 1-3-1 layout (T.J. Oshie).  The Caps had those nine shots in 8:00 of power play time, not a bad shots per minute rate.  But they seemed not to get them from scoring areas or from rebounds.  What made it a little harder to take was that despite being better of late, the Devils are a poor road penalty killing team (66.0 percent at week’s end). 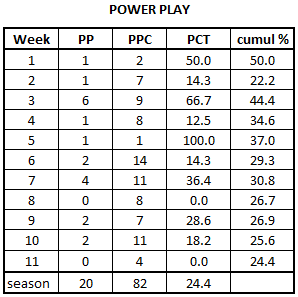 It was not a bad week for the Caps on the PK.  Allowing three power plays in each of the two games is not a bad amount to allow, and the Caps allowed only nine shots in 10:26 of shorthanded ice time.  The result was more or less an average week of penalty killing for the Caps. 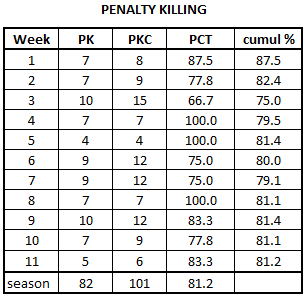 Here was another category that was rather average for the Caps, by their standards this season.  The odd part of it was that the Caps were under 50 percent against a team worse than them in faceoffs (46.3 percent for the season at week’s end).  On the good side, the Caps were a bit better in the ends (a combined 40-for-79/50.6 percent) than they were in the neutral zone against the Devils (15-for-39/38.5 percent).

Nic Dowd was once more an above 50 percent player for the week in this category, and Nicklas Backstrom had a 50-plus percent week as well.  With Lars Eller out, T.J. Oshie took a heavier load in draws than usual, tying Dowd for second-highest number of faceoffs taken.  In a related point, the faceoff duties were parceled out by the ends rather cleanly.  Oshie and Evgeny Kuznetsov took primarily offensive zone draws (13 and 14, respectively), while Dowd and Backstrom took most of their draws in the defensive end (16 and 14, respectively). 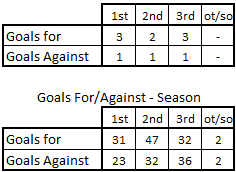 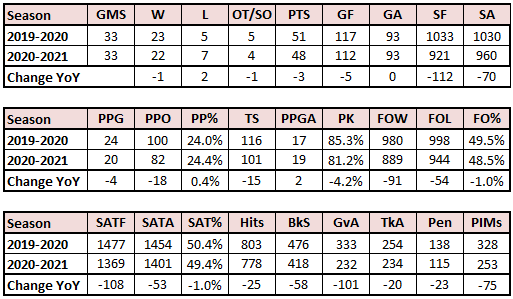 Even with the absences of Tom Wilson (suspension) and Lars Eller (injury), plus a nicked up Alex Ovechkin (who did not miss any games, but has missed practice for “maintenance”), the Caps are rolling.  They have survived the absences by doing things in what some might call the “right way.”  They have been extraordinarily stingy, their 2.20 goals allowed per game over their 16-3-1 run since February 16th being second-best in the league.  It is the kind of result that can be sustained with effort, and with the East Division now bunched up at the top, with three teams separated by two points, effort is precisely what the Caps need as they prepare for the last third of the regular season.