Week 14 for the Washington Capitals was one of those weeks where one looks at a 3-1-0 record and thinks, “not bad.”  But the next thought might be, “they are going to regret that loss.”  Perhaps it is the perpetual pessimism that comes with being a Caps fan, but in the midst of a fine week, there was that loss that should not have been. 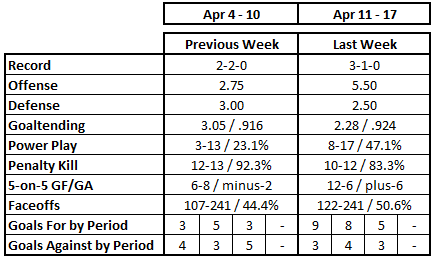 You would think by now that the edges would start fraying for the Caps.  Week 14 was their third straight four-game week and fifth in the last six.  In eight four-game weeks this season, the Caps had winning weeks five times and break-even weeks three times.  Week 14 was the fifth winning four-game week of the year, and while a 3-1-0 week is something to cheer about, it is that loss that sticks in one’s mind.  The Buffalo Sabres are in the midst of a forgettable season, traded off valuable assets for futures, and were visiting a Caps team that went into the game 8-2-0 in their previous ten home games, outscoring opponents, 39-28.  The Caps lost, and it was not close, a 5-2 loss that was Buffalo’s first win on the road by three goals in almost two months.

Other than that, it was a very good week for the Caps, who beat their other three opponents by a combined 20-5 margin.  Granted, the Caps caught the Boston Bruins in a weakened state on defense and in goal due to injuries, and the Philadelphia Flyers have been fading for weeks, but both still have playoff hopes in mind and have something to play for. 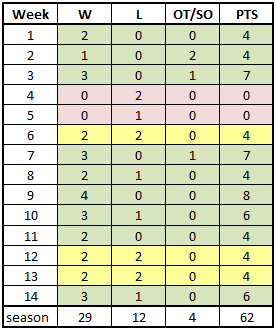 It would be hard to have a week as good as Week 14 was on offense for the Caps.  Twenty two goals scored in four games, 11 different players with goals, 17 with points.  John Carlson had a big week, posting seven assists to take over the league lead in points among defensemen (42).  He has been on better than a point per game pace since early March, going 5-18-23, plus-7, in 22 games.  It might not be coincidence that the Caps are 16-6-0 over those 22 games.

The team leader in goals for the week was a surprise.  Conor Sheary had four goals in the four games, but he had support with six other Caps having multi-goal weeks.  One of those other Caps with a multi-goal week was newcomer Anthony Mantha, who posted a goal in each of his first three games with the Caps and extended his personal goal streak to a career-high four games (he scored one in his last game with Detroit).

Alex Ovechkin was the other Capitals with a three-goal week, all of them on power plays.  The three goals for Ovechkin brought him to 730 career goals, one short of Marcel Dionne for fifth place on the NHL’s all-time goal scoring list.

Only Dmitry Orlov among defensemen recorded a goal (he had two), but the defense was contributing.  Four of the six defensemen to dress in Week 14 combined for 14 points in the four games.  For Orlov it was continuation of a productive run of late in which he has gone 4-6-10, plus-12, in his last 14 games.

As in other categories, it was a mostly very good week for the goaltenders.  In fact, but for one bad period, it would have been an excellent week.  But there was that period, the second period against the Buffalo Sabres in which Vitek Vanecek allowed three goals on nine shots and was relieved by Craig Anderson.  Take that period away, and the Caps goalies would have had a .945 save percentage for the week.  Even taking away Anderson’s contribution for the week (eight saves in as many shots faced), the Caps would have had a .941 save percentage.

Vanecek’s second period adventure against Buffalo was a dark spot on an otherwise bright week.  In his other four periods of play he stopped 45 of 47 shots (.957 save percentage).  But that second period against the Sabres in the midst of an otherwise good week highlights the hint of inconsistency in his game.  In 30 appearances this season he has seven in which his save percentage topped .950, and in six games it was under .850.  Only five goalies this season have more games with save percentages under .850 than Vanecek.

Ilya Samsonov had his own consistency issues in two appearances.  He stopped 29 of 30 shots in the Caps’ 6-1 win over the Flyers in the second game of the week.  But he took a few shots off his helmet in that one, and he was shelved for the next game against Boston.  He returned on Saturday in the Caps’ 6-3 win over Philadelphia, but the experience a few nights earlier might have affected his performance.  He stopped 22 of 25 shots (.880 save percentage) in the win.

Craig Anderson got some work in as well, relieving Vanecek in the 5-2 loss to Buffalo and stopping all eight shots he faced.  It was only his third appearance of the season and first since February 21st, a 4-3 win over New Jersey that is his only win of the season.

The Caps did not finish over 50 percent for the week on the power play. That is about the worst you can say about the power play in Week 14.  The eight power play goals exceeded the total for the Caps over the previous four weeks (7-for-37), and the 17 chances is a high for any single week this season.  The 4.25 chances per game were second in the league for the week (Edmonton: 6.00). 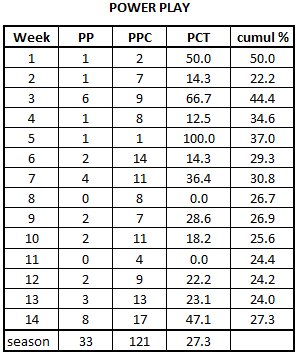 It was a decent week for the Caps on the penalty kill, but it also was the third consecutive week they had ten or more shorthanded situations.  While that is something to watch, their 3.00 situations faced per game ranked tied for 17th-fewest in the league.  Not good, not bad.  What helped was that the two power play goals allowed occurred in games in which the Caps had leads – 6-0 against the Bruins when they recorded one in an 8-1 Caps win, and the other against Philadelphia when the Caps had a 4-2 lead in the second meeting of the teams this week. 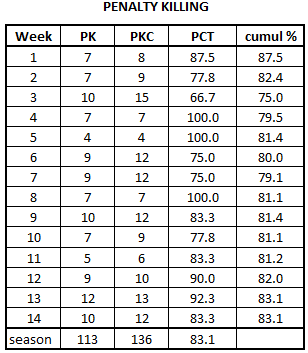 It was a good week overall in the circle, but uneven in the details.  There was a distinct difference between success in the defensive end (56.9 percent) and lack of it in the offensive end (44.6 percent).  Lars Eller (59.1 percent) and Nicklas Backstrom (54.5 percent) were the only Caps among the seven taking any offensive zone faceoffs to finish over 50 percent.  At the other end, in an odd turn of events, Nic Dowd was the only one of eight Caps taking defensive zone draws to finish under 50 percent (48.5 percent).  Backstrom led all Caps in overall winning percentage (65.7 percent; minimum: five faceoffs).

Getting out to leads has not been a big problem for the Caps, it is holding them.  This week was an exception.  They overwhelmed teams in the first periods of games, outscoring opponents in the four games, 9-3, in the first period.  They maintained that edge in the second periods of games (8-4) and even the third period (5-3), which has been a bit of a problem this season.  The Caps finished the week with the most first period goals scored in the league (47) and most goals in the second periods of games (66). The Caps still have work to do late in games, their 54 goals allowed tied for fourth-most in the league at week’s end. 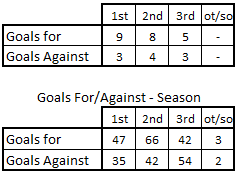 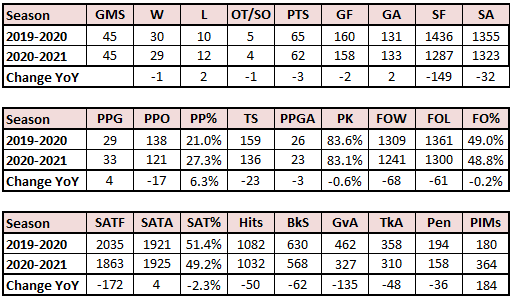 It was a very good week, but one still cannot help but think the Caps left two points on the table against a weak team that could haunt them down the road in the ultra-competitive East Division.  But the Caps remain at the top of the division after 14 weeks, only now it is the Pittsburgh Penguins on their heels, three points back in second place.  It would be nice to have that bigger margin a win over Buffalo would have provided, what with the Caps now facing a difficult schedule over their last 11 games.  But any lead is a good lead, and the Caps have it.