We are at the end of it, and we are perhaps at the beginning of it.  The regular season ends for the Washington Capitals on Tuesday night when they host the Boston Bruins at Capital One Arena.  This contest also might be viewed as “Game 0” of the first round of the playoffs, inasmuch as the current standings would have the Caps hosting the Bruins in the East Division semi-final round of the postseason.

Boston plays the first of a back-to-back to close their season when they host the New York Islanders in the last game of their home season on Monday night (if Boston wins, they clinch third place in the division and a first round matchup with the Caps).  Going into that game, it is hard to say whether the Bruins are hot, cold, or hot and cold.  They are 11-3-1 over their last 15 games, but how they built that record might be of some concern.  A six-game winning streak was followed by consecutive losses, and then they rattled off a four-game winning streak before alternating losses and a win in their last three contests.

Over span covering those 15 games, only the Minnesota Wild have more standings points (11-1-2/24) than the Bruins (11-3-1/23), and Boston is fifth in points percentage (.767), best in the East Division.  It probably will not surprise anyone that Brad Marchand leads the team in goals (nine) and points (15) over those 15 games.  After all, as of Monday morning, Marchand leads the Bruins for the season in goals (28) and points (67), and he ranks tied for sixth in the league in goals and is third in points.

Marchand, the player who might be the only one hated around the league more than the Caps’ Tom Wilson, has the temerity to be a really good offensive player.  Only COVID, this year and last that resulted in abbreviated schedules, are likely to prevent him from posting six straight 30-goal seasons (he had 28 in 70 games last season).  COVID will prevent him from posting a fifth straight 80-point season (he had four straight coming into this season, including 87 in 70 games last season).  He is one of two players to post at least 200 goals over the last six seasons (202; Alex Ovechkin has 255), he ranks fourth in total points over those six seasons (485), and he is sixth in points per game over that span (1.14).  As if to rub salt in the wounds of opponents who bristle at his antics outside the rules, he has 41 game-winning goals over the last six seasons, second only the Connor McDavid (43), and no player has more overtime goals (12, tied with Jonathan Toews).  If he manages a goal against the Caps, he will become only the second player over the last six seasons to score 100 goals on the road (Ovechkin: 132).  Marchand is 7-6-13, plus-12, in seven games against the Caps this season and 15-18-33, plus-2, in 39 career games against Washington.

One expects Marchand, David Pastrnak, and Patrice Bergeron to be among the top goal scorers and point getters for the Bruins, but Nick Ritchie?  The six-year pro spent four-plus seasons with the Anaheim Ducks after being taken with the tenth overall pick of the 2014 Entry Draft by the Ducks, before he was traded to Boston for Danton Heinen in February 2020.  His high in goal scoring in those four-plus seasons with the Ducks was 14 in his sophomore season of 2016-2017.  Ritchie has already passed that career high in his first full season with Boston, recording 15 goals in 54 games.  The odd part of that, though, is that despite ranking fourth on the team in goal scoring (behind the trio mentioned above) and seventh in points (26), he has the fourth-worst plus-minus rating (minus-7) on the team.  Another odd fact about Ritchie’s season is that he has a career-high five power play goals, shattering his previous high (two, in 2018-2019 and 2019-2020).  In fact, he had a total of six career power play goals in 294 career games before posting five in 54 games this season, good for third on the team behind Bergeron (seven) and Pastrnak (six).  Ritchie has been hot of late, scoring five goals on 22 shots (22.7 percent shooting) in his last ten games.  He is 2-1-3, even, against the Caps this season and 4-1-5, minus-1, in 16 career games against Washington.

Boston has had a hard time icing a consistent squad of defensemen this season.  None have appeared in every game for the Bruins, and only one – Charlie McAvoy – has appeared in as many as 50.  No other Bruin defenseman has appeared in more than 43 games (Connor Clifton).  But injuries have not slowed Matt Grzelcyk from being a producer from the blue line.  Despite missing 18 games to four different injuries, the slightly-built Grzelcyk (5’9”/174) is tied for the team lead in goals among defensemen (five, with McAvoy) and is the only defenseman other than McAvoy to record double-digits in points (20, to McAvoy’s 30).  He, McAvoy, and Steven Kampfer are the only defensemen to post power play goals for the Bruins this season.  For Grzelcyk, it is quite a bump up in productivity.  Over his previous three seasons in Boston he was consistent, averaging between 0.05 and 0.06 goals per game per season and averaging between 0.27 and 0.31 points per game per season.  This year, his production jumped significantly, more than doubling last year’s goals per game (from 0.06 to 0.14) and almost doubling his points per game (from 0.31 to 0.56).  Grzelcyk is finishing strong, going 1-4-5, plus-7, in his last five games.  He is 0-1-, plus-4, in three games against Washington this season and 0-2-2, plus-6, in 11 career games against the Caps. 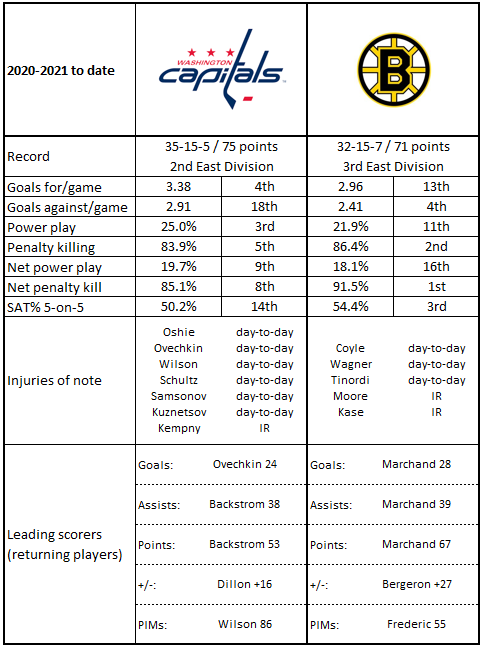 1.  Boston is 4-3-1 in their last eight road games, outscoring opponents, 22-16. In five of those eight games they allowed one or no goals (two shutouts).

2.  The Bruins lead the league overall in number of games allowing one or no goals (20), but they have just a 16-4-0 in those games, the four losses in regulation also leading the league.

1.  The Caps have only 16 wins on home ice this season, tied for 12th in the league (with Edmonton).

4.  For their growing reputation (true or not) for nastiness, the Caps have only four major penalties on home ice this season.  Only four teams in the league have fewer (the New York Islanders, Winnipeg  Jets, Buffalo Sabres, and Carolina Hurricanes).

5.  The Caps are still waiting for a power play goal from any defenseman other than John Carlson this season (three).  None of the other seven defensemen to dress for the Caps this season have one.

Sometimes it seems as if David Krejci has been a Bruin since the days of Milt Schmidt and Dit Clapper.  But the fact is that he has been in the league only since 2006-2007, entering the league one season after Alex Ovechkin and Sidney Crosby.  In his 15 years as a Bruin, Krejci has built an impressive resume.  He ranks seventh in games played for the club (961 as of Monday morning), 16th in goals (215), seventh in assists (512), eighth in points (727), 18th in plus-minus rating (plus-141), tied for 20th in power play goals (50), ninth in power play points (190), tenth in game-winning goals (41), and tied for fifth in overtime goals (five).

When the Caps obtained Daniel Sprong in a trade with the Anaheim Ducks for defenseman Christian Djoos in February 2020, one might have been forgiven for the front office, let alone fans, not quite knowing what they got in the 22-year old winger.  In four seasons with Pittsburgh and Anaheim he showed a brief glimpse of what was possible, posing 14 goals in 63 games split between the Penguins and Ducks in 2018-2019.  But otherwise he seemed a bit of a disappointment, posting a 5-2-7, minus-3 scoring line in his other three seasons preceding his trade to Washington.  He played only five games with the Hershey Bears in the AHL, going 1-5-6, minus-1, not much evidence to project his future with the Caps.

Even early on in this season, it was difficult to see if Sprong could fill some or all of his potential as an offensive contributor.  In his first 13 games he was 3-1-4, even.  He averaged just 9:21 in ice time, stapled to the fourth line for the most part, topping ten minutes of ice time only six times in those 13 games.  Not bad, but not much to predict in terms of his future.  But then, his season took a turn.  He put together a four-game points streak in early March (3-1-4, plus-5), and his ice time got a jolt, up to 13:25 per game over that short stretch.  Since then, he has been something of a good luck charm, going 7-5-12, plus-3, with three game-winning goals in 24 games while averaging 12:38 in ice time per game.  Odd Sprong fact… if he goes 1-1-2, plus-2, and the goal is a game winner at even strength, not an altogether rare occurrence in the NHL, he would finish the season 7-4-11, plus-5, with seven even strength goals and two game winners both at home and on the road.  He is 1-1-2, plus-2, in four games against the Bruins this season (something to keep in mind) and 1-1-2, minus-2, in nine career games against Boston.

The last game of the season for the Caps is something to be endured with the hope that no one else succumbs to injury and those who are sitting out can use the time off to get better sooner before the postseason starts.  The game isn’t “meaningless,” a term that might mean more to fans than to players or coaches.  After all, this could be a preview of the Caps opening playoff round.  If anything, this game brings to mind the old Vince Lombardi quote about winning and commitment…

“Winning is not a sometime thing, it is an all the time thing. You don’t do things right once in a while…you do them right all the time.”

In this case, “winning is an all the time thing” might not apply to this game, but for the players who do dress, doing things right all the time is what matters.  And if they do that, winning just might take care of itself.