The Washington Capitals open their last home stand of the regular season by hosting the Philadelphia Flyers for a two-game set on Friday and Saturday.  The Caps are coming off one of their most emotional games since winning the Stanley Cup in 2018, a 4-2 win over the New York Rangers than ran the gamut of feelings – dealing with a team seeking a measure of revenge over a team with a player – Tom Wilson – that they felt took liberties with their star player to comforting and ultimately celebrating a teammate – T.J. Oshie, whose father passed away on Tuesday and who scored a hat trick in his return to the ice against the Rangers on Thursday.

On the other side, the Flyers are left to contemplate a lost season, one which started with hopes of the playoffs, but that is ending as an also ran, a tea with a 12-19-4 record since March 1st.  The Flyer fade coincides with a similar fade in the production of forward Joel Farabee.  After going 8-13-21, plus-6 in 52 games as a rookie last season, Farabee started the season as a pleasant surprise, going 8-9-17, plus-7 in his first 18 games through the end of February.  Since March 1st, his scoring production is almost identical – 9-9-18 – but it covers almost twice as many games (34), and his minus-10 rating is one of nine that is minus-10 or worse for the Flyers since March 1st.  The overall comparison for Farabee from last season to this is easy, since he comes into this series having played in 52 games this season to date the same number he played last season.  His goals are up (from eight to 17), assists are up (from 13 to 18), points are up (from 21 to 35), and shooting percentage is up (from 9.9 percent to 14.8 percent, best on the team among players appearing in ten or more games).  But with the way his season is ending, like that of the Flyers, it has to be looked at with a bit of disappointment.  Farabee is 1-4-5, plus-4, in six games against the Caps this season, 1-4-5, plus-4 in eight games against Washington for his career.

Thirty points, minus-16.  Most points since March 1st, second-worst plus-minus rating among forwards.  That is Jakub Voracek’s history in 35 games since the beginning of March.  In that time, he was on the ice for 41 goals at even strength (second most among forwards), and his minus-11 goal differential at evens is tied for second-worst among Flyer forwards. What is more, his scoring has not really mattered all that much.  In 35 games since March 1st, Voracek has points in 20 games, and the Flyers are just 9-8-3 in those contests.  Then there is the matter of his overall scoring.  Since posting a career best 85 points in 2017-2018, his points have plateaued at a lower level.  In that 2017-2018 season he averaged 1.04 points per game, but in three seasons since that average dropped to 0.85, 0.81, and 0.86 points per game this season.  Voracek is 0-3-3, minus-8, in six games against the Caps this season (lowest point total against any opponent) and 15-22-37, plus-2, in 45 career games against Washington.

The Flyers have dressed 32 skaters this season, and ten of them are rookies.  None have played more than Samuel Morin, who has 18 games to his credit. That Morin is still considered a rookie has to be considered an achievement.  He played in nine games across four seasons for the Flyers before this season after being taken with the 11th overall pick in the 2013 Entry Draft.  His 27 games played to date in the NHL is the fewest among the top 20 picks in that draft (note: he was taken nine spots ahead of the Caps’ Anthony Mantha and 12 picks ahead of former Capital Andre Burakovsky).  Morin’s stock in trade is not scoring.  He has one point (a goal, which also happens to be a game-winner) in 27 career games in the NHL.  It is his physical play.  He ranks 11th in the league among all forwards playing in at least 15 games in hits per 60 minutes (10.26), and he ranks fourth in that group in penalty minutes (35 in 18 games).  He has been out of the lineup for the past three games.  Morin is 0-0-0, minus-2, in two games against the Caps this season, his career record against the Caps as well. 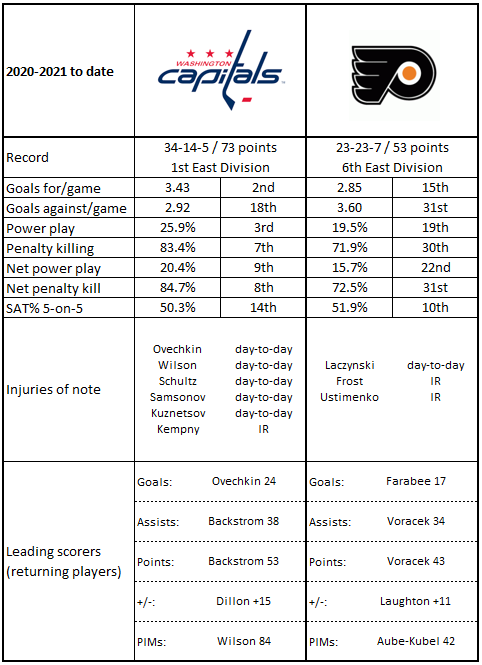 1.  The Flyers have the only two forwards in the league on ice for more than 40 goals at even strength since March 1st.  In addition to Voracek’s 41, there is Claude Giroux with 43.

2.  Since March 1st, the Flyers have the worst scoring defense on the road in the NHL (4.06 goals allowed per game).

4.  Over those same 18 road games, the Flyers have allowed three shorthanded goals, tied with four other teams (including the Caps) for most in the league over that span.

3.  On the other side, if the Caps allow one more shorthanded goal on home ice this season, they will tie for third-most shorthanded goals allowed at home since 2005-2006 (five) and will do it in 13 fewer home games.

4.  The Caps have drawn only 77 penalties on home ice this season, fifth-fewest in the league.

5.  If the Caps manage four power play goals in the two games against the Flyers, they would have 200 against Philadelphia in their all-time regular season series.

Goaltender Carter Hart is out for the rest of the season with a sprained knee.  With the Caps and Flyers playing back-to-back games on Friday and Saturday, it is highly likely the Caps will see Alex Lyon in goal for one of them.  A highly decorated goalie in the college ranks at Yale University (two-time Ken Dryden award as best goalie in the ECAC, first-team All-American, first-team All-ECAC, Ivy League rookie of the year, MVP for Yale), Lyon signed with the Flyers on an entry level contract in 2016.  Since then, he has bounced between the Flyers (21 games over four seasons) and the AHL (149 games with the Lehigh Valley Pantoms).  He has never appeared in more than 11 games in a season, that total coming in his first year in the NHL in 2017-2018. His career numbers since his entry into the NHL (6-7-1, 3.30, .888) do not suggest his future is as a permanent fixture in an NHL goaltending tandem, and at age 28, the clock is starting to tick louder on his career prospects.  He will be an unrestricted free agent at the end of this season, as will Brian Elliott.  With the possibility that those two depart, and with Hart’s future somewhat uncertain, given his injury and poor results this season (9-11-5, 3.67, .877, one shutout), the Flyers seem once more to have problems at the sport’s most important position.  Lyon is 0-1-0, 5.19, .875 in his only appearance against the Caps this season and 0-1-0, 4.56, .889 in two career appearances against Washington.

Fifty three games into the season, and Nic Dowd has a career high in goals scored (11).  It might surprise some, but as fourth line forwards go, Dowd has become a rather reliable goal scorer.  In 91 games with the Los Angeles Kings to start his career, he managed only six goals, a 5.4 goals per 82 game scoring rate.  In 40 games with Vancouver, he had three goals (6.2 per 82 games).  He scored a total of nine goals over his first three seasons in the league with a high of six in 2016-2017 with the Kings.  But in three seasons with the Caps, Dowd has 26 goals in 173 games (12.3 goals per 82 games)  and has not posted fewer than seven in any season.  Moreover, his shooting percentage has been noteworthy – 16.0 percent over his three years in Washington compared to 6.8 percent over his first three seasons.

Fans might remember that Dowd’s predecessor at center on the fourth line – Jay Beagle – was something of a good luck charm when scoring goals, the Caps going 41-1-5 in the 47 games with the Caps in which he scored at least one goal.  Dowd has done his best to assume that role this season, the Caps going 7-1-1 in the games in which he scored at least one goal, and three of his 11 goals have been game-winners, although he is looking for his first game-winner on home ice as he goes into this two-game set.  He goes into these games having scored goals in each of his last two games, including the game-winner in the Caps’ 4-2 win over the Rangers on Wednesday night.  Dowd is 3-0-3, plus-4, in six games against the Flyers this season and 3-3-6, plus-6, in 14 career games against Philadelphia.

The Caps control their own destiny with respect to the East Division.  Win out, and they with the division, regardless of what the Pittsburgh Penguins do.  They will be facing a Flyers team that just has not been able to solve their problems in the defensive end of the ice, which would seem tailor-made for the second-best offense in the league (3.43 goals per game).  There is enough on the plate to motivate the Caps to finish the season strong, starting with this two-game set against the Flyers.