“There is no God-given right to victory on the battlefield. You win that through the skill and the devotion, the valor and the ferocity of your troops.”

Hockey rinks are not fields of battle, but ferocity is not a characteristic unknown among a fair number of players at the highest level of competition.  It would be fair to say that Garnet Hathaway is among those NHL players who skate with a certain level of ferocity that makes life difficult for opponents.  For example, of 407 forwards this season who appeared in 25 or more games, Hathaway ranked 14th in credited hits per 60 minutes (15.56).  Of that same group of 407 forwards, he was tied for 33rd in penalties drawn (17) and 28th in penalties drawn per 60 minutes (1.48).  His net penalties per 60 minutes (minus-01.7) ranked 100th, a respectable ranking for a player who is not a star (and capable of drawing penalties while avoiding penalties of their own) and who plays with a feisty demeanor.  But Hathaway was not a one-dimensional player,  For the third consecutive season (one with Calgary, two with Washington) he posted more than 15 points, twice doing it in abbreviated seasons.  He finished 2020-2021 with 18 points in 56 games, only one point short of his career high – 19 points in 76 games with Calgary in 2018-2019. 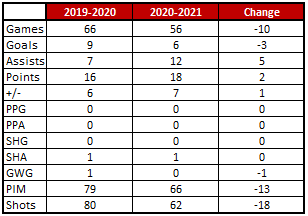 Cheerless’ Take… Does “feisty” translate into wins?  Well, maybe.  Maybe not.  Washington was 16-9-5 in 30 games in which Garnet Hathaway was credited with three or more hits, 20-6-0 when he was credited with two or fewer hits.  There is the arbitrary nature of what merits credit as a “hit,” and hits are evidence of chasing the puck, not possessing it, but that is still quite a disparity.  And, the Caps were 9-6-0 when Hathaway earned penalty minutes, 27-9-5 when his penalty column on the score sheet was clean.

Odd Hathaway Fact… Garnet Hathaway is the all-time leading scorer among NHL players born in Kennebunkport, ME.  Then again, he’s the only NHL player hailing from that town.

Odd Hathaway Fact II… Only twice in 56 games did Hathaway not record a credited hit (the Caps won both games).

They say of New York, “if you can make it there, you’ll make it anywhere.”  In Washington’s penultimate game at Madison Square Garden this season, Garnet Hathaway might not have “made it” in that sense, but it was his effort that might have allowed the Caps to salvage a win when things looked bleak.  The Caps opened the game on May 3rd with two goals less than two minutes apart to take a 2-0 lead, one of them assisted by Hathaway, but they then surrendered three goals to allow the Rangers to take a 3-2 lead 4:35 into the second period.

The Caps stopped the bleeding over the next 13 minutes, but it still seemed as if they would be in the hole going into the third period.  But then the fourth line took matters into their own hands.  Nic Dowd pried the puck free of a Ranger behind the New York net and fed Hathaway in the right wing circle.  Hathaway’s initial shot was turned aside, but he, Dowd, and Carl Hagelin crashed the net.  With several Rangers looking the other way as the puck squirted out into the low slot, Hathaway backhanded it through goalie Igor Shesterkin to tie the game 90 seconds before the second intermission.  The goal provided the needed momentum for the Caps to take the lead early in the third period and pull away with three goals in the last frame to skate off with a 6-3 win.

Game to Forget… April 8, 2021 vs. Boston.  It was not so much that either Hathaway or the Caps were awful in an early April game against Boston as much as it was just, well, forgettable.  The Bruins took a 3-0 lead in less than 25 minutes, withstood a pair of Caps power play goals scored 19 seconds apart to make the game close, and scored a power play goal of their own late in the third period to clinch a 4-2 win.  What made this game forgettable for Hathaway was that he was on ice for only 14 shifts and 8:11 in ice time (only 5:59 at even strength), his lowest ice time log in a Caps loss this season, but he did record a fighting major penalty and an unsportsmanlike conduct infraction.

Postseason… Garnet Hathaway was productive in the postseason, to a point.  He had two goals in the five-game opening series loss to Boston, tied for most on the team, but both came in Game 2, a 4-3 overtime loss.  He had an assist in Game 3, a 3-2 double-overtime loss.  Those two goals and an assists were his first postseason points as a Capital after going without a point in eight games (including the round robin) the 2020 postseason.

Looking ahead… Hathaway has two years left on a four-year/$6.0 million contract.  Among 18 forwards age 27-32 (Hathaway is 29) and cap hits of $1.25-$1.75 million, Hathaway ranks in the top third in offensive production (0.32 points per game played), even though he ranks in the bottom half in ice time.  As a bottom six player, he is not indispensable, but he does contribute in a variety of ways and plays with an edge that is not generally a feature of the Caps roster, unless one’s vision is clouded by visions of Tom Wilson, and one would rather have Wilson on the ice than in the penalty box.

Garnet Hathaway is what one might call “a good teammate.”  He’s tough, stands up for teammates, works hard on a night to night basis, and contributes as much or more than one might expect from a fourth liner.  That he plays with a certain level of ferocity endears him to fans and makes the Caps a more difficult team against which to play.  It might not get a lot of attention in media, but it is a combination of attributes that a lot of successful teams have and need.