The Peerless Prognosticator is ON THE AIR!!! -- Game 4: Capitals at Devils: October 21

The Washington Capitals take to the road for the first time this season when they head to Newark, New Jersey, to face the Devils at Prudential Center on Thursday night.

Did we mention the Caps would be facing the undefeated New Jersey Devils?  That’s right, the team that finished 19-30-7 last season, seventh in the East Division, is undefeated to start the 2021-2022 season.  Sure, it is only two games, and the wins have come against teams not expected to reach the postseason (Chicago Blackhawks and Seattle Kraken), but two wins are two wins.

The Devils have done it with balance on offense.  They have eight goals in two games, recorded by seven different skaters (Jack Hughes is the only one with two); 14 of the 20 skaters to dress so far have points.  They have also been stingy on defense.  Last season, the Devils posted their worst goals allowed per game (3.38) since the 2004-2005 lockout.  But they have allowed only five goals in their two games thus far (2.50 per game). 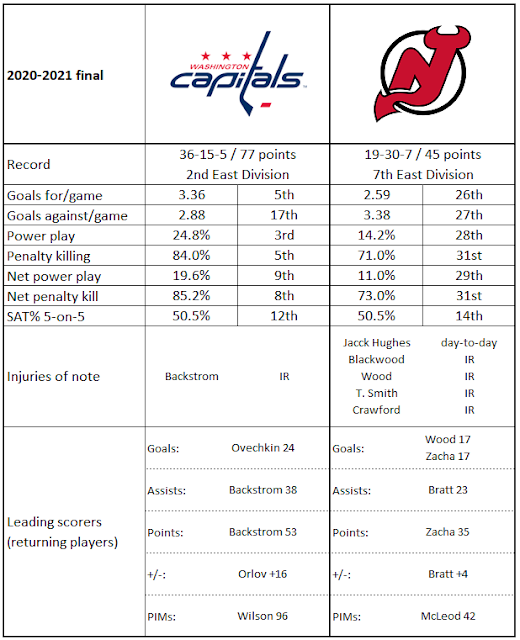 2.  The Devils have spent the third-highest amount of shorthanded ice time per game (8:05) and have allowed the third highest number of power play goals per game (1.50).

3.  New Jersey is one of six teams who have yet to allow a first period goal.

4.  The Devils have the fourth-worst net penalties (penalties drawn to penalties taken) per 60 minutes (minus-1.48) and are second in the league in major penalties (three; the Seattle Kraken have six).

3.  Last year it was scoring goals in the second period.  So far this season it is preventing opponents from getting them.  Only Ottawa has allowed fewer second period goals (none) than the Caps (one).

4. The Caps lead the Metropolitan Division in penalties drawn per 60 minutes (5.52).

5.  Washington has scored first in each of their three games to start the season.

He was the first goalie selected in the 2006 Entry Draft (11th overall by the Los Angeles Kings). He spent five seasons with the Kings, posting a respectable 29-20-6, 2.36, .912, six shutouts record with the Kings, but he was always second on the depth chart to Jonathan Quick and never played in more than 25 games with Los Angeles.  From there it was on to Toronto, where he got more number one minutes, but was just 59-68-17, 2.81, .915, with six shutouts on a more defense-challenged team than the one he backstopped in Los Angeles.  He spent three seasons with the Maple Leafs, but it really was the start of a journey with uneven results that had stops in Detroit (33-51-9, 3.02, .908, two shutouts), Anaheim (21-7-4, 2.50, .915, two shutouts), and Colorado (19-13-3, 2.85, .913, two shutouts).  He has been solid in his two appearances for the Devils thus far (2-0-0, 2.48, .911), which is a good thing for the team given that number one goalie Mackenzie Blackwood is on IR with a heel injury.  The problem with Bernier, though, has been his ability to take on a heavy workload, whether a product of performance or his position on the depth chart.  In 14 seasons, he played 30 or more games seven times and fewer than 30 seven times.  With Mackenzie Blackwood out for a spell with a heel injury, he will get his chance to be the workhorse for the Devils for the foreseeable future and will face a stiff test against the Caps. Bernier is 4-7-0, 3.20, .883 in 11 career appearances against Washington.

One expects that Nicklas Backstrom, when healthy, would lead the team in assists.  One knows that Evgeny Kuznetsov possesses the vision, the stick skills, and the look-pass-first mentality to match Backstrom assist for assist.  What one does not expect is that the NHL’s joueur terrible, Tom Wilson, to be tied at the top of the assist category for the Caps at any point of the season.  But there hockey’s bad boy sits, with four assists in three games, tied with Kuznetsov (his two primary assists are also tied with Kuznetsov for the team lead). His points per 60 minutes at 5-on-5 (4.76) also leads the team, and his plus-5 rating also leads the Caps.  Wilson also leads the team in on-ice even strength goal differential (plus-5), on ice for five goals for an no goals against.  What this means is that Wilson has gone about being effective without being loud about it – no goals on three shots on goal, two minor penalties.  Not that he has forsaken the physical side entirely, his 9.40 hits per 60 minutes leading all skaters for the Caps.  Wilson continues to show a more nuanced game, contributing in ways more subtle than goals or even fights, the sort of well-rounded game that can prove successful for the Caps on any given night.  Wilson is 4-13-17, plus-16, in 33 career games against New Jersey.

The Devils might be feeling a bit fat and happy over the start of their season, but with key elements injured (Jack Hughes is day-to-day, Mackenzie Blackwood, Miles Wood, and Ty Smith are on injured reserve) and the Devils moving up in weight class in opponent, things could take a turn.  For the Caps, who have already faced three different tests from three very different teams, a fourth test is on the plate – their first road game of the season, facing an opponent it would be easy to underestimate.  But being a veteran team, the Caps have faced such tests often and should be able to do so once more.