The Peerless Prognosticator is ON THE AIR!!! -- Game 14: Capitals at Blue Jackets: November 12

The Washington Capitals complete their back-to-back set of games for this week when they visit the Columbus Blue Jackets and their infernal goal cannon at Nationwide Arena on Friday night.  Columbus goes into the game on a three-game winning streak, their longest of the season to date.  Two of the three games took extra time, and the third featured a late empty net goal for the Jackets in what would be a 4-2 win over the Colorado Avalanche.

Columbus has never been what one would call an “elite” scoring team, but this year’s squad is averaging 3.10 goals per game, second-best in franchise history (3.12 goals per game in 2018-2019).  No Blue Jacket has ever topped 300 goals with the franchise, and only two players have ever topped 200 goals (Rick Nash: 289; Cam Atkinson: 213).  The active leader among Columbus players in career goals with the franchise is Boone Jenner (127).  Jenner has been earnestly adding to his career total, leading the team in goals this season (six).  Jenner made a statement in 2015-2016 when he recorded 30 goals in 82 games, becoming at the time just the sixth player in Blue Jackets history to have at least one 30-goal season.  Since then, however, he has become a somewhat reliable secondary scorer, but he has not recorded as many as 20 goals in any of the five seasons since that 30-goal season.  Last season he finished with a career low eight goals in 41 games, but he missed 15 games at the end of the regular season to a broken finger.  Jenner has six goals in ten games so far this season.  No player in the league so far this season has more goals with only one assist.  He and Minnesota’s Ryan Hartman are 6-1-7.  Jenner is 1-6-7, minus-7, in 26 career games against Washington.

Seth Jones is gone, manning the blue line for the Chicago Blackhawks.  And that means Zack Werenski is the player who will bear the broadest responsibility for the Blue Jackets’ defense.  Now in his sixth season in Columbus, Werenski is already seventh all-time in games played in team history (345) and culd pass Jones (381) for fifth place on that list this season.  He is the all-time leader in goals scored by a Columbus defenseman, and by a wide margin (67, to 50 for Jones).  He is third in assists (128) and second in points (195).  Only Jones has more game-winning goals (12) and overtime goals (eight) than Werenski (ten and five).  And this season he is getting ample opportunity to climb those lists.  He lead the team’s defensemen in points (six), power play points (two, the only two power play points for Columbus defensemen), shots (35, almost three times as many as Jake Bean (13)), total ice time per game (26:11, fifth in the league), power play ice time per game (3:27), and he is third in shorthanded ice time per game (2:34).  On the other hand, he has a minus-2 goal differential at even strength (seventh of nine defensemen to dress for Columbus this season), and he has been on ice for ten goals against at evens, most on the team, which might not be that surprising given the ice time he consumes.  Werenski is 2-3-5, minus-1, in 14 career games against the Capitals. 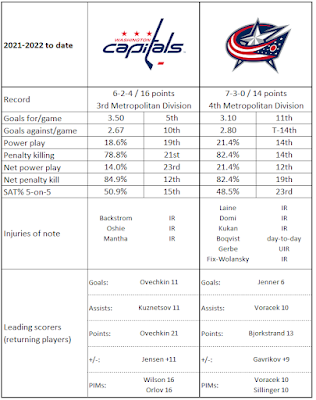 1.  Columbus has allowed only 17 goals at 5-on-5, tied with Vancouver and the New York Islanders for  fourth-fewest in the league.

2.  Only Vancouver has scored fewer first period goals (five) than the Blue Jackets (six, tied with Tampa Bay and Arizona).

4. Only the new York Islanders and Pittsburgh Penguins have fewer penalty minutes (73 and 72, respectively) than the Blue Jackets (86, tied with Buffalo).

5.  Columbus has scored first only three times in ten games, winning each of them.

4.  The Capitals have been outshot in games only twice in 12 games and have a 1-0-1 record in those games.

5.  The Caps are still the only team in the league that has not taken a major penalty this season.

November has been kind to Cole Sillinger. Yes, the Blue Jackets have played only twice so far this month, but Sillinger is 3-1-4, his three goals and four points, leading the team in both categories, and one of the goals a game-winner, that coming in s 4-2 win over Colorado last Saturday.  Sillinger was taken 12th overall in last July’s entry draft, and he is one of only three skaters of this draft class to have dressed for an NHL game this season, leading the trio with ten games played.  He might be the goal scorer the Blue Jackets have lacked, based on his amateur hockey numbers.  In 52 games with Medicine Hat in the WHL, he was 22-33-55, and last season with Sioux Falls in the USHL he was 24-22-46 in 31 games.  His four goals to date ranks fourth in this year’s rookie class, and his six points are tied for seventh.  Sillinger has not faced the Caps yet in his career.

There is no major award for top rookie defenseman, but if there was, Martin Fehervary might be a finalist, based on his early numbers.  He is tied for sixth in points by a rookie defenseman (two), tied for 12th in plus-minus rating (even), tied for fifth in shots on goal (12), first in credited hits (33), tied for second in blocked shots (22), tied for eighth in takeaways (two), third in on-ice even strength goals for (nine), seventh in overall ice time per game (18:34), and third in shorthanded ice time per game (1:49).  He has shown no butterflies skating with John Carlson on the top defensive pairing, although of some concern is his 0-0-0, minus-5 rating in his last six games while averaging 18:05 in ice time per game after going 1-1-2, plus-5, averaging 19:02 in ice time over his first six games this season.  Of note, the Caps are 4-0-1 when he skated at least 19:11 in ice time, 2-2-3 when he skated less time.  Fehervary has never face Columbus.

This is the first test of the season for the Caps skating the second game of a back-to-back.  It will be a test of focus and endurance after facing a speedy Detroit team on Thursday night.  Simplifying the game – the usual strategy for teams on the road – could be especially important.  Columbus is not the kind of team that gets into many high scoring, end-to-end matchups, so this opponent might make the Caps’ job of keeping things simple just a bit easier.