The Peerless Prognosticator is ON THE AIR!!! -- Game 20: Canadiens at Capitals: November 24

It is Thanksgiving Week, and that means Washington Capitals hockey at Capital One Arena.  The Caps kick off their pre and post Thanksgiving set of games with a matchup against the Montreal Canadiens on Wednesday night.  The Caps, smarting from a 5-2 loss to the Seattle Kraken to close their four-game west coast road trip, return home for their first game at Capital One in ten days.

Meanwhile, the Canadiens are hitting the road after splitting a two-game home stand.  To say the road has been unkind to the Habs is an understatement.  Montreal comes to Washington tied for the fewest points earned on the road (three, with Ottawa and Seattle) and lowest road points percentage in the league(.167) with their 1-7-1 record.  What’s more, the Canadiens come to Washington a depleted team with nine players on their injured list and seven of them on injured reserve.

There is no mystery about the Canadiens’ poor road record.  They can’t score (1.89 goals per game/31st in the league), and they can’t keep other teams from scoring (3.56 goals allowed per game/22nd).  The anemic offense reflects a lack of volume production despite a certain amount of balance in goal scoring.  Twelve skaters have recorded goals on the road, but nine of them have a single goal to their record.  Mike Hoffman and Josh Anderson lead the team in road goals with three apiece.

With Hoffman out for the three-game road trip Montreal will begin in DC with an upper-body injury,  Anderson is left as the leading road goal scorer.  Anderson is in his second season with the Canadiens, working on a seven-year contract paying him $38.5 million over its term.  Anderson was Montreal’s second leading goal scorer last season with 17 in 52 games, but this year his production has dropped off – four goals in 20 games overall – and he is in a slump that sees him with one goal and two assists with a minus-9 rating over his last nine games.  His minus-12 rating to date is already his worst career number in that category.  Anderson is 0-1-1, minus-5, in 16 career games against the Capitals. That zero in goals scored against Washington comes on 41 shots on goal, the third highest number he has against any opponent (he has seven goals on 50 shots against Ottawa and eight goals on 72 shots against Toronto).

Defenseman Ben Chiarot is on a pace to set a career best in goals scored this season.  Granted, he has never cracked the ten-goal threshold in his eight seasons before this one (his career high is nine with Montreal in 69 games in 2019-2020), but his four goals in 20 games is more than the rest of the Montreal defense combined (Chris Wideman has two, and Alexander Romanov has one).  Montreal has had more success in Chiarot’s four games with a goal (2-1-1) than they have had Tyler Toffoli’s four games with a goal (we will get to that below), but with Chiarot, ice time is the thing.  Montreal is 4-6-0 in games in which he skated less than 23 minutes, but they are just 1-7-2 when he skated more than 23 minutes.  Chiarot is 3-3-6, plus-3, in 11 career games against Washington. 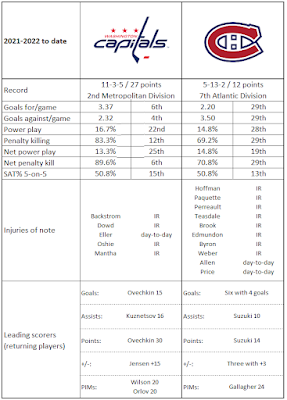 3.  Montreal has nine losses by three or more goals, most in the league.

4.  The Canadiens are one of two teams (the New York Islanders are the other) without a one-goal win this season.

5.  If faceoff volumes are an indicator of game flow and pace, Montreal seems to play in quicksand. The 1,133 faceoffs they have taken are most in the league. But practice hasn’t made perfect.  Their 48.0 winning percentage ranks 25th in the league.

1.  This will be the first instance this season in which the Caps had three days between games.

2.  The Caps like wrist shots.  Their 39 goals on wristers lead the league.  Their 11.4 percent shooting on wrist shots is third in the league.

3.  Sixteen of 22 skaters to dress for the Caps on home ice have goals.  The surprises who do not?  Lars Eller and Dmitry Orlov.

5.  Garnet Hathaway defends the house from evil doers.  His 13.48 credited hits per 60 minutes at home lead the team by a comfortable margin (Nic Dowd: 7.77 among players appearing in more than two home games).

Tyler Toffoli was Montreal’s leading goal scorer last season with 28 tallies in 52 games, but this season he has four in 20 games, a 16-goal pace over a full season.  His shooting efficient has fallen off a cliff, his 7.7 shooting percentage a full ten points lower than what he posted last season (17.7).  It is out of character for Toffoli, who has been a ten percent or better shooter in each of his three stops in the NHL (10.2 with Los Angeles, 15.8 with Vancouver, and 15.2 to date with Montreal).  Part of the problem for Toffoli might be in shot selection, or more to the point, getting shots on goal.  He is averaging just 2.60 shots per game, the third-lowest average of his career and quite a drop from the 3.04 shots per game he posted with the Canadiens last season, the second-highest average of his career.  Toffoli has had a pair of six-game streaks without a goal this season, the most recent one snapped when he potted an empty netter in Montreal’s 6-3 win over Nashville last Saturday.  His last goal against a goaltender was on November 6th in a 5-2 loss to the Vegas Golden Knights.  But perhaps the strangest fact in Toffoli’s goal scoring this season is that the Canadiens are 1-3-0 in games in which he scored a goal.  They were 14-4-4 in games in which he scored a goal last season.  Toffoli is 2-5-7, even, in 14 career games against the Caps.

In some respects, Justin Schultz is a “was” defenseman.  He “was” a decent goal scorer once upon a time, but he hasn’t topped ten goals since 2016-2017 (he has two ten-plus goal seasons in his career); he hasn’t had more than five goals since that same season (he has four in his career).  He has three 30-plus point seasons, but none since 2016-20187 (51). He had 27 points last season, but that was his first 20-plus point season since 2017-2018 (27 points with Pittsburgh).  He had ten power play goals in his first five seasons, but he has two in his last five seasons, including this one.  He averaged more than 20 minutes in ice time five times in his career, but in no season since 2018-2019 (20:30).  Part of the problem is he is a right-handed defenseman stuck behind John Carlson on the depth chart, but even with that, Schultz has one goal and one assist in 19 games so far this season, the two points being the fewest among the six defensemen to suit up for more than two games so far this season for the Caps.  The goal he has was a game-winner, but there is a “was” quality to that, too.  It came on a power play on Opening Night in the Caps’ 5-1 win over the New York Rangers.  Schultz is 0-2-2, minus-1, in 16 career games against Montreal.

No NHL team should be taken lightly, and that means the Caps need to pay particular attention to detail and effort.  They will be facing a team beaten up by injuries, including both goaltenders – Jake Allen and Carey Price – listed as “day-to-day” with injuries, and their road schedule in which they have not scored more than two goals in more than a month (a 4-0 win in San Jose against the Sharks on October 28th).  Early and persistent pressure will be key for the Caps to take the Canadiens out of the game, but in this league, you cannot sit on leads, either.  “60-minute” effort is not just a buzz term, it is essential for success, even against struggling teams.

Programming note… we will be off for a few days and will resume posting this weekend.  In the meantime… GO CAPS!!!