The Peerless Prognosticator is ON THE AIR!!! -- Game 12: Sabres at Capitals: November 8

The Washington Capitals will seek to put last week’s 0-2-1 record behind them as the open the new week against the Buffalo Sabres on Monday night at Capital One Arena.  The Caps will be facing a team with troubles of their own, the Sabres coming to DC dragging a four-game losing streak (0-3-1) in their wake.  It has been a lack of defense that has done in the Sabres, who have allowed 17 goals in the four-game skid.

The goaltending numbers over those four losses for the Sabres are rather ghastly.  Dustin Tokarski is 0-2-1, 3.65, .894, and he is the better of the two goalies in this stretch.  Former Capital Craig Anderson was involved in but one of the four games, but he allowed five goals on 22 shots in a 5-3 loss to the San Jose Sharks last Tuesday.  Their performances did not reflect their seasons to date, which have been impressive for both, given the state of the Sabres overall.  Tokarski goes into Monday’s game with a record of 1-2-2, 2.72, .915, while Anderson is 4-2-0, 2.50, .921 .

When Kyle Okposo was drafted seventh overall by the New York Islanders, he seemed to have a fine career as a power forward ahead of him.  But then came the injuries – arm, groin, H1N1 virus, shoulder, lower body, upper body, knee, rib, concussions (three of them), cheekbone.  The injuries took their toll, and instead of becoming a consistent 25-35 goal scorer, he topped 25 goals only once (27 goals with the Islanders in 2013-2014).  He has not hit the 20-goal mark since 2015-2016, when he posted 22 with the Islanders.  That was his last year on Long Island before arriving in Buffalo as a free agent in July 2016.  Since moving upstate, though, his production has been in steady decline, finally settling with two goals and 13 points in 35 games last season with the Sabres.  Okposo has already eclipsed last year’s goal total, recording three in 11 games so far.  Of immediate concern, though, is that in the four-game winless streak, Okposo has not been on ice for a single goal for the Sabres at even strength, while he has been on ice for six goals scored against the Sabres.  Okposo is 11-11-22, plus-1, in 40 career games against the Caps.

Buffalo has had timely contributions on offense from the defense, mostly in terms of setting up others to score.  All six defensemen having appeared in more than one game have points, but only two – Rasmus Dahlin and Robert Hagg – have goals.  Dahlin, drafted number one overall in the 2018 Entry Draft with the expectation that he would develop into a franchise defenseman, seems to have hit a wall.  After going 13-71-84, minus-20, in 141 games over his first two seasons, he was 5-18-23, minus-36 last season, that minus-36 finishing dead last among 913 skaters in plus-minus rating.  Only two players were on ice for more even strength goals against that Dahlin (62) – Brent Burns with 69 and Quinn Hughes with 64.  He is minus-7 in his last eight games after posting a plus-3 rating in his first three games.  Dahlin is tied for the team lead in points among defensemen (1-5-6), half of his points coming on power plays.  He also leads the defense in ice time (22:57 pr game), shots on goal (20), and penalty minutes (12), takeaways (six, tied with Mark Pysyk).  Dahlin is 2-6-8, minus-11, in 13 career games against the Caps. 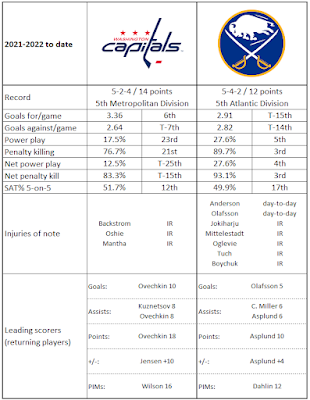 1.  Every Sabre who has played more than one game has at least one point.

2.  Buffalo has the third-worst shot differential per game on the road (minus-9.6 shots per game).

3.  The Sabres have allowed more goals at 4-on-4 on the road (three) than any other team.

4.  Buffalo has one third period goal scored on the road this season, the third and final goal in a 5-3 loss to San Jose on November 2nd.

1.  Evgeny Kuznetsov is the all-time rating leader for the Caps against Buffalo (plus-15).

2.  Tom Wilson is the only active Capital with a shorthanded goal against Buffalo in his career.

3.  With one penalty minute, Alex Ovechkin would break a tie with Brendan Witt for second-most penalty minutes against the Sabres in team history (both have 69 PIMs).

4.  Only three Capitals have taken penalty shots against the Sabres in the all-time series – Tommy Williams, Jason Chimera, and Alex Ovechkin.  Chimera is the only one of the three to score a goal.

5.  If Vitek Vanecek gets the call and plays 60 minutes, he will pass Philipp Grubauer for fifth place in all-time minutes played by a Caps goalie against Buffalo.

Anyone have Rasmus Asplund as the Sabres’ leading scorer 11 games into the season?  Well, there he is, the only Sabre with double digits in points to date (4-6-10).  And, he comes into this game on a roll, sporting a six-game points streak (3-5-8, plus-4), one of his three goals being the game-winner in a 4-3 overtime win over the Anaheim Ducks on October 28th.  Asplund was a second round pick (33rd overall) in the 2016 Entry Draft.  He reached the NHL in 2019-2020, but he played in only 57 games over the past two seasons before this one, posting a modest scoring line of 8-6-14, minus-3.  He has points in eight of 11 games so far, and he has done well with more ice time, posting at least one point in all five games in which he skated more than 17:30 (although the Sabres are 2-3-0 in those games).  He is not an especially physical player, at least this season, recording four hits, three blocked shots, and four penalty minutes in his 11 games to date.  Asplund is 0-2-2, plus-2, in three career games against Washington.

It has not been an easy start to the season for Carl Hagelin.  In 11 games to date, he has no goals on 15 shots, one assist, eight penalty minutes, and an even rating.  He goes into Monday’s game on an eight-game pointless streak with a minus-1 rating and 13:07 in average ice time.  He has seven credited hits in that span and two blocked shots (none in his last seven games).  Hagelin had a glorious chance on a breakaway against Philadelphia in the Caps’ most recent contest, but he caught the puck on the heel of his stick and did not get a good shot on goal.  Shooting has always been an issue for Hagelin, but it has become more pronounced in recent years.  Since 2016-2017, 280 forwards have dressed for 250 or more games.  Hagelin ranks 278th – third worst – in shooting percentage (5.8 percent), only Sean Kuraly (5.1 percent) and Joakim Nordstrom (5.3 percent) being worse.  Of 117 forwards to dress for at least 100 games as a Capital, Hagelin ranks 106th in shooting percentage (7.0 percent).  Hagelin is 7-4-11, plus-10, in 32 career games against the Caps.

This will be a battle of teams that have earned one standings point apiece over their last four games.  The Caps posted that record largely as a result of injuries to key players and some iffy goaltending.  The Sabres posted their record as a result of not being a consistently competitive team at this stage of their development.  Washington needs to avoid playing down to their competition, score early, put the Sabres in their place, and snap their sleepwalking of the last four games, especially early in games.  If the Caps do not get off to a quick start and let the Sabres hang around, that one-goal loss thing starts to loom larger, and that is something the Caps need to solve and solve quickly.  Play 60 minutes, and the Caps win.  Don’t, and they probably won’t.