The Peerless Prognosticator is ON THE AIR!!! -- Game 27: Penguins at Capitals: December 10th

Game 2.  No, it is not the postseason, but when the Washington Capitals and Pittsburgh Penguins meet, as they will on Friday night in Washington, it has just that feel to it.  The Caps laid waste to the Pens in their first meeting, a 6-1 win in Washington that featured goals by six different Capitals, six multi-point games, and a 24-save effort from goalie Vitek Vanecek.  The Caps come into this game on a three-game points streak and are 11-2-2 since November 8th.  Pittsburgh has won two in a row and are 7-2-1 in their last ten games.

Pittsburgh has been decimated by injuries; only seven of 24 skaters to dress for the team this season have appeared in all 25 games to date.  The thing is, though, even though that list does not include the names “Crosby (13 games),” “Malkin (no games),” “Rust (12 games),” or “Guentzel (24 games),” the no-names have contributed.  None more on offense than Evan Rodrigues, who is 8-10-18, plus-5, in his 25 games.  Rodrigues is already within a goal of his career high for a season (nine with Buffalo in 2018-2019), is half-way to his career high in assists (20 in 2018-2019, in three times the games played), and is a plus rating player for only the second time in his seven-year career.  He has the best goal differential, on ice, at even strength among forwards (plus-5).  His goal scoring has cooled off of late, though, with just two on 43 shots over his last dozen games.  He does not have a goal on the road in his last nine games.  Rodrigues is 1-3-4, minus-4, in 10 career games against Washington.

When Jeff Carter was traded by the Los Angeles Kings to Pittsburgh last April, one wondered, based on the price of the trade and the fact that he was 36 years old with more than 16 years and more than 1,000 games in the bank, if he had much left in the tank.  His role was pared back, essentially to being a third line center with some goal-scoring punch, and he has thrived in that role somewhere between being a primary scorer and being a secondary scorer.  In 36 games since his arrival in Pittsburgh, Carter is 16-9-27, plus-9, a 36-21-57, plus-16 scoring line per 82 games, better than his 27-27-54, minus-1, scoring line per 82 games in nine-plus seasons with the Kings.  His first full season with the Pens is something of a dropoff in offensive production – 7-7-14, minus-2, in 22 games, and his 9.9 shooting percentage is on the low end of his career performance (he has three seasons with worse percentages for a full season).  Carter had been on a slump in road scoring with just one goal in nine games after posting three in his first three road games of the season, but he broke out of that with a pair of goals in Pittsburgh’s 6-1 win over Seattle on Monday.  Carter is 16-16-32, plus-2, I 37 career games against the Caps.

John Marino is the only one of nine defensemen to appear for Pittsburgh dress for all 25 games this season.  He has been reasonably effective in the offensive end (1-10-11 in 25 games), but he has had issues, either directly or indirectly, in the defensive end.  His minus-4 rating is worst among Penguin defensemen, and his minus-2 goal differential, on ice, at even strength is tied for worst on the club among defensemen.  On the defensive side of the puck, Marino leads the team’s defense in shorthanded time on ice per game (2:31).  Perhaps unsurprisingly, given that ice time load, he has been on ice for 2.86 power play goals against per 60 minutes, most among any defensemen appearing in at least a dozen games.  Marino is without a goal in his last 21 games (0-7-7) and has a minus-10 rating over that span.  Marino is 0-4-4, minus-1, in 11 career games against the Capitals. 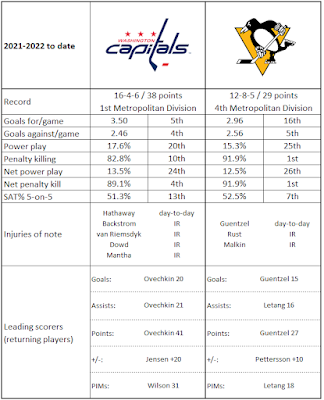 1.  Since November 18th, when the Penguins began their 7-2-1 run, only Tampa Bay and Minnesota have more standings points earned (17 apiece) than the Pens (15, tied with Toronto and Colorado).

4.  Pittsburgh has allowed the third-fewest shots on goal against on the road this season (28.2 per game).

5.  The Pens are one of four teams with two Gimmick losses on the road this season (Florida, St. Louis, and Anaheim are the others).

1.  Since November 8th, when the Caps started their current 11-2-2 run, they have the best record in the league, by standings points (24 points) and are third in points percentage (.800).

2.  The Caps’ 1.27 goal differential per game is fourth in the league over that same 15-game span.

3.  Washington’s net penalty kill (net of shorthanded goals scored) of 94.1 percent is third-best in the league over their last 15 games.

There have been 223 defensemen to play for the Pittsburgh Penguins.  None of them have more goals scored than Kris Letang, with 133 over his 16 seasons, all with the Penguins.  He has but one goal through 21 games so far this season.  Goal scoring among Penguin defensemen has been a weakness this year, four blueliners tied for the team lead with one apiece.  Letang being in that group is something of a surprise.  As recently as 2019-2020 he had 15 goals in 61 games.  However, so far this season Letang has one goal on 54 shots, a 1.9 shooting percentage, second-lowest of his career (1.7 percent in 2009-2010).  It is not for lack of shooting.  He is averaging 2.57 shots on goal per game, 16th among 211 defensemen this season to play in at least ten games, and he has three or more shots on goal in ten of the 21 games in which he played.  He has been productive in dishing puck, though, recording a total of 16 assists in 21 games to date and posting at least one in 12 games in which he played so far.  Odd Letang fact… four defensemen have recorded a total of 29 goals in the Gimmick.  Letang has 26 of them, and only Sidney Crosby has more game-deciding goals all time (18) than Letang (15) in the freestyle competition.  Letang is 7-21-28, minus-26 (worst by far against any team he faced), in 49 career games against Washington.

Alex Ovechkin owns just about every scoring record against the Penguins or is close to the top spot (he needs a hat trick on Friday to tie Mike Gartner for most goals all-time by a Capital against the Pens, for example (39)).  But T.J. Oshie, despite having played only 28 career games against Pittsburgh as a Capital, is next in line among active Caps with 15 goals scored against the Penguins. He has goals in 12 of the 28 games he skated against Pittsburgh and has points in 16 of those 28 games.  And when Oshie lights the red light against the Pens, chances are good the Caps will win.  They are 9-0-3 in the 12 games in which he had at least one goal; four times he had the game-winning goal.  Oshie returned to the lineup from injury last Saturday and has one assist in the two games he played since his return.  He does not have a goal in four games since he had a hat trick against Ottawa on October 25th.  And, he has only one goal on home ice this season, that scored on Opening Night against the New York Rangers.  If there is a team against which Oshie could break out, it could be the Penguins, against whom he is 16-18-34, plus-16, in 37 career games.

In this matchup, one team finds itself in a familiar spot, the other in one in which they have little experience in recent years.  The Capitals sit atop the Metropolitan Division, which they have won in the last five years of divisional play (divisions were suspended for the 2020-2021 season).  As for the Penguins, they sit in fourth place in the division hanging on to fourth place by three points over Columbus (which holds a game in hand) and four over New Jersey (also with a game in hand).  A subplot to this game is that while the Caps have a 9-1-4 record on home ice so far, one of two teams with a single loss in regulation (Florida is the other), Pittsburgh has a better record on the road (7-3-3) than they do at home (5-5-2).  There will be – or should be – no lack of intensity in this game, given the history between these teams.  And the Caps, as we know, are always intense…