The Peerless Prognosticator is ON THE AIR!!! -- Game 49: Capitals at Canadiens, February 10th

The Washington Capitals have reached the point in their 2022 slump where a question must be asked.  Are the Caps a good team playing poorly due to circumstance (most notably, injuries)?  Or, are they a mediocre team playing badly because their flaws have been exposed?  There are subsets of questions that might be asked (are they being coached poorly, or do they have poor coaches?  Are their personnel sufficient in number and talent, when healthy, to contend for title, or they too thin and too lacking in talent up and down the lineup to contend?), but it comes down the matter of whether the Caps are, in fact, good or just an also-ran who might make the playoffs but not cause a ripple.

The Caps will get an indicator of sorts on these matters when they head north to Bell Centre to face the Montreal Canadiens on Thursday night.  If the Caps have played poorly (or just had poor results over the last six weeks, the Canadiens have had it far worse.  They are the only team yet to reach the double-digit mark in wins (8-30-7), and they have little mystery when it comes to having the league’s worst record.  Montreal is 31st in scoring offense (2.20 goals per game) and last in scoring defense (3.98 goals allowed per game). Their power play ranks 31st (13.6 percent), and their penalty kill ranks 30th (73.0 percent).  Their special teams index – power play plus penalty kill percentages – ranks 31st (86.6).  Their shots on goal differential (minus-5.6) ranks 29th in the league.

On offense, no Canadien has as many as ten goals.  Three skaters – Nick Suzuki, Josh Anderson, and Tyler Toffoli – have nine apiece.  None are home grown players, Toffoli signed out of Vancouver as a free agent in October 2020, the other two obtained in trade – Anderson from Columbus for a 2020 third-round draft pick and Max Domi, Suzuki from Vegas with 2019 second-round draft pick in 2019 and Tomas Tatar Max Pacioretty.

Anderson is no stranger to Capitals fans after spending his first six NHL seasons with the Columbus Blue Jackets.  After posting 65 goals and 15 points in 267 games with the Blue Jackets (only one of those points – an assist – in 16 games against the Caps), he has been with the Canadiens last season and this, going 26-14-40 in 86 games (no points in one game against Washington).  What sticks out, though, is a minus-29 rating in his season and a half with the Habs, second-worst on the team in that span.  It would be tempting to compare Anderson to the Caps’ Tom Wilson.  They are of similar size (Anderson is 6’3”/226; Wilson is 6/4”/220) and disposition as power forwards (Anderson has 223 credited hits in his season and a half in Montreal; Wilson has 236 in the same span), and both players were taken in the 2012 Entry Draft, although Anderson was a fourth-round pick (95th overall), while Wilson was a first-rounder for Washington (16th overall).  The comparison ends, though, with offensive production.  While Wilson is 105-148-253 in 613 career games, Anderson is 91-64-155 in 353 games.  On a per-82 game basis, both players have similar total points (Anderson: 36; Wilson: 34), but how they get there is different, Anderson being more the goal scorer (21 goals per 82 games; Wilson with 14).  But Anderson has not achieved what might have been expected of him after a 27-goal season in 2018-2019 with Columbus.  He has just 27 goals in 112 games over two and a half seasons since.  Wilson has established himself as an up-and-comer when it comes to goal scoring, posting 84 goals in 300 games (a 23 goals per 82 game pace) over the last four and a half seasons.  Anderson is just 2-1-3, minus-9, in his last 11 games.  He is 0-1-1, minus-7, in 17 career games against the Caps.

Montreal, a team that boasts the likes of Ken Dryden, Patrick Roy, George Vezina, George Hainsworth, and Jacques Plante among its goaltenders in franchise history, not to mention Carey Price – the all-time leader in wins in franchise history (360) – has had its struggles in goal this season.  Montreal has used four goalies so far this season, Jake Allen getting most of the work (24 starts in 45 games).  But he and Price are both on the shelf, Price not yet having played a game this season after knee surgery in July, and Allen on IR with a lower body injury.

The absences could leave Sam Montembeault getting the call on Thursday.  Claimed off waivers last October from Florida, he is second on the team with 13 starts in his first season with the Canadiens and has struggled, going 2-8-4, 4.10, .891 in 19 appearances (13 starts).  That his record is that good is something of an accomplishment given the support – or absence of it – in front of him.  He has faced 37.6 shots per 60 minutes so far this season.  None of the 50 goalies in the league to log at least 750 minutes have faced more rubber per 60 minutes (37.6), and it isn’t really close (Martin Jones is second with 35.9 shots faced per 60 minutes).  It has even been worse since the new calendar year started.  Montembeault is 1-3-2, 4.43, .889 in nine appearances, and he has faced a whopping 39.8 shots per 60 minutes in that span.  He has just one win on home ice this season and has a 4.85 goals against average with a .844 save percentage in six games at Bell Centre.  Montembeault has never faced the Caps. 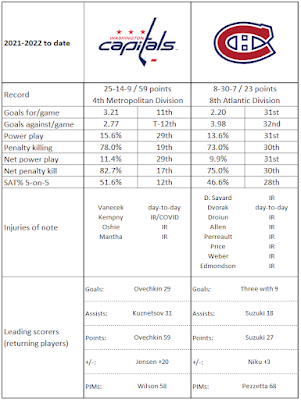 1.  At no point this season, from their 2-1 Opening Night loss to Toronto, to their 7-1 loss to New Jersey on Tuesday in Game 45 of their schedule, has Mnntreal been as much as a .500 team this season.

2.  The Caps have had trouble scoring on the road since January 1st (2.83 goals per game/20th in the league), but their scoring defense (2.33 goals allowed per game) ranks fourth-best in the league.

3.  While the Caps’ power plays look like monkeys trying to romance a football lately, their road power play is tied for tenth-best in the league since January 1st (22.2 percent).

4.  On the other hand, the Caps’ 70.6 percent penalty kill on the road in the new year ranks is tied with Edmonton for 23rd place in the league over that span.

By the time you read this, Tyler Toffoli might be an ex-Canadien.  He is hardly the top-shelf, top-six scoring forward team might dream about (9-16-25, minus-4, in 34 games this season), but he is the type of third line, two way forward with experience (10 years, 611 regular season and 76 playoff games) that teams will fine useful for a stretch run and the postseason.  In seven seasons preceding this one, Toffoli had five 20-plus goal seasons, five 40-plus point seasons.

Toffoli was rated as a “medium” bet to be moved at or before the trading deadline by one outlet and has been linked to Calgary, Boston, the New York Rangers, and possibly others. On the other hand, he has a $4.25 million annualized salary cap hit and has two more years on his current contract. https://www.capfriendly.com/players/tyler-toffoli   And, he seems to want to stay in Montreal (as does Josh Anderson, covered above).   He has boosted his trade value recently, going 6-10-16, plus-4, in his last 15 games, five of which have been multi-point games.  In his last nine home games, Toffoli is 3-6-9, minus-2.  He has six of his nine goals and 15 of his 25 points at Bell Centre this season.  Toffoli is 2-5-7, even, in 15 career games against Washington.

After playing his rookie NHL season with the St. Louis Blues, Lars Eller was traded in June 2010 by the Blues with Ian Schultz to the Montreal Canadiens goalie for Jaroslav Halak.  He spent the next six seasons with the Canadiens, going 71-83-154, minus-35, before he was traded to the Caps in June 2016 for a second-round draft pick in 2017 and a second-round draft pick in 2018. Montreal selected Joni Ikonen with the 2017 second rounder they received and traded the 2018 pick to Edmonton for a third round pick (Jordan Harris) and a fifth-round pick (Samuel Houde). Ikonen has not played in North America, Harris just completed his career at Northeastern University, Houde did not sign with Montreal and is currently playing in the AHL with the Wilkes-Barre/Scranton Penguins.  We will leave it to you to decide who won that trade with Montreal in 2016.

While Eller has had a fine career in Washington (75-107-182, plus-11, in 397 career regular season games), including the only Stanley Cup game-winning, series clinching goal in team history, he might be showing some wear and tear at age 32 and with 839 regular season on his career ledger.  In 2019-2020, Eller went 16-23-39, plus-3 in 69 games, but over two seasons since he is 16-28-44, even, in 85 games.  His offensive production has dipped a little more of late, going 2-2-4, minus-7, over his last dozen games.  In an odd way, though, his production does not seem to have mattered a great deal to the Caps in terms of wins and losses.  Eller has goals in eight games this season, but the Caps are just 3-4-1 in those games.  He has as many goals in regulation and extra time loses (four in 21 regulation and extra time losses) as in wins (four in 20 wins).  In the 19 games in which he has points, the Caps are 10-4-5.  And when his ice time climbs over 20 minutes, bad things happen.  Washington is 1-2-3 in the six games in which he topped 20 minutes.  There seems to be no statistical category in which his production is attached to winning.  Nor losing for that matter, making it an odd season of sorts for Eller.  He is 6-2-8, even, in 12 career games against Montreal.

Since 2005-2006, the Caps have the second-best points percentage of any team visiting Bell Centre (18-5-3/.750, trailing only Chicago’s 7-1-3/773 record).  They are 15-1-2 in their last 18 visits to Montreal.  Yes, Alex Ovechkin will sit this one out in observance of Canadian COVID restrictions on border crossing, but the Caps have owned that arena for more than a decade, and are facing a team that is not only the worst in the league this season, but is arguably the worst team in the history of the league’s most successful franchise. There are no excuses here.  Win, and win big, to restore some measure on confidence.