The Peerless Prognosticator is ON THE AIR!!! -- Game 63: Capitals at Hurricanes, March 18th

The Washington Capitals finish up their back-to-back two-game road trip on Friday night when they visit Raleigh, NC, to take on the Carolina Hurricanes.  This game will wrap up the road portion of the season series for the Caps, who won the first game in Carolina, back on November 28th when the Caps broke a 2-2 tie with two goals in the last three minutes, one an empty netter, in a 4-2 win.  The Caps also own a win in Washington, a 4-0 win on March 3rd.

Carolina had a four-game winning streak snapped on Sunday when they lost in Pittsburgh to the Penguins, 4-2.  They will face the Caps in their own back half of a back-to-back set of games after they visit Toronto in a matchup with the Maple Leafs on Thursday night.  But while the Hurricanes are carrying a three-game losing streak on the road into Toronto (0-2-1), they are an extremely formidable team on home ice.  Their 23-4-2 record at PNC Arena is third-best in wins, third-best in points earned (48), and second-best in points percentage (.828).  They do it largely with defense, their 2.03 goals allowed per game on home ice being the best scoring defense on home ice in the league.

That defense starts in goal with Frederik Andersen, who is having the season of his life.  His league-leading 2.06 goals against average among the 51 goalies with at least 1,000 minutes is his career best, topping the 2.29 GAA he had in 2013-2014 with Anaheim.  His second-ranked save percentage of .929 is his career best, clearing his previous career best set back in that 2013-2014 season (.923).  He has three shutouts in 39 starts, within striking distance of the five shutouts he had in 66 starts with Toronto in 2017-2018.

Only five times in 40 appearances has Andersen allowed more than three goals in a game, and he has yet to allow more than four.  Eighteen times he allowed one or no goals.  Only Calgary’s Jacob Markstrom has done so more times this season (19).  By way of comparison, the Caps’ Vitek Vanecek and Ilya Samsonov have combined for 17 such instances (nine and eight, respectively).  And as one might expect, he has performed better on home ice, going 15-3-1, 1.98 (ranked fourth), .932 (third), with two shutouts (tied for third).  Since he suffered a personal three-game losing streak to close November, Andersen has been almost unbeatable, going 19-3-2, 2.07, .930, with two shutouts in 24 appearances.  He certainly deserves consideration for the Vezina Trophy.  Andersen is 5-4-2, 3.05, .904, with two shutouts in his career against the Caps.

There have been 529 skaters to dress for 40 or more games in the league this season.  Only two of those skaters have been on ice for fewer even strength goals than forward Jordan Martinook, who has been on ice for 13 goals at evens in 43 games played.  And even being on the ice for that low number of even strength goals against has not made much of a dent in Carolina’s record.  In the 11 games in which he has been on ice for an even strength goal against, the Hurricanes are 7-3-1.  Martinook has not been a player whose offensive numbers leap off the page, with one exception.  In 461 NHL games, he has 50 goals (8.9 per 82 games).  214 of those games have been played with Carolina over four seasons, with whom he has 24 goals.  Of that total, a full one-third (eight) have been game-winners.  And, in the infrequent games in which he has points this season (10 of 43 games), Carolina is 9-1-0.  Getting ice time seems to agree with him, but as is the case with many players of modest offensive numbers, this might reflect game situations (the Hurricanes defending leads) as much as anything else.  Still, Carolina is 7-1-2 in the ten games in which he skated at least 13 minutes.  While Martinook does not have a goal in 23 road games this season, he does have three in 20 games on home ice so far.  He is 1-4-5, minus-7, in 16 career games against the Caps.

Carolina has not had great need for new blood in their lineup this season.  They have dressed only four rookie skaters for a total of 65 games.  Forward Seth Jarvis has 46 of those games on his ledger.  The 13th overall pick of the 2020 Entry Draft, his 46 games played ranks eighth in his draft class.  He is 8-12-20, plus-7 in the 46 games he played, sixth in his draft class in goals, seventh in assists, seventh in points, and second in plus-minus rating.  He is one of only eight players from his draft class to date to have dressed for at least 40 games.  And, of 35 rookies to appear in 40 or more games this season, only seven of them have been on ice for fewer even strength goals against than Jarvis (22).  Carolina has yet to lose a game in regulation in which he scored a goal (7-0-1), and they are 15-2-2 in the 19 games in which he has points.  Jarvis, who is listed as day-to-day with an undisclosed injury, is without a point but has a plus-1 rating in his only previous appearance against Washington. 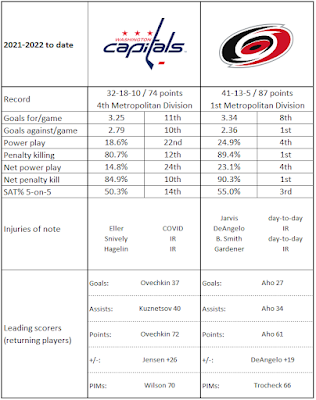 1.  The Hurricanes bring a 13-game points streak on home ice into this game (12-0-1).  In none of those 13 games did they allow more than three goals, and they allowed three goals only four times.

3.  Over those 13 games, the Hurricanes allowed only 1.62 goals per game, fewest in the league over that span.

4.  Carolina and Calgary are the only teams who have perfect records in three-goal decisions on home ice since January 15th.

1.  Since January 28th, the Caps are 16-for-53 on the power play, their 30.2 percent conversion rate ranking third in the league in that span.

2.  The 16 power play goals scored since January 28th are tied for most in the league with Florida and Winnipeg.

4.  Alex Ovechkin is tied for seventh in primary power play assists over that same span (four).

Three Hurricanes are tied for the team lead in game-winning goals this season with five apiece.  Sebastian Aho is one of them.  No surprise there.  Andrei Svechnikov is another.  Not much of a surprise there, either. But who had Martin Necas as the third member of the “five game-winning goals” club?  What makes Necas’ total even stranger is that those five game-winners have come on a total of only nine goals for the season.  And it gets even stranger.  Four of those game-winners came on a total of six goals in his first 22 games, before the calendar flipped to 2022.  Need another odd fact?  His five game-winners to date are almost as many as he had (six) in his first four seasons covering 125 games.  But while he has all those game-winners in a low number of total goals, he definitely as a road tilt to his game-winners, four of them coming on the road, although his most recent game-winner, in a 3-2 win over Seattle on March 6th, came on home ice.

While his goal scoring has an odd character to it, his points profile is rather conventional for a secondary scorer in terms of the relationship with wins and losses.  In the 24 games in which Necas has points, Carolina is 20-3-1.  But there is a bit of an odd aspect of the relationship of his ice time to wins and losses.  In 24 games when skating 16 minutes or less this season, Carolina is 19-2-3.  Necas is 1-2-3, minus-1, in six career games against the Caps.

Chances are, if the Caps are to find a way out of the Eastern Conference in the playoffs to reach a Stanley Cup final, the path runs through Raleigh.  And Washington might find itself facing the Hurricanes on their first stop; if the season ended today, Washington would face Carolina in the first round of the postseason.  The Caps have not been intimidated by the Hurricanes in Carolina, at least in the regular season, sporting a 4-1-0 record in Raleigh since they won the Stanley Cup in 2018.  But the Caps are 0-3 in Carolina in the postseason since winning the Cup.  In that context, winning in Carolina would not be all that surprising, even with the dominance the Hurricanes have displayed on home ice all season.  In that context, give this one to the Caps, but let’s not make too much of it.  More meaningful games at PNC Arena could be in the Caps’ near future.