Capitals vs. Panthers: The Cousins Weigh In on Game 1 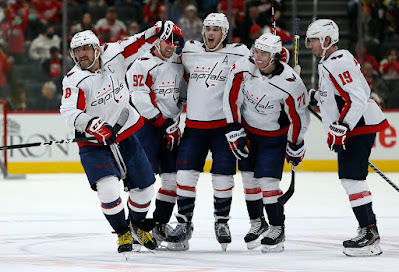 Game 1 of the opening round series between the Washington Capitals and Florida Panthers is in the books, and the cousins have some opinions…

Peerless:  I think all of us can agree, that was a great effort in all three zones for the Caps last night.  Who was your “player of the game?”

Fearless: When Tom Wilson went down to an injury early on, it could have been a deflating moment for the Caps, especially given that he got them off to a good start with his game-opening goal.  But Conor Sheary skated 18:39, much of the last two periods on the top line.  He did not record a point, but two shots, three hits, a takeaway, and a lot of hustle.  He was an example others could (and did) follow.  It was like the Dale Carnegie saying… “If You Have a Lemon, Make a Lemonade."  Sheary did just that, giving the Caps sweet support while a sourness left a bad taste in the mouths of…

Peerless:  Yeah, yeah…we get it.  Cheerless?

Cheerless: We have lemonade?

Peerless: Who was the Caps’ MVP last night?

Cheerless:  Anthony Mantha…Manimal…Man-oh-man what a beast.  An assist, five shots on goal, ten hits.  He brought the attitude, just what the Caps needed to punch the Cats in the snout.

Peerless: What, if there was one, the turning point in the game?

Cheerless: I was at a Turning Point restaurant down in Jersey…had the Wilbur Skillet…don’t know why they called it “crushed bacon,” but it was a life changing experience…

Fearless: It would be tempting to say it was the Nicky sauce to Oshie for what ended up being the game-winning goal in the third period, but I’ll go back to the beginning and Tom Wilson’s power play goal to open the scoring.  It could have been a disaster for the Caps, who had a 61-second 5-on-3 on which they could not score.  But Wilson converting on the 5-on-4 portion of the play set a tone – “we’re here, and we’re not going to be steamrolled.”  And the play itself… getting a shot on goal, keeping the puck in the zone, the pass from Justin Schultz that Anthony Mantha received in his wheelhouse for a one timer…the shot low into Sergei Bobrovsky’s pad to create a rebound…Wilson being the second man back, lurking behind Marcus Johansson who was cutting to the top of the crease…Wilson wasting no time snapping the puck past Bobrovsky’s blocker before he could get reset…scoring the goal with one second left on the power play…it was a fine sequence, start to finish.  The Caps dominated from there.

Peerless: Anything to add, Cheerless?

Cheerless: We have any bacon?

Peerless: OK then… Do either of you think Alex Ovechkin…

Cheerless:  That poke check Ovechkin made on Mackenzie Weevil

Cheerless: Yeah, that’s what I said…”Weeble”

Cheerless: Sounds like you could use some bacon, cuz.

Peerless: Can we get on with it?

Cheerless: OK…that poke check Ovechkin made on the Florida guy…

...after he poked it loose, the Florida guy tried to hook Ovechkin before he could get the puck, but there was Evgeny Kuznetsov jumping up from the other side of the red line to pounce on it, skate in, and score.  I don’t know if Kuznetsov would even have been in the picture frame of that play last season, but he seems much more determined, and he was just cold-blooded with that shot on the blocker side (it this going to be a thing with Bobrovsky?).  Last year, the Caps would have been, “eh, whatever,” and Florida would have just gone back and got the puck back. This year…could be different.

Peerless:  So, back to Ovechkin…how do you guys think he looked?

Fearless: If he’s playing through that upper body injury, he’s doing a good job of hiding it.  I couldn’t tell he was injured.  Four shots on goal, nine attempts, and perhaps most revealing, four credited hits?  Did not look like the line on a score sheet of an injured player.

Cheerless: He was smokin’…like bacon.

Cheerless: That Sam Bennett goal.  Not good…he saw him all the way up the ice and seemed to have a good look when Bennett curled to the middle, but he never seemed quite ready for the shot.  That was a bit of a stinker.   But he did stop the last 20 shots he faced after the Claude Giroux goal, so, all in all…good.

Fearless: Let’s not forget, this was Vanecek’s second career playoff appearance, and his first one -- all 13 minutes of it -- did not go well, ending in an injury. This was his first playoff appearance on the road.  At the 60-minute level of observation, I think he was quite good, calmer and more disciplined in positioning than he was on many occasions in the regular season (defending a net with hockey dimensions, not soccer dimensions with him sliding all over the place).  He should get the Game 2 start.

Peerless: Finally, what are your thoughts about Game 2.

Fearless: I think Game 1 was a game for the skaters, specifically for the Caps and whether they could demonstrate they could control the pace and possession.  They did and made the Panthers look a bit discombobulated on offense in doing so.  I think Game 2 will be a “coaches” game, specifically whether Florida head coach Andrew Brunette, (a) thinks he needs to make adjustments, and (b) if he can.  After all, this is his first NHL playoff series as a head coach.

Cheerless: Sorry, I was thinking about a pile of bacon and a lemonade.

Peerless: That seems like a good place to end.