“We are what we repeatedly do. Excellence, then, is not an act, but a habit.”
-- Aristotle

If John Carlson is not the best offensive defenseman of his generation, he is on a short list.  The flip side of that is that if he is not the most underappreciated defenseman of his generation – even among a sizable number of Washington Capitals fans – he is on a short list. Since he became a full-time player for the Caps in 2010-2011, Carlson ranks sixth in goals scored (131, tied with Mark Giordano), second in assists (456), third in points (587), 12th in power play goals scored (37, tied with Alex Pietrangelo), fifth in power play points (217), fifth in game-winning goals (27, tied with Pietrangelo), fourth in goals for on-ice at even strength (823), fifth in goal differential on-ice at even strength (plus-118), sixth in points per 60 minutes (1.23; minimum: 200 games).  Only Erik Karlsson has more 70-point seasons in that span (four) than Carlson (three).  But he also ranks fourth in blocked shots (1,653) and fourth in takeaways (501).  He is one of 20 defensemen over that period who, in at least 200 games, averaged more than two minutes per game on power plays and penalty kills. 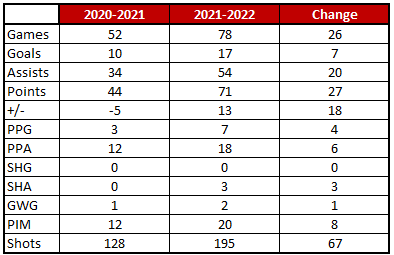 Fearless’ Take… In a run of seasons of offensive dominance by Carlson, he had a career year in goals in 2021-2022 (17), his third-highest assist total for a season (54), his second highest point total (71, his third 70-point season in four years), a career high in power play goals (seven), the most efficient shooting season of his career (8.7 percent), doubled his career best in empty net points (10; he had five in 2019-2020),  He was called upon three time in the Gimmick, scoring the third shootout goal of his career and second game-deciding Gimmick goal.

Cheerless’ Take... Carlson is a minutes eater, but that is not necessarily a good thing.  In 28 games in which he logged 24:30 or more, the Caps were 12-10-6.  Being physical was not necessarily a good thing, either.  The Caps were 10-9-3 in 22 games in which he was credited with two or more hits.  He was on ice for 68 even strength goals against, most among defensemen and second-most on the team.

Game to Remember… December 6th vs. Anaheim.  John Carlson officially had two game-winning goals in the 2021-2022 season.  There was, however, one that did not show up on the league statistical tables.  When the Anaheim Ducks came to Washington in early December, they were facing a Caps team that was on a decent run of success, going 10-2-2 over their previous 14 games.  That last “2” in their record extended a run of extra time misery the Caps experienced over the season to that point, losing all six games in which they went past regulation.

After the Ducks scored three goals in the second period to take a 3-2 lead into the final frame, the Caps look dead as a doornail when the game went into the final minute of the third period.  But with their net emptied in the final minute, the Caps applied forechecking pressure, courtesy of Tom Wilson, who pestered Josh Manson into a ghastly turnover, an attempted pass through the middle that was intercepted by Alex Ovechkin in the left wing circle.  Ovechkin darted to the net, but instead of shooting from the low slot, nudged a pass back to Carlson between the hash marks.  Carlson’s initial drive was stopped by goalie John Gibson, but Gibson could not control the rebound.  Carlson jumped on the loose puck in the top of the crease and swatted it past the fallen Gibson to tie the game with 23 seconds left in regulation.  After a scoreless five-minute overtime, the teams went to the freestyle competition.  In four rounds of the extra-extra session, Troy Terry and Rickard Rakell scored for Anaheim, while Daniel Sprong and Ovechkin scored for the Caps, sending the matter into a fifth round.  Sonny Milano lifted a backhand high and wide over goalie Ilya Samsonov, and the Caps went to Carlson in the bottom of the round with the game on his stick.  Carlson picked up the puck and the center dot and curled to his left.  Cutting in from the left wing circle, he hesitated an instant to get Gibson to commit, then snapped a shot between his pads for the game-deciding goal in a 4-3 win, the Caps’ first extra time win of the season.


Game to Forget… March 28th vs. Carolina.  When the Caps beat the Hurricanes, 4-0, to begin their March schedule, it set them off on a 9-2-1 run that would include another win over Carolina, a 4-3 Gimmick win in Raleigh on March 18th.  When the Hurricanes arrived in Washington to close the March schedule, they were looking to sweep the four-game season series over the Hurricanes.  Carolina had other things in mind.  The Hurricanes scored twice five minutes apart early in the first period to take a 2-0 lead into the first intermission.  The Caps halved the lead on a Tom Wilson goal in the seventh minute of the second period, but any momentum that goal might have generated was snuffed out when, less than two minutes later, the Hurricanes scored a shorthanded goal to make it 3-1.  Carlson was not on ice for that goal, but he was for four others in Carolina’s 6-1 win.  It was a dismal game for Carlson, who finished the game without a shot attempt and a season-worst minus-4 rating.  It might be worth noting that while this game was utterly forgettable, Carlson picked himself up and went 6-10-16, plus-4, in his last 14 games of the regular season, second among the league’s defensemen in goals and points over that stretch.

Postseason… It was a mixed bag for Carlson in the postseason.  He did go 1-4-5 in the six-game first round series against Florida, one of three Caps defensemen to record a goal (Trevor van Riemsdyk and Justin Schultz being the others) and leading the Caps’ defense in points.  But no skater for the Caps was on ice for more even strength goals against (11, tied with partner Martin Fehervary), and he was a third-worst minus-5 in even strength on ice goal differential.  The goal he scored in he Caps’ 6-1 Game 3 win over the Panthers was his first postseason goal since he scored one in the Caps’ 6-2 Game 4 win over the Vegas Golden Knights in the Stanley Cup final in 2018, breaking a 20-game streak in the postseason without a goal.

Looking Ahead… Absent divine intervention, Carlson, who has to be considered a “core” player at this point of his career, will carry his $8.0 million salary cap hit through the 2025-2026 season with the Caps.  It is worth noting that he is the only defenseman on the parent roster signed past this coming season.  If Caps fans (well some of them) are advocating he be traded, trading productive players one of fans’ favorite pastimes, it seems, don’t count on it.  You don’t generally trade 70-point defensemen in their prime when you have no other defenseman with any significant NHL experience signed after this coming season.

In the End… Carlson might not be “Langwayesque” when it comes to defending in his end of the ice, but it often seems he suffers from “Michael Jordan Syndrome”… the guy in the ESPN highlight getting dunked on.  He often seems to be in frame when an opponent scores.  His defense might have suffered some this season from being partnered with a rookie – Martin Fehervary – for much of the season.  Nevertheless, he remains one of, if hot the elite offensive defensemen in the league, although Cale Makar in Colorado seems poised to eclipse, if he hasn’t already, the field of defensemen in the NHL.