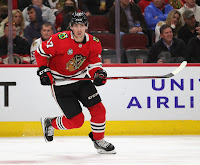 Dylan Strome’s beginning on his NHL journey came in 2015 when he was the answer to a trivia question, “Who was drafted after the Connor McDavid/Jack Eichel debate was settled?”  Strome was taken third in the 2015 Entry Draft after McDavid was taken by the Edmonton Oilers, and Eichel was selected by the Buffalo Sabres.  The Arizona Coyotes were the beneficiaries at the time.  Strome never did find his game with the ‘Yotes, though.  He played seven games with Arizona in 2016-2017 in his first taste of NHL action.  Over parts of three seasons with the Coyotes, he never played a full slate of games, dressing for a total of 48 games and posting a scoring line of 7-9-16, minus-11 before he was traded in November 2018 with Brendan Perlini to the Chicago Blackhawks for Nick Schmaltz.

Chicago was more to Strome’s liking, even if the relationship ended strangely (we will get to that).  In his first two seasons with the Blackhawks, in both of which he played in 58 games, he posted 29 goals and 60 assists, a 21-42-63 scoring line per 82 games.  It was good enough for the Blackhawks to re-sign him to a two-year/$6.0 million contract, but it was a bit of an odd deal in that the average annual value was ($3.0 million) was substantially less than the contract he just completed ($3.338 million, but heavily weighted with performance bonuses that totaled $2.475 million per year).

So Strome, being only 25 years old and about to enter what one usually thinks of as the prime productive years of an NHL career, would be a good candidate to re-sign and build with, right?  Well, no.  Strome was not tendered a qualifying offer and was allowed to depart as a free agent.  Perhaps it was a bet being made by the Blackhawks that they could be bad enough to maximize their chances in the next “Generational Talent Sweepstakes” in the draft (Connor Bedard).  But whatever Chicago’s motivations for letting him walk, he fit right into the Caps’ “win now” approach as a player on the cusp (they hope) of his best years, signing him to a one-year/$3.5 million deal (less than the $3.6 million qualifying offer he would have been tendered with Chicago) after which he will be an arbitration-eligible restricted free agent.

Odd Strome Fact… Chicago was a bad team last year, but it still seems odd that they would have been 5-10-2 in the 17 games in which Strome recorded three or more shots on goal, especially since he had goals in 11 of those games (4-5-2 record).

Fearless’ Take… Strome comes to the Caps at a good time. His assets, as documented by TSN.ca seem to be just that the Caps need – “has a tremendous shot, plus all-around ability, including excellent playmaking skills plus the qualities of a true finisher. His hockey sense is well above-average, too.  Owns a very projectable frame for an NHL center.”   That finishing quality is reflected in an efficient 14.4 shooting percentage in his four full NHL seasons.  He can play any of the forward positions, although it seems likely that he and Connor McMichael will duke it out for the second-line center position behind Evgeny Kuznetsov.  What might be most promising as he moves from Chicago to Washington is that he was 19-22-41 in his last 47 games last season.

Cheerless’ Take… Cuz, maybe we should pump the brakes a little on this guy.  He spent the better portion of the last half of the season last year centering Patrick Kane and Alex DeBrincat, a hall-of-famer in waiting and a gifted finisher.  It makes those 22 assists in those last 47 games seem a bit thin.  And, he faded a bit in the home stretch.  Maybe it was a product of the Blackhawks being long eliminated from playoff contention, but he was 2-3-5 in his last dozen games despite averaging more than 20 minutes of ice time per game.  But this was a player playing for a contract, too.  Not the best of finishes for such a player.  And that description of his career potential at TSN.ca does not inspire total confidence – “talented, inconsistent scoring forward.”  Left hanging is whether the missing language is that he has defensive deficiencies.  He played on some bad teams, but this might be something to watch.

The Big Question… Who is the real Dylan Strome?

Dylan Strome is new and something of an unknown quantity to Caps fans, but he is also a player who seems to be searching for his place in a larger scheme of things.  Is he a supplemental player who can be counted on to post 20 goals and 40-50 points, or is he capable of taking the next big step in his career to becoming a foundational player who might be a 30-goal scorer and perhaps a 60-70 point player?  He certainly seems to have, or at least to have demonstrated, a goal scorer’s touch.  After he was drafted by Arizona in 2015, he recorded 104 goals in 158 games over three seasons with the Erie Otters in the Ontario Hockey League.  He had 22 goals in 50 games with the Tucson Roadrunners in the AHL in 2017-2018.  And, there are the career high 22 goals in 69 games he had with Chicago last season.  What might be most intriguing is his potential on power plays.  Over the last four seasons he has 17 goals and 30 assists while averaging 2:50 in power play ice time per game (at least 2:36 per game in those four seasons).

Whether Dylan Strome lines up at center or as a winger, he is going to be expected to score and perhaps fulfill the promise being a third-overall pick in a loaded draft, as was the case in 2015, suggests.  The Caps have enough depth on offense so that Strome can display the full range of his offensive repertoire, perhaps more so than he could laboring with lesser teams.  Strome is once more playing for a contract, even though he will be a restricted free agent (arbitration eligible) at season’s end.  The Caps are his third franchise as he begins his seventh NHL season.  One hopes he has the kind of season that welcomes a new beginning and a longer stay after a somewhat odd end to his time in Chicago.

Where my concern lies is defensively. At least initially, he had a poor reputation defensively. I don't know how much he's grown in that fashion, but it's vital he perform at least competent.