The Washington Capitals posted a winning record in Week 7, continuing their turnaround two-step over the last five weeks, alternating winning and losing weeks.  The Caps started well with a hard-fought overtime win over the Philadelphia Flyers and a shutout of the Calgary Flames, but playing a third game in four night wrapped around a holiday, playing the second of back-to-back games and against a hot team at that on the road, and the week ended in unfortunate fashion with a loss to New Jersey. 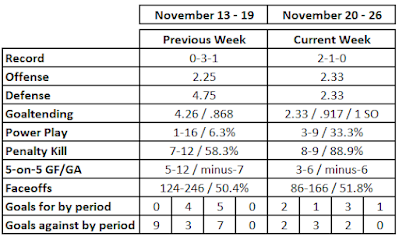 The Caps had their fourth winning record in seven weeks this season.  What was mildly disappointing was that the team had the chance to post their first week this season without a loss in regulation but came up short when they lost to the New Jersey Devils, 5-1, on Saturday night to wrap up the 2-1-0 week.  The loss to the Devils was just the fifth intra-divisional game that the Caps played through 23 games this season.  In posting a 2-2-1 divisional record, that 5-1 loss to the Devils was the second time in two regulation losses that the Caps lost by three or more goals (they lost to Pittsburgh, 4-1, on November 9th).  And, the loss to the Devils, in New Jersey for the second time this season, was the second time the decision was by three or more goals, the Caps winning the first meeting in Newark, 6-3, back on October 24th.  That loss to New Jersey brought an early-season problem in to focus – an inability to win on the road.  The Caps have played 11 road games through seven weeks and are 2-7-2.  Through their first 11 road games last season, Washington was 7-2-2 on their way to a league-best 25-10-6 record on the road. 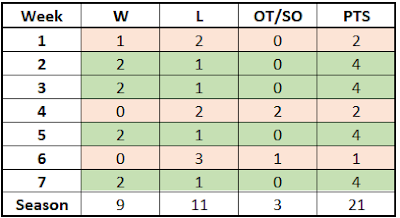 It was not a prolific week on the offensive side of the puck.  The Caps scored three goals once in regulation, two goals in regulation in another, and were held to a single goal in their other contest.  The Caps output, such as it was, was balanced with six players recording the seven goals for the week (Alex Ovechkin had two).  Nine players recorded points, Ovechkin (2-2-4) and T.J. Oshie (1-3-4) leading the way.  The Caps ended the week having recorded more than three goals only once in their last seven games, and they lost in that instance (5-4 in a Gimmick to St. Louis on November 17th.  And the goal-scoring at home is something of an issue.  Although the Caps did score three goals in the two home games in Week 7, they have 21 goals in their last eight games on home ice (2.63 goals per game) after scoring 15 goals in their first four games at Capital One Arena (3.75 per game).  At least every one of the 18 skaters to dress in Week 7 recorded at least one shot on goal, Ovechkin (15) and John Carlson (14) leading the club.

It was a good week on the defensive side of the puck, and it started with shots allowed.  Washington allowed 84 shots on goal for the week (28.0 per game) and held two of the opponents under 30.  The 23 shots they allowed the Flyers to open the week were the second fewest number of shots allowed by the team this season (they allowed 22 to Montreal in a 3-1 win on October 15th).  Even the loss to the Devils was impressive in a way, the Caps allowing the Devils only 38 shot attempts for the game.  The flip side of that, however, is that New Jersey managed to put 29 of those attempts on goal.  It was a bit of an odd week in one respect.  Three Capitals among the 18 to dress were not on ice for an even strength goal scored against.  However, none of Aliaksei Protas, Garnet Hathaway, or Nic Dowd averaged as much as ten minutes of even strength ice time per game for the week.

Overall, it was a decent week, but individually, it was Darcy Kuemper’s week to shine.  He stopped 53 of 55 shots in two games (a .964 save percentage) and posted his second shutout of the season.  That the victim of the shutout was the Calgary Flames should surprise no one.  It was his fourth career shutout of the Flames in 11 appearances against Calgary, and it left him with a 7-2-1, 1.61, .953 career record against the Flames.  What is more, Kuemper was reasonably consistent across games, but especially efficient early and late.  He had a .960 save percentage in the first periods of games (24 saves on 25 shots), .909 in the second periods of games (10-for-11), and a perfect 1.000 save percentage in the third periods of games (19-for-19).

Charlie Lindgren got the call on Saturday night, and he probably deserved better.  Not that he played all that well (the goal from the goal line extended by Jack Hughes was ugly), but the Caps could not translate good underlying numbers into goals to give him more goal support.  Lindgren finds himself in a bit of a slump.  After stopping 151 of 165 shots in his first five appearances this season (.915 save percentage) in going 2-1-1, he stopped just 44 of 53 shots (.830) in his last two appearances, both losses (0-1-1).

After going 1-for-16 in Week 6, a correction of sorts was, if not expected, at least not surprising.  The Caps had their fourth three-or-more power play goal week of the season and their best conversion rate (33.3 percent) since Week 2 (4-for-10/40.0 percent).  Marcus Johansson, John Carlson, and Alex Ovechkin potted power play goals for the week.  Seven skaters recorded at least one power play point with Ovechkin and Johansson each getting a pair.  Five Caps recorded power play shots, Ovechkin finishing the week with eight of the 20 power play shots recorded.  Four other skaters recorded three apiece.  Not that this will surprise any Caps fan, but through seven weeks, no skater in the league has skated a larger share of his team’s power play minutes than Ovechkin, and it is not close.  He logged 95.1 percent of the power play time on ice to date, almost 14 percentage points more than the next player in line, Edmonton’s Leon Draisaitl (81.4 percent).  It is worth noting as well that John Carlson is eighth on that list (77.5 percent), the highest ranking of any defenseman in the league. 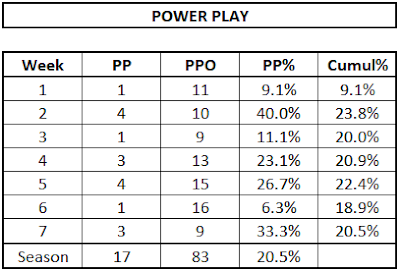 It was a good week on the other side of special teams as well.  The 8.9 percent penalty kill was second-best for the team this season (they were 7-for-7/100.0 percent in Week 5).  What was noteworthy about this week’s penalty kill was 11 skaters logging at least 90 seconds of shorthanded ice time for the week, with only Trevor van Riemsdyk getting more than ten minutes (10:25).  The Caps have also done a good job in holding down chances on home ice.  They faced only nine power play chances for the week, and the four they faced against Philadelphia in the first game of the week is the only instance this season in 12 home games that they faced more than three shorthanded situations in a game.  The efficiency of the penalty kill matters, too.  Overall, the Caps allowed at least one power play goal in 12 games so far, and the team is 1-8-3 in those games. 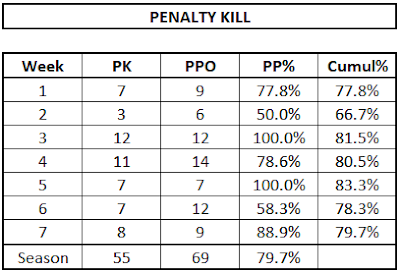 Another positive week in the circle.  One wishes the Caps would show improvement in other areas, but improvement in any area is welcome.  There was a team stat in this area that stood out.  Washington took 74 offensive zone draws in Week 7 and only 48 in the defensive zone, an indicator of ice tilting toward the Caps, at least for zone starts.  Now, if only their efficiency in the offensive zone matched the volume of faceoffs taken.  The Caps were underwater in the offensive zone for the week (45.9 percent), and only Lars Eller (9-for-13/69.2 percent) could be said to have a superior week on draws in the offensive end.  He also was the only Capital taking more than one defensive draw to finish over 50 percent (9-for-17/52.9 percent).  Washington managed, or at least had the good fortune, to have the right guys in the right zones taking faceoffs.  Nic Dowd, more a defensive oriented forward, took only one offensive draw for the week (a loss), and Evgeny Kuznetsov, who often struggles in this phase of the game, took only one defensive draw (he lost).  Of the five Caps to take at least ten draws overall, three finished over 50 percent – Eller (61.5 percent), Dowd (54.1 percent), and Dylan Strome (52.9 percent).

The Caps showed some life in the first periods of games, something that has not come easy for them on offense this season.  The two goals they had in the first periods of games let them break even in the opening 20 minutes.  They struggled in the second periods, going minus-2 over the three games, but they did win the third periods overall and had the overtime goal against Philadelphia (their first OT goal of the season.  Despite the two first period goals, the Caps did finish the week 31st overall in first period goals scored (11), only Arizona scoring fewer (nine, in three fewer games).  And, despite allowing just the two third period goals, the Caps still were tied for having allowed the seventh-most third period goals for the season (29). 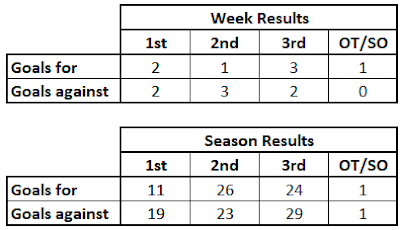 While there was some marginal improvement in some areas in Week 7, the Caps continue to lag significant behind last year’s performance through an equal number of games.  The minus-35 goal differential year-to-year (minus-20 scored, plus-15 allowed) remains a problem and must be improved considerably if the Caps are to contend.  It would be difficult to get that improvement on the offensive side from the power play, which has had more chances this season, more goals scored, and better efficiency than at the same point last season.  Reducing shorthanded situations (eight more this season than last through 23 games) would be a good place to start, despite the decent record in this area noted above.  Two things that stand out as indicators that the Caps are chasing games is the plus-103 in blocked shots over last year and the plus-37 in credited hits, both of which reflect the other team having the puck.  Reducing penalties would be welcome as well, the Caps having been hit with 19 more penalties through 23 games this year than last. 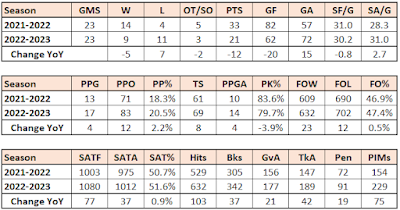 You take the wins when and against whom you can get them.  And, you learn lessons from losses and apply them going forward.  The Caps played well enough to win all three games this week, but the New Jersey game looked from the start like one of those game any team in this league is bound to lose, not matter how well they play or how good their underlying numbers look.  It happens.  The object now is to take a mostly successful week and build on that momentum when the Caps head to the northwest in Week 8.