The Peerless Prognosticator is ON THE AIR!!! -- Caps vs. Canadiens, February 18th

It’s Homecoming at Verizon Center as the Caps return home from a spin around the East coast. Winning five of six possible points from the Rangers, Lightning, and Panthers on the road was just the sort of road trip the team needed, and now the Caps have an opportunity to add to their conference-best home record against the Montreal Canadiens, who the Caps haven’t seen since a Saturday night in early January.

“It was a dark and stormy night; the snow fell in clumps, except at occasional intervals, when it was checked by a violent gust of wind which swept up the streets (for it is in Montreal that our scene lies), rattling along the top of Bell Centre, and fiercely agitating the scanty flame of the street lights that struggled against the darkness.”

Well, we don’t know if it was stormy, but we’re betting it was dark, and made even darker for the Caps by a 5-4 Canadiens win…

“A small assortment of astonishingly fast Montreal skaters raced each other lustily to the respective ends of the distinct ends of the ice as the gates flew open to release a torrent of churned up snow comprised of angry yapping bullets of ice shards that nipped at Brent Johnson’s mask, causing him to reflect once again (as snow splattered his mask as he fought his way to find the puck) that the annual Running of the Pomeranians in Liechtenstein was a stupid idea.”

Is this really necessary?

“The corpse of the beaten Caps exuded the irresistible aroma of a piquant, ancho chili glaze enticingly enhanced with a hint of fresh cilantro as it stretched along the ice, coyly garnished by a garland of variegated radicchio and caramelized onions, and impishly drizzled with glistening rivulets of vintage balsamic vinegar and roasted garlic oil; yes, as they surveyed the players slumped on the ice of the cozy, but nearly empty, arena, a quick inventory of their senses told Joe Beninati and Craig Laughlin that this was, in all likelihood, a really noxious effort.”

Well, it wasn’t the best game they played this year, but let’s get on with this one, shall we?

Through all that literary gumbo, you might remember that the Caps lost to the Canadiens, 5-4, the last time these teams met, costing Bruce Boudreau a trip to the All-Star Game as an assistant coach. Apparently, the hockey gods were not amused by the four-goal third period that snatched the opportunity from the Capitals’ bench boss. Since then, Montreal is 5-11-0 and hanging on for a playoff spot (five points ahead of ninth-place Carolina) more than they are fighting for seeding. The overall numbers paint an interesting picture… 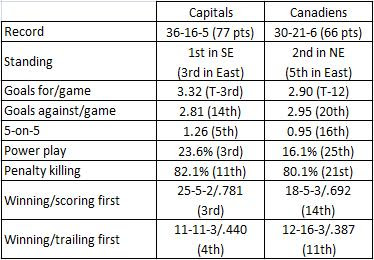 But while it is bad enough for the Canadiens that they trail the Caps in every category above, save for penalty killing, they have had some rather grim results over the last month since the win over Washington:

-- Five of their 11 losses have been by at least three goals.

-- They have allowed more than three goals eight times in 16 games.

-- They have been held to two or fewer goals ten times.

And then there is this. “The team has no need of his services the way he’s currently playing. He’s tired and he isn’t playing with any emotion.” Who is “he?” Alex Kovalev. Who is the author of the statement? Canadiens General Manager Bob Gainey, telling reporters that Kovalev would not make the trip with the team to Washington and Pittsburgh.

This is a team in more than a bit of trouble.

Montreal is a team that is a glass half empty or half full, depending on your perspective. On the one hand, they do have 17 players with at least ten points, nine with at least 20. On the other hand, their leading scorer is defenseman Andrei Markov (7-35-42), and their second leading scorer – Robert Lang (18-21-39) -- is out for the season with an Achilles tendon injury.

On the one hand, Andrei Kostitsyn has 20 goals and is 3-3-6 against the Caps. On the other, his brother Sergei has been reassigned to Hamilton. Despite being among the top ten in scoring for the Canadiens, Sergei hasn’t had a goal since netting the game-winner against the Caps on January 10th.

OK, so Lang’s out, Kovalev is sitting, and both Kostitsyn’s have been accounted for. No other Canadien has more than 11 goals – the one with 11 being Tomas Plekanec, and he’s had only two since getting one against the Caps on January 10th and four in his last 31 games.

Then there is Matt D’Agostini, something of a darling of the press when last these teams met. Well, he’s actually been about as close to a go-to guy as this team has had the last five weeks. He is 4-3-7 in the last 16 games. But he’s also a minus-6, so he hasn’t been immune to the general malaise that has settled over the team.

The Canadiens got the ball rolling on trade wars, 2009 edition, by dealing for defenseman Mathieu Schneider (Atlanta getting a second round pick in 2009 and a third rounder in 2010). For Schneider, it completes the circle, his having played for seven seasons in Montreal after being drafted by the Canadiens in the third round of the 1987 draft. Here is how long ago that is… The players the Canadiens drafted ahead of Schneider by Montreal were Andrew Cassels, John LeClair, and Eric Desjardins. Seen any of them lately?

Jaroslav Halak hasn’t been significantly better. Since getting the win in the 5-4 win over the Caps on January 10th, he is 3-4-0, 3.80, .889. Based solely on their respective records against the Caps, Halak would get this start, but at the moment it hardly seems to matter. They could have Vincent Price or Salma Hayek in goal.

The captain called a players’-only meeting after the Canadiens lost, 6-2, to Calgary last week. It didn’t seem to take. Montreal lost two of their next three. He didn’t play against the Caps on January 10th, as he was out with a foot injury. Since returning he is 3-5-8, -5 in 12 games. He’s had mixed success against Washington in 38 career games, going 7-20-27, -8. Given the problems the Canadiens are having, any reversal of fortune might be expected to begin with the captain.

Semin has had quite a bit of success against Montreal. In 11 career games, he is 8-4-12. He has a pair of goals and an assist in two games against the Canadiens this year. And, while folks have been spending time focusing on the aerobatics of Mike Green, Alex Ovechkin, and even Eric Fehr lately, Semin has quietly registered a point in 13 of his last 14 games (7-9-16, +6). He’s been held off the scoresheet only three times since November 1st (28 games).

Bob Gainey sent a message to the Canadiens by sitting Kovalev and sending Kostitsyn down. Now it's time for the Caps to send a message -- Not here, not tonight. No win for you.

“The bone-chilling scream of Canadiens fans split the frigid winter’s night in two, the first half being before the scream when it was fairly brisk and calm and pleasant for those who hadn't heard the scream at all, but not calm or brisk or even very nice for those who did hear the scream, discounting the little period of time during the actual scream itself when your ears might have been hearing it but your brain wasn't reacting yet to let you know.”

With apologies to all of the Bulmer-Lytton Fiction Contest winners from which we borrowed.
Posted by The Peerless at 3:57 AM

I await the Novel with eager anticipation.

Salma Hayek in goal. Let's visualize that, shall we? After making a dynamic post-to-post split, (goal cam, you are sheer genius) she tilts up her mask and douses her visage with water, shaking off the excess and clearing a stray ebony lock.

You just made my year.

We won't even bring up the chest protector