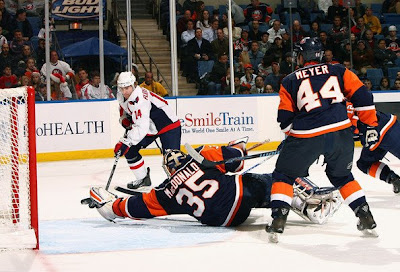 Theme: “Suspense is worse than disappointment.”

Leave it to a Scot to provide the theme for a Czech, but Robert Burns gives us both sides of the coin with respect to Tomas Fleischmann. If you look passively at his line for the season – 19-18-37, -3 in 73 games – you might be inclined to think, “not bad for a 24-year old (he turned 25 two weeks ago) with less than 120 games of experience coming into the season.” In fact, he beat our projection for the year.

However, his season fades somewhat as one starts drilling into his numbers. First, his season by the tens suggests early success and late changes…

In fact, his season does seem to break cleanly into halves. In the first half, Fleischmann played in 32 games and went 12-7-19. He looked as if he’d add his name to the 30-goal scorers that Caps employ. But along with the scoring, Fleischmann was a -11 in those 32 games. Worse, he was a minus player in 14 of those 32 games. It was mixed fruit in terms of results.

In the second half, Fleischmann skated in all 41 games, and his plus-minus improved to +8. But his scoring fell off to 7-11-18. And, if one further decomposes the last half, he was 4-8-12, +13 in the first half of that and 3-3-6, -5 in the latter half. That latter half of games in the second half saw a 14-game streak in which Fleischmann failed to register a point. The slide continued into the playoffs, where Fleischman was 3-1-4, even, in 14 games.

It was not a strong finish.

If one digs even further into Fleischmann’s numbers, one finds… a mess. Scoring? He was fifth among Capitals forwards (minimum: 50 games) in five-on-five points-per-60 minutes. It’s what you’d want from a “top six” forward. But… he was third worst among forwards in goals scored against at five-on-five per 60 minutes. He was second in quality of competition (source: behindthenet.ca). But… he was eighth in Corsi rating, ahead of only the checkers and Brooks Laich.

There are also certain mysteries about Fleischmann’s numbers, and they have to do with special teams. Fleischmann was fifth among forwards in penalty killing ice time per game. One might be forgiven for wondering, “why?” Among Caps forwards playing at least 50 games, he had the third worst goals scored against per 60 minutes total. And given that Michael Nylander and Donald Brashear (the two guys he beat out) skated a total of 1:53 shorthanded all season, well…

The good news, though, is that in just about every respect, Fleischmann improved on his career-best numbers to date. He went from 10 to 19 goals, from 30 to 37 points, bettered his plus-minus from minus-6 (in 2006-2007, but in only 29 games) to minus-3, increased his power play goals from one to seven, increased his game-winning goals from one to four, improved his shooting percentage from 9.3 percent to 14.5 percent, improved his takeaway/giveaway ratio from 1.38 to 1.56.

But while there were statistical improvements, there was a somewhat disturbing aspect to his numbers. He was 12-10-22 in 41 wins for which he dressed, and he was 7-8-15 in 32 losses. While he did score more in wins, it isn’t that large a spread (by way of comparison, to pick a player at random, Viktor Kozlov was 11-21-32 in 43 wins, 2-7-9 in 24 losses). It suggests that Fleischmann wasn’t all that much of a difference maker in terms of his scoring contributing to wins. There are factors that could influence that, such as ice time, participation on special teams, etc. It’s worth noting, too, that the Caps were 9-0-0 in games Fleischmann missed. That’s not the sort of difference-making the Caps or their fans would like to see.

The improvements in Fleischmann’s numbers are indicative of a player who still has upside, and the suspense is in finding out just how much of it there is. But there is also a sense that the season, especially the last 35 games or so (including the playoffs) was a disappointment. Those numbers suggest a player who was running out of gas. Fleischmann might be deemed a bargain at $725,000, but he’s also been given a lot of chances to grab a top-six spot. His numbers to date, including those this year, aren’t at that level of production – his scoring numbers were roughly equivalent among forwards with Dallas’ James Neal and Pittsburgh’s Miroslav Satan. If Fleischmann can cobble together a season that reflected the pace he set in the first half – it would have projected to 32-17-49 – he would be a fairly good complement to the forward lines. But he is also a skill winger on a club with two world-class wingers on its roster. Is Fleischmann one-too-many for his level of production? We’ll see. For this year, though…

Email ThisBlogThis!Share to TwitterShare to FacebookShare to Pinterest
Labels: the tens 2008-2009, Tomas Fleischmann

Hope for a better year for Tomas. I think the pneumonia he got took more strength away from him than anyone likes to admit. So, he ran out of gas.