Week One In The Books 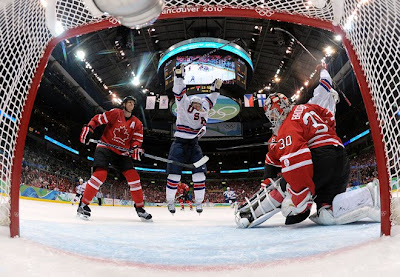 With Team Sweden defeating Team Finland last night/early this morning (depending on your time zone), the preliminary round of men’s ice hockey at the Vancouver Olympics came to a close. And what a way to end it – the “hit heard ‘round Vancouver”… the upset… and the technical marvel that was Team Sweden in the Sweden-Finland contest – made this every bit the “Spectacular Sunday” of ice hockey that hockey fans were hoping for.

As the teams move forward to the playoff qualification round, we can’t help think that today, closing as it did the the first week of competition, had its share of winners and losers…

Let’s face it. Having NHL players in the Olympics hasn’t exactly been a great thing for the ol’ U.S. of A. In 1998 the lasting memory was of “Hockey Players Gone Wild” in Nagano, Japan. There was no medal. In 2002 the Americans could not win gold on home ice in Salt Lake City, settling for the silver medal after getting toasted by Team Canada in the final. In Torino in 2006, Team USA exited in the quarters when they lost to Finland.

Well, this is a new bunch, the youngest team in Vancouver as a matter of fact. One doesn’t want to let yesterday’s 5-3 win over Team Canada in the preliminaries cloud impressions, but there is freshness about them and a work ethic that seems to surround them that wasn’t as evident in previous teams. And, that win over Team Canada was the first by a U.S. team in 50 years. Even if it was the prelims, it was not a trivial achievement.

There is the faint whiff of underachievement hovering about this team, already. It isn’t necessarily a product of the loss to Team USA (the flip side of not wanting to let yesterday’s Team USA win cloud impressions), but Canada limps into the playoff qualification round with a 1-1-1 record, pounding the undermanned Norwegians 8-0, but getting taken to a shootout against the Swiss, then dropping last night’s game to the Americans.

The pressure on Team Canada has to be a burden. This isn’t Team USA in Salt Lake City in 2002. This isn’t even comparable to Team USA in basketball playing in the States during a Summer Olympics. Hockey defines Canada in ways that no sport does in the U.S. And for this collection of talent – arguably the greatest collection of hockey talent under one flag in any tournament in the history of the sport – to have to qualify before going into the final three rounds has to be at the least unexpected. The silver lining is that they certainly have the talent to win four consecutive games. What might be disappointing is that they now have to win four consecutive games to capture the gold.

There was a considerable amount of grief coursing through the Internet last evening about NBC’s decision to carry the USA-Canada game on MSNBC instead of on NBC. But fans did have that option – to see the game telecast live while other programming was being broadcast on the flagship network. There are those of us who remember that in 1980, when Team USA defeated the Soviet Union in the “Miracle on Ice,” ABC broadcast the game (played in the late afternoon on a Friday) on tape delay in prime time. Today we have cable networks that can offer additional outlets, not to mention the sorts of technologies and means to make the game available on a much broader basis. Was it a perfect solution? No – I’d have liked to have seen this game in high-definition – but it wasn’t a catastrophe for hockey fans.

This struck me as a victory, if you want to call it that, of short-term thinking over the long term. Surely, NBC wants to maximize its ratings for the Vancouver games and thought it could do so by programming ice dancing for the NBC network and relegating the Canada-USA game to MSNBC. They made the calculation that in the here and now, more people will watch ice dancing than ice hockey. Go figure. But it says something of the long term that NBC would do this. This sort of thing tells me that NBC doesn’t see much of a future or much benefit to be had as a partner of the NHL. A year from now, a lot of those eye-balls watching ice dancing this week won’t have a care in the world about it. We don’t mean to disparage the athletes or the cadre of fans that is devoted to the sport. However, in the Olympics – summer or winter – there are competitions that capture the attention and the imagination of viewers, especially in the States, but that wane in terms of attention in non-Olympic years. Ice dancing might be among them. If NBC is going to be a real partner to the NHL after these games in the years ahead, then hockey (you would think) would be getting a little more attention from the network. Hockey fans might think that NBC lost an opportunity here, and you could count us among them as yesterday wore on. But as we think about it, we’re just not convinced that NBC sees a lot of promise in the NHL as a partner.

If the idea was to showcase its players, is the league getting enough bang for the buck? As the Commissioner pointed out in an interview after the Canada-USA game, the NHL is the only professional sports league to shut down in the middle of its season to accommodate and participate in the Olympics. You would think that having the best players in the world on the Olympic stage would be something that those who oversee the Olympics would want to nurture. The NHL seems to be getting little for its investment, and it raises the reasonable question of whether the league will be inclined to participate in the Sochi games in 2014.

I don’t remember this level of hitting in an Olympics in the recent past, even with NHL players. Perhaps it is the smaller ice surface (the games are being played on an NHL-sized rink), but there is a lot of hitting and battling along the walls and in front of the nets. And it is taking place at what at times is a frantic pace. The Russia-Czech and Canada-USA games were played at a high-tempo throughout. Alex Ovechkin had the hit of the tournament on Jaromir Jagr, but he was playing like a rampaging beast (in a good way) throughout that game. The Canada-USA game was relentless for its hitting and finishing checks throughout.

Again, this might be the product of the smaller ice surface (and the prevalence of NHL players), but the pretty plays you might expect from this collection of high-end talent hasn’t manifested itself. Guys who aren’t as willing to pay a price aren’t getting rewarded. If you’re not willing to get greasy, nothing’s coming easy.

Elliotte Friedman tweeted for Hockey Night in Canada last night that “this game might win Miller the Hart Trophy.” Maybe that’s a bit hyperbolic, since the Olympics have nothing to do with the letter of the citation for the Hart, but last night’s game cemented Miller’s status as an elite goaltender. He might even be the elite goaltender on the planet at the moment.

Team Canada did not lose to Team USA because Brodeur had a bad game. What he didn’t have, which was surprising, was a good game. He allowed on goal on what was described in the Vancouver Sun as being more akin to a “curling shot.” He allowed three others on shots that hockey fans have seen him gobble up as a snack over the years. We looked at him and, as a Caps fan, had our thoughts go to Olaf Kolzig and the way his career ended with the Caps (his last game being a 5-0 loss to Chicago, after which he would not play another regular season game or playoff game for the Caps). Is this how Brodeur’s Olympic career is going to end? Does Coach Mike Babcock put the fortunes of Team Canada in the hands of Roberto Luongo?

And the legend grows. The hit on Jagr aside (which might not have been as surprising to Caps fans as was his leveling 6’7, 250 pound Hal Gill in a game against Montreal just before the break), Ovechkin was – and has been – finishing checks, hitting players, and being his whirling dervish self on the ice. He is tied for seventh in tournament scoring (second on a loaded Russian team) and is playing a remarkably (given the dominant narrative of his play) complete, two-way game.

Well, not loser, but he hasn’t had a very good week. Yes, he is tied for the tournament lead in scoring, and yes, he did have the game-winning Gimmick goal in Canada’s win over Switzerland. But this is his tournament, his Olympics. It is a lot of pressure to bear. But he ended the week deflecting the puck into his own net for the first Team USA goal on Sunday and is a minus-1 for the week.

If you’re going to yap about hating the other team, you’d better stand up and be accounted for when you have to play them. Kesler did, in spades, against the Canadians on Sunday. He topped off the scoring of the 5-3 Team USA win over Canada with probably the hardest working empty net goal you will ever see, outhustling Corey Perry to a sliding puck in the Canadian end and driving home the last nail into the team he said he hated. But before that he might have been the hardest working player for either side on the ice. He was finishing checks, pressing the Canadians in the own end, blocking shots. This might be his coming out party…well, if more people could see it.

OK, how many people know that he hasn’t given up a goal yet for Team Sweden? 120 minutes,41 shots, no goals, including staving off two 5-on-3’s against Finland. Lundqvist is representative of Team Sweden, which almost seems like a forgotten team in this tournament.  Pay attention!

We couldn’t stand Roenick as a player. We love him as an analyst. He speaks his mind in an unvarnished manner, and it is refreshing, as is his willingness to mix it up with Mike Milbury.

Why? Because we still can’t stand him.

The first week was quite a feast for the hockey fan and as good an introduction to the sport as you could hope for, for those folks looking in for the first time. The stakes are higher this week. It is single elimination now, and it becomes more of a goaltender’s tournament. A hot goalie can carry his club to three (or four) wins, and one bad goal could spell doom.

Canada has the hardest row to hoe to get to the goal medal – if they beat Germany, they have to beat the Russians, and then they are likely to face the Swedes before the gold medal game. Team USA might have the easiest path to the final, getting the winner of Switzerland-Belarus, then probably Finland or Czech Republic. But when it’s single elimination, the “bracketologists” might end up with egg on their faces. After all, how many people thought that the Canada-Russia game, if it occurs at all, will come in a quarterfinal?

Fasten your seat belts. It’s going to be quite a ride this week.
Posted by The Peerless at 2:50 AM

Great post agree with it all though I'd have handled your last point a little differently...

Why? - Because he is one, all the time...seriously...ask any Islanders fan for a start...

believe me, it was tempting...

Awesome work this week Peerless! This round-up is great reading.