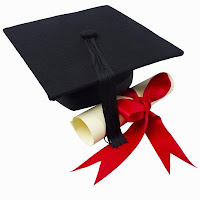 It was “getaway day” at Kettler Capitals Iceplex as the prospects treated a standing-room-only (as in standing outside, in the parking lot) crowd to a full scrimmage this morning.

What the scrimmage -- a 3-2 shootout win for Team White -- lacked in offensive fireworks, it made up for with tenacity (who would want to exit a loser for the week?) and a pair of bouts. Joe Finley and Anthony Pisano reprised their contest from earlier in the week, and after much spinning and many thrown (if unsuccessful) punches, we would have to score the bout a draw.

The second bout, taking place immediately after the first, got off to an odd start. Actually, it almost started before the first one was over. As Finley and Pisano were being separated, Cody Eakin and Trevor Bruess (yea, him again) were shoulder to shoulder, skating toward the bench and looking to be yapping at each oterh. Eakin took a half-hearted slash to Bruess’ ankles, and Bruess returned the favor. Then, Stefan Della Rovere skated toward Bruess and barked at him for a bit. Before the ensuing faceoff, Bruess dropped his gloves and paused as if he had an equipment problem, or he was going to tie his skates. That just gave Della Rovere the chance to ready himself for what was to unfold. This was the more energetic of the two bouts, with more punches thrown (and landing). Uppercuts seemed to be the preferred punch, and Della Rovere connected with one that appeared to bloody Bruess’ nose (we later saw messages that Bruess’ nose was broken, although he did return… hockey players, y’know). We would have to give SDR the nod in this one.

As for the scrimmage itself, it was a very different affair that the other two in that there was a lot less freewheeling (especially among the more gifted Russians – Evgeny Kuznetsov and Stanislav Galiev). This scrimmage featured a good deal moiré in terms of fighting for territorial advantage, and there was a lot more play in the neutral zone. Whereas the ice seemed tilted to the Team Red (Group A) side of the ice, owing to Team White’s (Group B) superior forechecking, in the first two scrimmages, things were much more even this morning. Although, we would still give Team White the edge on that score.

It was a morning for the grinders, in a way. Free agent invitees David deKastrozza (Red), Eric Alexander (White), and Andy Miele (White) each potted goals. Phil DeSimone (a third-round draft pick from 2007) completed the scoring in regulation. The shootout, being the “skills competition,” so to speak, could have ended up being a showcase for the more offensively gifted players. And, in fact, Stanislav Galiev and Cody Eakin, whose skills seem to trend that way, converted their chances. But it was left to Andy Miele one more time to break the tie, and break it he did by faking goalie Braden Holtby to the ice and tucking the puck safely around his right pad for the win.

It was a war of attrition, as it turned out, as several players sustained injuries. There was Bruess’ apparently broken nose, a concussion for Jake Hauswirth, a leg injury for Anton Gustafsson, Eric Alexander going face first into the boards (but did return), as well as Della Rovere (who also returned).

If Miele gets the first star of the game among the skaters, we thought Dan Dunn (White) had a fine game in goal. He played the third period, overtime, and the shootout, and the only puck he allowed to pass was off the stick of Cody Eakin in the Gimmick. He faced much more difficult chances than did his counterpart Braden Holtby in the third, and was adept at controlling rebounds and steering pucks into the corners.

Among the draftees and other players under contract, for the week, we took notice of Stefan Della Rovere and Trevor Bruess for being as advertised – a royal pain to play against. We think Della Rovere is further along the development curve than Bruess, but we could not help but think he is going to have to improve his game within the rules quite a bit to have a legitimate shot at making the big club down the road.

Cody Eakin had what looked to us a good week. He is a tricky little cuss in the offensive end and looks to be a good skater.

Marcus Johansson looked to have a somewhat uneven week to us and for many of the same reasons Nicklas Backstrom had one a few years ago. His unfamiliarity with the smaller ice surface seemed to affect him, as did his uncertain approach to positioning as he gets used to a somewhat different set of responsibilities as a center on this side of he pond.

Evgeni Kuznetsov and Stanislav Galiev both impressed with their skating and stick-handling. We think that overall, Galiev might have had the stronger week in the end. Kuznetsov seemed to lose some focus at the end of the week, and he had a very average scrimmage this morning.

Anton Gusfasson looked better than in any previous camp setting. He looked quicker, and he looked more energized for the most part. But he needs to be a better finisher and disappear less.

We thought Dmitri Orlov took a step back in this camp. He looked a lot more promising last summer. He still demonstrates skill, but he didn’t seem to have the same sense of urgency about his effort this year. We could say the same about Jake Hauswirth. Neither stood out the way they had in the past.

Dustin Stevenson had an interesting week in a “Jeff Schultz” kind of way. He’s a big fellow – 6’5”, 220 – but he played a relatively quiet game, depending on positioning and his reach more than the big hit. We thought he had a nice week all around.

Among the goalies, Braden Hotlby looked alternately tired and off his game. He has, by quite a margin, the best skill set in this camp among the netminders. That is a product of his experience, having played significant minutes in Hershey this season (which probably accounts for the tired part). But he didn’t sparkle the way one might have expected him to in this setting.

We thought Dan Dunn looked very good. He seemed to use his size better than we remember seeing him in previous camps, and his glove hand was very good as well.

Among the free agents in camp, one could not help but see a different kind of effort among them, the sort in which they try to set themselves apart, get noticed, and perhaps end up with a contract of their own. Wade MacLeod, Andy Miele, Eric Alexander, Cameron Burt, Sean Wiles (who missed a breakaway and hit the post twice in today’s scrimmage), Patrick Cullen, and Chris Bond all had their moments.

But in the end, it was quite the entertaining week. And we appreciate the chance to watch such talented young men chasing their ambitions. To all of them, thanks guys and the best of luck to each and every one of you.

Some final pics from today’s festivities… 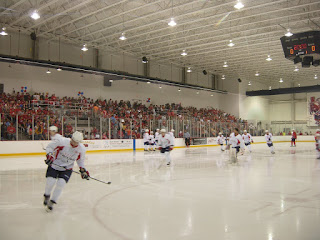 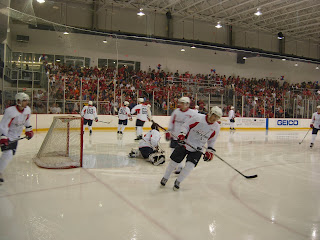 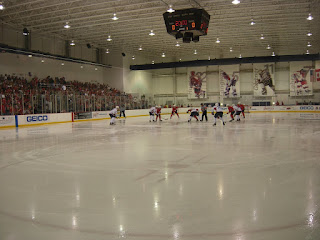 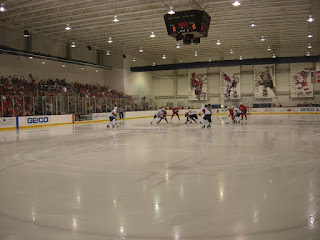 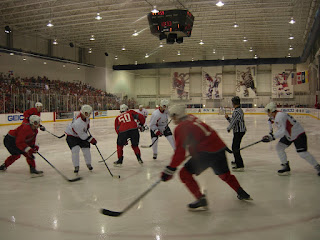 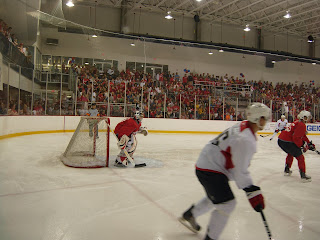 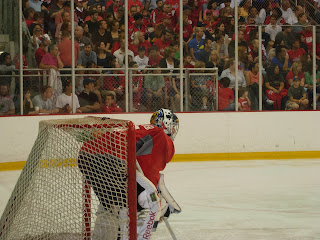 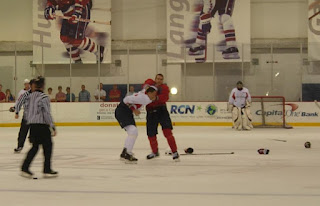 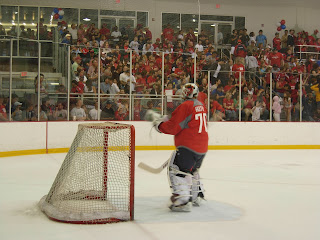 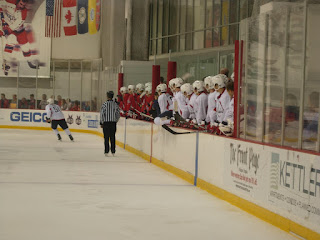 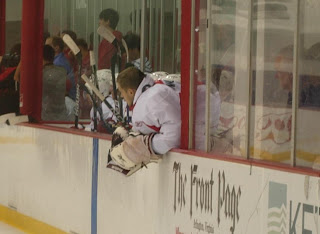 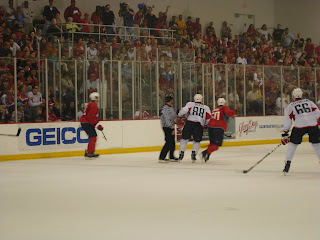 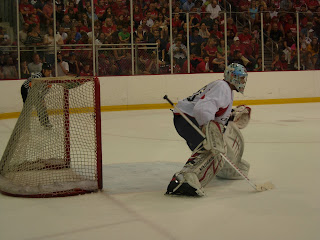 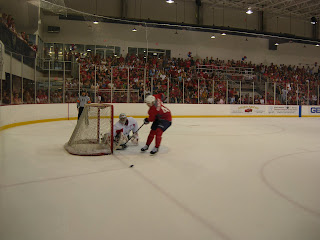 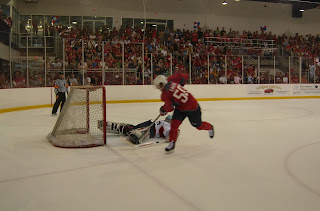 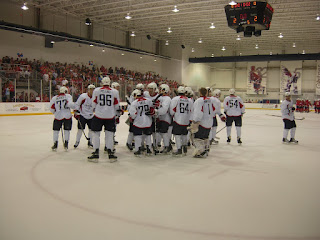 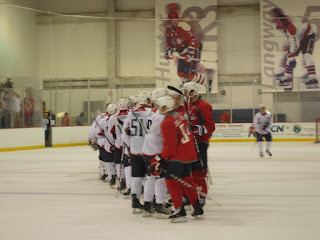 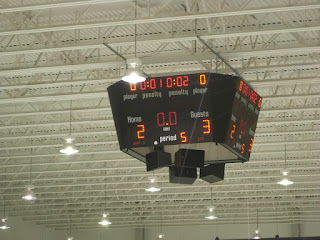 Last year, Orlov was mostly paired with John Carlson, so that may have something to do with it...

Orlov looked pretty good quarterbacking the OT powerplay--he has a rocket and moved the puck really well even on ice that had seen 20+ minutes of wear (and wasn't great to begin with). Aside from a notable hit near the blueline, I can't say he did much memorable in his own end of the ice.

Stevenson definitely had a good final scrimmage, but I must disagree on one point: He was definitely more physical than Schultz. Where Jeff would pin a forward against the boards and use body positioning to keep him there, Dustin would paste the forward to the boards and watch him crumble to the ice. There was talk he might start in Hershey this season, and I'd love to see him get that chance.