Hockey in July. It doesn’t have quite the ring as “Parade in June,” but it will do on a hot steamy day in Arlington. The on-ice portion of 2011 development camp opened for the Washington Capitals this morning as the Caps of tomorrow (more precisely, half of the Caps of tomorrow, since there are two Groups) took the ice at Kettler Capitals Iceplex to show the coaching staff and a throng of several what they can do.

The morning session started at 9:45, and for the record, Dustin Stevenson was the first Cap on the ice. From there, it was the journey into the unknown for the assembled prospects. Although some of these youngsters have been to a camp or two, the first day of camp always seems to have that “first day of school” look to it – am I where I’m supposed to be? Am I skating where I’m supposed to skate? Am I doing this right?

But when the guys turn to the battle drills, where they compete against one another, you start to get a feel for who is further along, for the players who, even is a practice, seem to think and operate at the speed of the game a little more effortlessly and without thinking about where they need to be (and perhaps who they need to impress).

One would expect Cody Eakin to do well in this setting, and the forward seemed to do just that. As a 2009 draft pick he is a veteran of these things, and he is a player with tournament experience. These camps aren’t likely to be intimidating. Watching him working in the corners, he wasn’t rushing things or trying to play the game above its speed. Rather he seemed to make the deliberate and correct plays in moving the puck around the end boards, pushing the puck back to the points, or fending off a defender.

If Eakin’s performance on Day 1 might have been expected, perhaps that of defenseman Patrick Koudys would not have been as expected. But Koudys looked to have an ability to move the puck out of danger, and he is – as the development guide indicates – a very good skater. He will be one to watch as the week goes on.

Philipp Grubauer was at last year’s camp, and this year looks to move up a notch on the prospect chart. Although this morning’s action did not place a premium on goaltending, he looked quite fluid and comfortable in his crease. He was adept at directing, as opposed to just deflecting, pucks away.

If there was a disappointment from a spectator’s point of view, it was that the old D-camp perennial – the “herbies” – were not performed. The boys did a group skate to wind down from the morning session, thus depriving us from posting another in a series of Dmitry Kugryshev sightings (we kid, young man, because we love – keep plugging). Well, there is still rookie camp in September for that sort of thing. Meanwhile, a few pics… 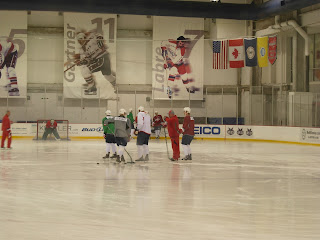 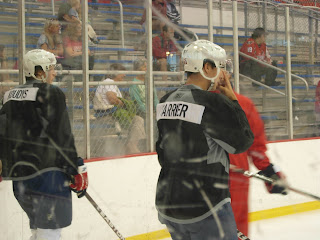 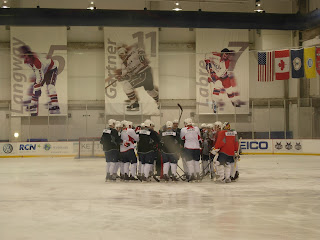 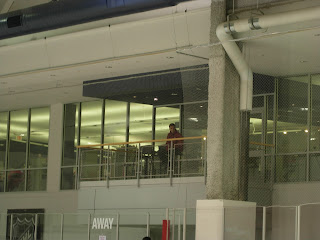 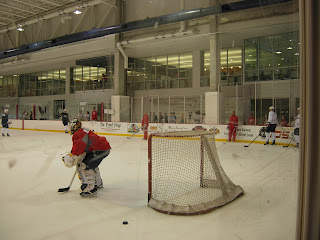 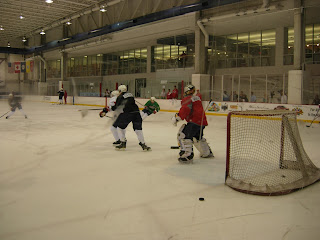 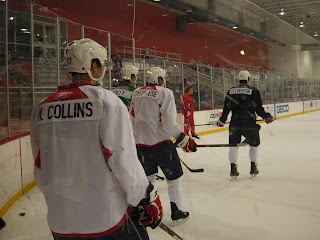 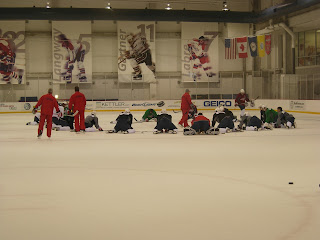 You could hardly do better on a hot July day than spending some time in a cool rink checking out the future.
Posted by The Peerless at 8:33 PM