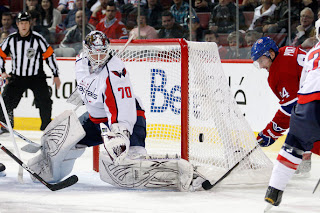 The Background: The Caps and the Canadiens each found March to their liking. The Canadiens were on a 6-1-0 run dating back to February 26th, allowing them to put some distance between themselves and the New York Rangers for sixth place in the Eastern Conference. Meanwhile, the Caps were on an eight-game winning streak dating back to February 26th that allowed them to close within one point of the Philadelphia Flyers for the top spot in the East. This would be the first visit to Bell Centre for the Caps since they lost Game 6 in the first round of the Stanley Cup playoffs.

Why It Mattered: Carey Price had not compiled an especially sterling record against the Caps coming into the 2010-2011 season – a 2-1-3 win/loss record with a goals against average of 3.53. It didn’t improve much this season, his splitting two decisions in Washington – a 3-0 loss on December 28th and a 3-2 Gimmick win on February 1st at Verizon Center. But he was on a roll coming into this game. He earned the decisions in each of the Canadiens last six decisions, going 5-1-0, 1.17, .965, with two shutouts.

Price wasn’t the only goaltender on a roll. At the other end, Braden Holtby took over for Michal Neuvirth in a March 7th game against Tampa Bay when Neuvirth took a puck in the mask, snapping a metal support on the cage of his mask and injuring his eye. Holtby stopped all 21 shots he faced in that game to get the decision in a 2-1 Gimmick win, which he followed up with three more wins that gave him a 4-0-0, 1.05, .965 record with a shutout for good measure.

You wouldn’t know the goalies were on top of their game from the start of things. Both allowed a goal in the first 90 seconds as a result of some wandering. Price circled behind his net to play a dump in by Dennis Wideman, but the puck hit a seam in the allegedly seamless glass, bouncing out to Marcus Johansson for an easy power play goal into the vacated net (one of the assists going to Holtby) at 1:06. The Canadiens got it back at Holtby’s expense 20 seconds later when Holtby circled behind his net to play the puck around and up the boards. But he did not send the puck far enough, nor did he get back into his crease fast enough to prevent Travis Moen from firing the puck into the twine from the left wing boards.

Brooks Laich put the Caps back in front in the 14th minute by finishing a clean crisp play. John Carlson held the puck behind the Caps’ net waiting for Laich to circle behind the cage and start up ice. When Laich cleared out, Carlson sent the puck to the other side, to Karl Alzner at the far edge of the faceoff circle. Alzner sent a long cross-ice pass to a streaking Laich, who had opened up some space on Jeff Halpern. Laich took the puck, and with defenseman Hal Gill trying to cut off Laich’s angle to the net, Laich dipped his shoulder, beat Gill to the crease, and stuffed the puck under Price.

After Andrei Kostitsyn tied things up again in the second period, it was all even again heading into the third period. Neither goalie saw a lot of work – only a combined 14 shots on goal. But it was Price who cracked. Marcus Johansson got his second when the Canadiens, including Price, got caught paying a bit too much attention to Alex Ovechkin, who with a couple Canadiens covering him slipped the puck to Johansson coming down the slot for a backhand past Price.

Mike Knuble closed out the scoring by finishing a 2-on-1 with Marco Sturm on a Caps power play. Meanwhile, Holtby was slamming the door shut at the other end, stopping all eight shots he faced in the third period to seal the 4-2 win. Although Holtby would say later that he “kind of got off to a rough start,” and passed off credit to his defensemen, he stopped 24 of the last 25 shots he faced after allowing a goal on the Canadiens’ first shot.

The Takeaway: The win would be Holtby’s fifth in a row, but here his games played streak would end as Michal Neuvirth returned the following night to face Detroit for the second half of a back-to-back set of games. In this five-game run Holtby won all five decisions with a 1.25 goals against average and a .957 save percentage. Since allowing five goals on 23 shots to New Jersey in a 5-0 loss on November 22nd in his first stint with the Caps, he was 7-0-1, 1.14, .961 with one shutout. He would get one more start, also in Bell Centre against the Canadiens, in which he stopped all 18 shots in a 2-0 win on March 26th.

However, this win cemented Holtby’s status as a bone fide contender to become, if not this year, then perhaps sooner than anyone could have imagined in October, the Caps’ number one netminder. In the story of the 2010-2011 season, Holtby’s performance qualified as “pleasant surprise” more than it did as a factor that would influence the Caps’ ultimate success or failure in this season. But it did complicate a decision that was coming, again sooner than anyone might have anticipated at the start of the season. And that is why Holtby’s performance – staring down a tough opponent in front of a hostile crowd of more than 21,000 – made this a game that mattered in the 2010-2011 season.