Starting the second half of our look at ten games that mattered, it’s a game that looked more like the shoot-‘em-up goal fests of the 1980’s than a game in the NHL of 2011… 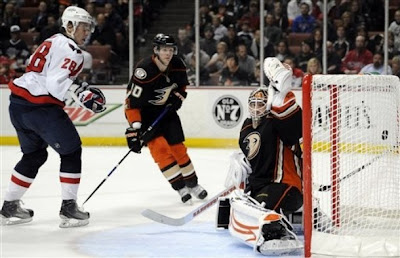 The Background: In the 23 games played after they endured their eight-game losing streak in December the Capitals, who had reformed themselves into a team that emphasized responsibility in their own end of the ice, scored more than three goals in a game only three times. By the same token, they allowed more than three goals only three times. But their offense found itself in a bit of a deeper slump coming into this game – three goals combined over their previous three games, all losses, all to Pacific Division teams.  It looked as if hockey's dog days of the season -- those games in January and February -- had settled in for the Caps.

Why It Mattered: In Anaheim, the Caps would face their fourth straight Pacific Division opponent, and the Ducks were on a four game winning streak, two of the wins coming by shutout. The Caps were already 0-4-1 against the Pacific for the year. Not a recipe for coming out of a slump. It probably looked worse 4:10 into the game when Ryan Getzlaf put the Ducks ahead with a power play goal. It was only the third shot of the game, all of them recorded by the Ducks.

Alex Ovechkin got that one back with a highlight reel-quality goal, taking a long pass from Nicklas Backstrom up the middle as he was hitting the red line, knifing between defensemen Andreas Lilja and Cam Fowler, and as Lilja was trying to hook him off, he snapped the puck through goalie Curtis McElhinney’s legs.

From there it became a game of “anything you can do, I can do better.” The Caps looked as if they would take a lead into the first intermission on an unassisted goal by Brooks Laich when he was handed the puck by the Ducks’ Teemu Selanne in front of the Anaheim net at 16:07. But the Ducks scored two late goals in the first period to regain the lead and chase Caps goalie Semyon Varlamov, who yielded three goals on nine shots. Anaheim went up two to start the second period, potting a goal against Michal Neuvirth in relief of Varlamov.  But then the Caps scored two within three minutes of the Anaheim goal to tie it. Anaheim regained the lead in time for the second intermission, finishing the first 40 minutes with five goals on only 16 shots.

Mike Knuble got the Caps even in the first minute of the third period, but the Ducks took their fourth lead of the game five minutes later. It would be the last lead the Ducks would enjoy, as the last dozen minutes turned into “The Alexander Semin Show.” Semin, who scored the Caps’ fourth goal in the second period, showed fans why he is a gifted talent. Scott Hannan took a feed from Matt Hendricks and circled behind the Anaheim net. Hannan threw the puck in front, but on its way out from behind the net was tipped into the air by Ducks’ defenseman Luca Sbisa. Semin, skating down the middle to the net, took the puck on the bounce and short hopped it off his backhand, roofing it over McElhinney to tie the game.

Semin would score the game winner with 1:47 left. Karl Alzner sent the puck hard around the boards, where it skipped over Semin’s stick to where Brooks Laich and Cam Fowler could fight over it. Laich pushed it ahead to Semin in the corner at the goal line. Semin circled, walked the goal line, stepped out, then backhanded the puck through McElninney’s pads to complete the hat trick (his fourth of the season) and give the Caps a most improbable 7-6 win.

It was a game in which both goaltenders struggled mightily. Consider, the Ducks scored six goals on 42 shot attempts, itself a .857 “unsuccessful” percentage. The “save” percentage of .714 (15 saves on 21 shots on goal) was absolutely ghastly. But the Caps showed a certain resiliency in coming back from four separate Anaheim leads. And it was a team effort – eleven different skaters had points, five different skaters had goals. One of the quirkier numbers in the games belonged to John Carlson – nine. He was on ice for nine of the 13 goals scored, six for the Caps, three for the Ducks. On the other side, Bobby Ryan had that number stapled to him as well, on ice for nine goals -- four for Anaheim, five for the Caps.

"It could be a game that gets us out of the kind of spell we were in. We gave up six goals, so it was really good to score seven and actually win a game the old way, like we were used to winning."

The Caps didn’t so much break out of a spell as they did get it out of their system. It was like the old days – if the 2009-2010 could be thought of in that fashion – but the Caps soon returned to their “be responsible” mode. They would go 11-2-0 over their next 13 games and would allow more than three goals only three more times in their last 24 games.

It was in one sense a trip down memory lane and at the same time a warning, that failure to pay attention to the defensive side of things could have unpleasant results. Based on how the Caps finished the season – a record of 18-5-1 in their last 24 games and just those three games allowing more than three goals – it was an indulgence not repeated and a lesson learned. And that’s why this oddly entertaining game mattered in the 2010-2011 season.

thanks to share this.....i hope i will be big fan of you