And with the seventh in the series of games that mattered in the 2010-2011 season, the goaltending sweepstakes return to front and center… 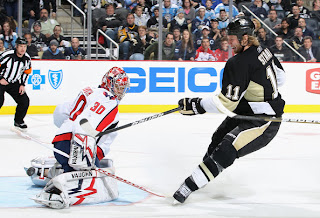 The Background: In an odd quirk in the schedule, this would be the first time the Caps would play in the Penguins’ new palace, Consol Energy Center. Two games in Washington and the Winter Classic at Heinz Field made this, the fourth and last game in the series, the Caps’ inaugural visit to Consol. And these were very different teams than those who faced one another in the first three contests. The Caps had taken on a stingy personality, quite at odds with having the elite offensive talent that led the NHL in scoring. In 20 games since the Winter Classic on January 1st, the Caps allowed 2.25 goals per game, including a 3-0 shutout of the Penguins on February 6th. On the other side, the Penguins were still adjusting to life without Sidney Crosby and Evgeni Malkin, the former out with concussion symptoms and the latter shelved for the season with a knee injury.

Both goalies for the Caps fighting for the number one spot had shaky recent outings, though. Semyon Varlamov was 1-4-2 in his previous eight appearances with a GAA of 2.83 and a save percentage of .908. Michal Neuvirth was 1-3-0 in his previous four appearances, 3.01, .883. The last quality appearance Neuvirth had was the 3-0 shutout of the Penguins on February 6th. This game would give him a chance to repeat his success against the Penguins and perhaps get a leg up in the goalie sweepstakes.

Why It Mattered: These were two teams stuck in neutral in February. The Penguins were 5-4-1 and losers in five of their previous seven games. The Caps were 4-4-1 and losers of four of the previous six contests. Both had a particularly ugly effort along the way, the Caps giving up six goals on 21 shots in a 7-6 win in Anaheim, the Penguins getting pasted by the Islanders, 9-3, ten days before this game.

The Penguins came out as if they were going to take out their accumulated frustrations on the Caps in the first 20 minutes. After recording five hits on the Caps and the only two shots on goal in the first 4:29, the Penguins spent the rest of the first period treating Neuvirth like an arcade game. Sixteen shots on goal, six shots blocked, two misses in the last 15:31. The Caps might have been run out of the building had Neuvirth experienced the same recent trouble he had, but he kept the Caps in it until they could change momentum.

The teams changed ends for the second period, but the ice was tilted in the same direction, this time favoring the Caps. They had eight shots on goalie Marc-Andre Fleury in the first 8:29, but he was as equal to the task at that end of the ice as Neuvirth was in the first period.

It was Neuvirth, however, who would have the most consequential save of the period and the game, however. As the clock was winding down toward four minutes to go in the period and the Caps on a power play, Matt Cooke pitchforked the puck out of the defensive zone and into open ice, where Jordan Staal collected it behind the Caps’ defense. Staal skated in and tried to maneuver himself for a forehand try from in close. But Neuvirth turned the shot aside with his right pad, and the game remained scoreless.

Not for long. Forty-eight seconds later, Marcus Johansson teed one up for Alex Ovechkin, laying out a pass just above and between the faceoff circles. Ovechkin got all of it, pounding a one-time slap shot past Fleury to give the Caps the 1-0 lead late in the second period.

The third period had that tilted ice problem again – nine Penguin shot attempts in the first 4:11 (four on goal) to none for the Caps. The rest of the period looked much the same – the Penguins outshot the Caps 14-3 – but this Caps team was more comfortable in one-goal games than they had been in the past, and they could play defense when it mattered. Neuvirth stopped all the pucks he faced, and the Caps made their power play goal stand up to take the season series with a 3-0-1 record.

The Takeaway: Michal Neuvirth started three games against nine different opponents in the 2010-2011 season. Three of those opponents would be playoff teams in 2011. Against two of them – Boston and Philadelphia – Neuvirth had a distinctly mediocre record (0-2-0, 3.91, .810 against the Bruins; 1-0-1, 3.60, .882 against the Flyers). But against the Penguins, Neuvirth was George Hainsworth*. This would be his third start against Pittsburgh this season (sitting out the Winter Classic in favor of Semyon Varlamov), and he finished 2-0-1, 0.65, .977, with two shutouts.

From here, the final cards would be played in the goalie sweepstakes. Semyon Varlamov would miss 11 games to a knee injury and play in only three more games in the regular season. Neuvirth would get most of the work down the stretch, appearing in 13 of the Caps’ last 21 games. At the time, one could not know with certainty how the race between Neuvirth and Varlamov would be decided. But in retrospect, this game set up the home stretch of the season for what would be a one-horse race. Varlamov would be nursing an injury, and Neuvirth would be getting into a playing rhythm that would ultimately result in his being declared the playoff starter. Neuvirth would have a few bumps along the way as the season wound down, but this game served as the starting point for his own sprint down the home stretch in the goalie race. And that is why a 1-0 game in February mattered in the 2010-2011 season.

* George Hainsworth holds the record for shutouts in an NHL season – 22 with the Montreal Canadiens in the 1928-1929 season.

(Photo by Christian Petersen/Getty Images North America)
Posted by The Peerless at 10:53 AM

That goal celebration is the picture Ovi uses as his Twitter avatar, btw.