Jason Chimera
Theme: “Fast is fine, but accuracy is everything.”
--Wyatt Earp

(click pic for larger image)
In 2010-2011, Jason Chimera seemed at times to lack the ability to find the back of the net with a flashlight and a map, let alone a hockey stick. He finished the season with ten goals, his lowest (on a pro-rated basis over 82 games) since 2003-2004, when he finished the season with four goals in 60 games for the Edmonton Oilers. His 6.2 percent shooting percentage was the second worst of his career, only that 2003-2004 season being worse (5.1 percent).

The 2011-2012 Jason Chimera was rather different. And it started on opening night against the Carolina Hurricanes. Chimera scored a goal at the 19:39 mark of the second period when Karl Alzner dug the puck out from behind the Capitals’ net and sent it around and up the boards to Joel Ward. As Ward was clearing the defensive zone, Chimera was in flight up the right side. Ward fed the puck up to Chimera who used his speed to work past an apparently gassed Tuomo Ruutu. Chimera left Ruutu behind, curled to the middle, and tucked the puck under Hurricane goalie Brian Boucher before defenseman Justin Faulk could cut him off. The goal gave the Caps their first lead of the game in what would be a 4-3 overtime win.

He followed it up with a pair of third-period goals in Game 2 against the Tampa Bay Lightning, including the game-tying goal with only 2:44 left in regulation, in what would be a 6-5 Gimmick win. When he added a goal in a 3-0 win over the Florida Panthers eight days later, he had four goals in his first five games on 16 shots on goal. He was bound to slow down, and did – going eight games without a goal, but he picked it up again with seven goals in his next 13 games. Two of those goals were game-winners (one of them an overtime game-winner against Winnipeg). With 11 goals in his first 26 games Chimera was on a pace to score 35 goals.

It was not a pace he could sustain, though. He scored only five goals in his next 46 games, leaving him with 16 in 72 games. That was an 18-goal pace that was almost exactly in line with his scoring rate going into the season – 17 goals per 82 games. That’s regressing toward the mean. Chimera did have one more hot streak left in the regular season, scoring four goals in his last ten games to finish with 20 goal for the first time in his career. He had only 12 games in which he failed to record a shot on goal, which is respectable for a player largely getting third line minutes.

How did he do it? He shot the puck. The 9.8 percent shooting percentage with which Chimera finished the season was not much different from his career shooting percentage coming into the season (9.0 percent). In fact, he had three seasons with at least 65 games played in which he had higher shooting percentages. But coming into this season Chimera had never recorded more than 198 shots on goal (2007-2008 with Columbus), and his second highest total for a season was 160 (2009-2010, split between Columbus and Washington). In 2011-2012 he recorded 205 shots on goal.

But… there has to be a “but,” doesn’t there? At 5-on-5 Chimera had the tenth best PDO among 15 Caps forwards playing in at least 20 games, largely a product of a shooting percentage on ice that was 11th among that group of forwards. But he also was playing with the highest quality of teammates at 5-on-5. Still, he was 9-5-14, plus-5 in 30 games against the other seven teams qualifying for the Eastern Conference draw of the playoffs. He was not puffing up numbers playing against also-rans. Here is how Chimera’s numbers compare with last year’s: 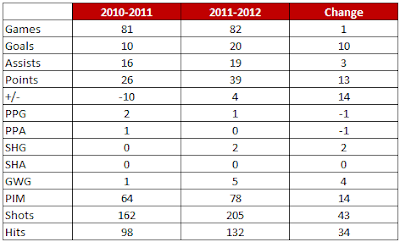 Odd Chimera Fact… Jason Chimera was the only Capital in the 2011-2012 season to record at least one even strength goal, power play goal, shorthanded goal, penalty shot goal, and empty net goal.

Game to Remember… November 23, 2011. Things were not going especially well for the Caps. After winning their first seven games they were 4-7-1 in their last dozen games and losers of four of five going into their game against the Winnipeg Jets on the day before Thanksgiving. The Caps got out to an early lead on a goal by Alexander Semin, but the Jets tied the score eight minutes later. However, on the next shift, Chimera converted a centering feed from Brooks Laich to give the Caps the lead again just 12 seconds after the Jets tied the game. The teams fought back and forth over the last two periods, Winnipeg finally tying the game 12:36 into the third period to send the game to overtime. But just 1:52 into the extra frame, Chimera converted a pass from Dennis Wideman at the goal-mouth to give the Caps a 4-3 win. Combined, the two goals traveled a total of 22 feet.

Game to Forget… January 9, 2012. The Capitals have a long history of frustration in the state of California (25-47-9 all-time coming into this season). The frustration continued for the Caps as they headed to Los Angeles after a 5-2 loss in San Jose two nights earlier. It looked good early for the Caps in this contest with the Los Angeles Kings after Marcus Johansson scored the first goal just 1:34 into the game. But the Kings posted four unanswered goals to take a 4-1 lead into the second intermission. At the 9:45 mark of the third period Joel Ward was leveled by Willie Mitchell in front of the penalty boxes, and Jason Chimera, in what might have been part coming to a teammate’s aid and part frustration with the way the game was going, confronted Mitchell. Chimera might have won the fight on some fans’ cards, but he took a roughing minor penalty in addition to his fighting major, and the Kings added a power play goal to add insult to injury. The Caps ended the night with another loss in California, 5-2, and Chimera ended the night with no points, nine minutes in penalties, and a minus-1 in 11:50 of ice time.

Post-season… Jason Chimera was second in goals, third in points, second in best plus-minus, had the best shooting percentage among skaters with at least ten shots on goal (he was third in shots on goal), and had a game-winning goal in 14 post-season games. If there was an odd statistic, given the way the Caps chose to play in the post-season, it was that he had only two blocked shots in 14 games. Only Mike Knuble had fewer among Caps forwards playing in at least five games. He was on ice for only four goals scored against the Caps in 14 games, tied for third fewest among Caps forwards playing in at least five playoff games. He was at least in the conversation as the Caps’ best all-around forward in the post-season. Good as that may be, it says something about the play of the Caps that a forward getting ice time in the lower teens and who is primarily a checking line forward would be in that conversation. But that is commentary on other players, not Chimera, who did more than his share. It is worth noting that of the Capitals’ 14 wins in the playoffs over the past three seasons, Chimera has the game winning goal in four of them, most of any Capital in that period.

In the end… Jason Chimera had a fine year – a career best in goals (20 and points (39), and tying his career best in game-winning goals (five). He added a dimension often lacking for the Caps this season – raw speed. And he was durable, one of only three Capital forwards playing in all 82 games (Brooks Laich and Troy Brouwer being the others). He was second among all Capitals skaters in shots on goal. He finished the season with the fifth highest total of goals scored against on ice, a respectable finish considering that he was third among Capitals forwards in quality of competition faced (numbers from behindthenet.ca). It might have taken awhile – eleven seasons, in fact – but for Jason Chimera it was a career year.

Email ThisBlogThis!Share to TwitterShare to FacebookShare to Pinterest
Labels: 2011-2012 BY THE TENS, jason chimera, NHL, the peerless prognosticator, Washington Capitals